Your Guide To Summer Flowers: Love-Lies-Bleeding 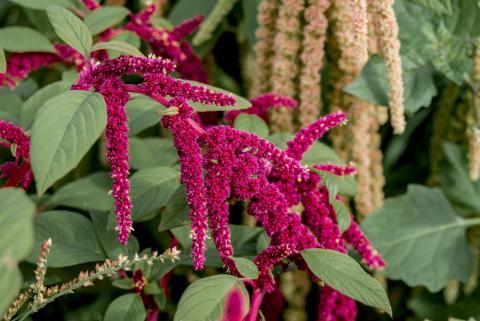 Love-lies-bleeding is a member of the family Amaranthaceae or Amaranth family of the genus Amaranthus L. or pigweed containing the species Amaranthus caudatus L. or foxtail amaranth. The plant is native to South America, India, and Africa and its nomenclature was derived from the Greek word amarantos, translating to “unfading,” due to the long-lasting blooms of some species. They are a drought-resistant annual that does well as a container plant or in a basket and can be staked in a garden as a backdrop, in beds, or as a border plant.

In the Americas the seeds were grown as a food crop and were a staple for many cultures. They also used the plant as a medicinal herb and the Aztec culture used the plant in spiritual rituals. Love-lies-bleeding has a higher protein content than wheat, soy, and corn. The flower was immortalized in works by Percy Bysshe Shelley, John Milton, William Wordsworth, and Henry Wadsworth Longfellow.

Love-lies-bleeding produces minute blood red blooms that have no petals and grow from central and axillary panicles that are narrow and droop downward like tassels. The panicles grow straight down and mature from twelve to twenty-four inches in length. The plant reaches full height at approximately two to four feet. The leaves are oval in shape and are light green in color; they mature to about six inches in length.

Love-lies-bleeding can be started from seeds indoors or planted directly into the garden. If starting the plant indoors sow the seeds six to eight weeks before the last frost. Germination of the seeds can be as soon as twenty-four hours. When planting the seeds directly into the garden be sure to wait until the weather is warm then till the soil and add fertilizer or compost. Plant the seeds from one-quarter to one-half inch deep and twelve to eighteen inches apart since the plant matures to approximately three feet; water to maintain moisture and do not soak the soil. The seedlings will emerge from ten to fourteen days; then maintain moist soil. The plant can be staked or used as a ground cover.

Love-lies-bleeding has been used as a healing herb for centuries. The seeds are rich in iron and calcium and the plant is used to deter parasites and has diuretic properties. It is also used as an astringent. In the southern regions of Ecuador the seeds of the plant were used to treat the symptoms of flu, relieve inflammation, improve blood circulation and liver function, and increase urination. The Cherokee women used the herb for maintaining normal menstrual flow. Studies of compounds from the plant show possibilities in treating arteriosclerosis, relieving pain, and reducing fever. The seeds can lower cholesterol and have antioxidant properties.

The leaves and seeds of love-lies-bleeding are edible. The leaves have a mild flavor and can be eaten raw as an ingredient in salads or cooked in soups, stews, and other recipes. The seeds can be cooked or ground into powder for baking. They can be popped as a snack much like popcorn. When cooked whole the seed texture becomes gelatinous. The popped seeds of love-lies-bleeding can be eaten with honey, added to confection recipes, or eaten as cereal. Roasted seeds are made into a drink in India called atole. In China they use the stems and leaves in stir fry recipes. Love-lies-bleeding in regions of central Asia is used much like spinach and sauteed with peppers and spices. The seeds are gluten-free for a substitute for gluten grains.

Other Fun Facts About Love-Lies-Bleeding