Your Guide To Summer Flowers: Bougainvillea 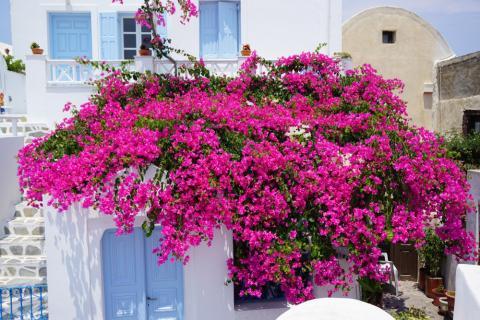 Bougainvilleas are a member of the family Nyctaginaceae or four o'clock family of the genus Bougainvillea Comm. ex Juss. or bougainvillea. The United States Department of Agriculture (USDA) does not list any species for the genus. The plant is native to Brazil and other regions of South America.

Bougainvilleas were discovered by Dr. Philibert Commercon, a French explorer and naturalist in Rio de Janeiro in 1768. Commercon named the plant after the French mathematician and naval officer Louis-Antoine de Bougainville when his ship came to port in Rio de Janeiro and was officially documented in 1789 as “Buginvillea” in the “Genera Plantarium” by A.L. de Jusseau. It was not until the 1930s that the spelling of the nomenclature was corrected in the Index Kewensis. The plant was not brought to Europe until the early 19th century when the commercial trade was established in France and England and was distributed to the world. Today, bougainvillea is the flower of many cities in several countries like Guam, the Philippines, Okinawa, and China.

Bougainvilleas are woody vines that grow thorns, mature from three to thirty-nine feet in height, and are found in the tropical zones of the world. They bloom throughout the year in the warm climates and four to six weeks in cooler climates. The plant produces a tiny white flower in the midst of brightly colored waxy leaves known as bracts. It is the leaves that grow in hues of pink, purple, red, orange, and yellow and not the flowers. The bougainvillea uses its thorns to creep over other plants and to climb along the ground or on vertical surfaces. The thorns are tipped with a black waxy substance. The leaves mature from one to two-and-one-half inches in width and one-and-one-half inches to five inches in length. A cluster of three to six bracts surrounds each group of three flowers.

How To Grow Bougainvillea

There are many ways to grow bougainvillea. They do well in the garden in an area that gets full sunlight in soil that drains well. The plant likes loamy soil with equal parts of clay, sand, and silt that is fed organic matter to nourish the roots. Water the plants when the bracts begin to wilt and the soil becomes dry. As the plant matures and grows it is necessary to prune and train the vine by pinching off the young growing tips of the immature plant to encourage fuller foliage. Bougainvillea can be grown in containers and it is advised to do so in the cooler climates and to move them indoors during the winter months. The dwarf varieties are an excellent choice for those who want smaller vines and they can be made into bonsai plants.

For centuries bougainvilleas have been used as a healing herb because of their phytochemical components that include pinitol, beta cyanine, flavonoids, and alkaloids. They have been used to treat maladies like sore throats due to their antiseptic properties; taken in a tea they minimize the inflammation, relieving the pain. The tea also helps to lessen the incidence of coughs as an expectorant, helping the body to discharge mucus. The flowers also contain antipyretic properties that help to reduce fevers. The purple varieties of the flower are excellent body detoxifiers. Other benefits of the flowers include treating diarrhea, easing joint pain, and relieving abdominal discomfort. They are also a treatment for low blood pressure and they regulate menstruation cycles; they are used to treat hepatitis, relieve the discomfort of ulcers, and help to manage body weight.

There are several varieties of bougainvillea; the Barbara Karst produces color throughout the summer and fall with large clusters of red and can climb approximately forty feet in warmer climates.

Raspberry Ice is a hearty vine that produces deep crimson bracts with green-edged foliage. The Sundown Orange has deep orange bract that fade to coral and mature to a pink salmon hue; the vine grows to a length of twenty feet. They do well grown in hanging baskets and make excellent topiaries.