Your Guide To Summer Flowers: Daylily 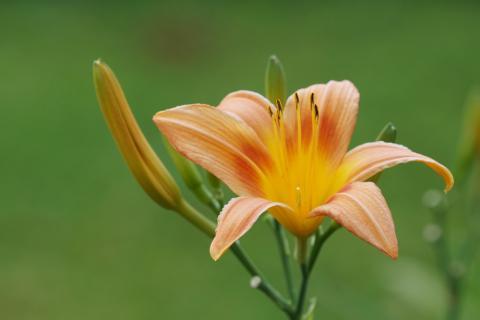 The daylily is a member of the family Liliaceae or Lily family of the genus Hemerocallis L. or daylily P containing six species. The plant is believed to have been in existence since the Cretaceous period approximately 100 million years ago and is thought to originate in Asia from India east and as far north as Siberia.  It is said that it began to evolve about the time Japan separated from the mainland during the formation of the Sea of Japan. Ancient Chinese records dated back to approximately 3,000 years states that daylilies were used as food and medicine and was one of the first plants to be domesticated. The nomenclature of the plant was derived from the Greek word "hemera" meanng day and "kallos" meaning beauty. The first modern breeding of the plant took place in the 20th century starting in the first decade, and by the end of the century 48,354 varieties were created.

The daylily plant can produce up to 500 flowers per season, blooming from five to seven weeks. Depending on the species and variety they can form stars or be shaped like trumpets; they can be round, ruffled, or spin-filled (known as spiders they have long, narrow petals). The flower colors can be orange, red, pink, yellow, purple, off-white, and deep purple that hues to black.

How To Grow Daylilies

Daylilies are one of the easiest plants to grow and do not need special soil or care. They grow from bulbs and flower from midsummer to early fall.  Plant the bulbs in full sun to get the best flower production. Loosen the soil to approximately twelve inches deep, adding fertilizer or compost is helpful but not necessary. Place the bulb with the top or crown that is where the stem will emerge just below the soil line. Cover it with soil and water. They can be planted in wet areas, along fence lines, on slopes, in native or woodland gardens, and perennial gardens. Dwarf varieties make excellent container plants.

The daylily has been used in China as a medicinal herb as a diuretic, a mild laxative, and a sedative. The blossoms were used to calm spasms and relieve the pain of childbirth. The extract from the flower purifies the blood. The plant’s rhizomes help to alleviate roundworms that cause filariasis, also known as elephantiasis in women. The Koreans used the herb to treat jaundice, constipation, and pneumonia. The juice of the root is an antidote for arsenic poisoning and has been used in the treatment of cancer.

How To Eat Daylilies

Daylilies are edible plants that can be eaten many different ways. The tubers can be eaten raw or cooked. The very young leaves and young sprouts can be cooked or eaten raw as a substitute for celery or asparagus. The flowers can also be cooked or eaten raw, and as they wither and close they can be pickled. They are a rich source of iron and can be dried and used as a thickener in soups and other recipes. The petals are thick and crunchy, making them excellent to snack on raw. The buds have the flavor of peas and can be eaten raw, cooked, or dried and used as a relish. The entire dried bloom contains protein, fat, sugar, ash, and vitamin A.

The dried daylily buds should be stored in a sealed jar and placed in a dark, cool, dry spot. When ready to use cut off the bottom of the bud about one-quarter inch to remove the stem, and then soak the buds in warm water for approximately thirty minutes. The dry daylily buds are an ingredient in the popular Chinese entrée known as Buddha’s Delight and are also used in Mu Shu Pork and Hot and Sour Soup.

Other Interesting Facts About Daylilies

Dried daylily buds are usually served on the first day of the Chinese New Year in the entrée Buddha’s Delight to bring good luck. The plant produces many flowers on each stem that last only one morning and fade during the day only to open another flower the next day, making the daylily a continuous blooming plant throughout the season. It is a perennial that is not only hardy but has many species and varieties like the night-blooming Hemerocallis citrina,  the roadside Hemerocallis fulva that is pale orange in color, and the Hemerocallis flava that produces a lemon-scented bloom.