Your Guide To Summer Flowers: Daffodil 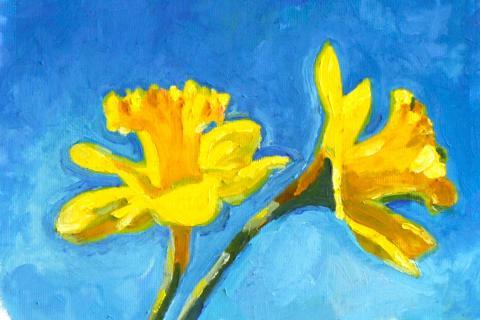 Daffodils are a member of the family Liliaceae, also known as the Lily family of the genus Narcissus L. or daffodil P, containing eleven species. The plant is native to Europe, the Middle East, and Northern Africa, and was cultivated into the present flower on the Iberian Peninsula. The flower then found its way throughout the Mediterranean basin and the pioneers brought the plant to North America. Its botanical name is derived from the Greek word “narke,” meaning intoxicated sleep or numbness, due to the effects of the sedative alkaloids present in the bulb. Daffodils have been used as a medicinal herb for centuries. The daffodil was first classified in the 19th century and was applicable to the large trumpet flowers but the reference was used to include many varieties of the plant. Daffodils have been bred to include numerous species that grow in a multitude of colors and sizes.

In Greek mythology, the daffodil was known as the narcissus because, as the story is told, a young man with the same name was loved by a nymph whose name was Echo but Narcissus did not return her love and Echo hid in a cave and died. The young man who was looking into a pool of water became so intrigued with his reflection he leaned closer to the pool, fell in, drowned, and became a flower.

Daffodils are a perennial plant producing yellow or white blossoms made up of six petals and a trumpet-shaped central corona. The stems are without leaves and the plant will produce from one to twenty flowers. The blooms are fragrant and grow tipped downward.

How To Grow Daffodils

Daffodils are relatively easy to grow. They are usually started from bulbs planted in autumn in slightly acidic soil: six to eight inches deep for larger plants, three to six inches for medium plants, and one to three inches for the smaller varieties. They need full sunlight and the area should drain well. The plant needs to be watered often and low nitrogen fertilizer should be used. Mulching will help to maintain moisture to the plant.

Daffodils do well as container plants. They will last for up to three years in appropriate pots that are from eight to twelve inches in diameter. Plant the bulbs at least eight inches deep (as the roots will grow to approximately twelve inches), placing the bulbs close but not touching. The container should drain well and be placed in a cool, dark spot that maintains a constant temperature for twelve to fifteen weeks, then moved to a sunny but cool spot. Water the plants to maintain a moist soil. When the leaves emerge, place the container in full sunlight that maintains a cool temperature. Daffodils will not flower properly in warm temperatures.

Daffodils are spring flowers that can bloom as early as February through June, depending on the species, variety, and where they are grown. They are a cold climate plant that will continue to produce without cultivation and do not need replanting.

The plant is used as a healing herb in several ways. The fresh root is made into juice and given internally as a purgative or a gentle emetic but is more often ground into a paste to apply on wounds and to take down the swelling and relieve the pain of a sprain.

Daffodils are the flower for the month of March and are said to be the symbol of conceit and egotism. They are the national flower of Wales and have been immortalized in literature. They are the preferred flower for landscaping as they repel the harmful pests that invade gardens. There are toxic crystals produced by the leaves and bulbs that deter rodents and the stems must be soaked in water before being used by florists.