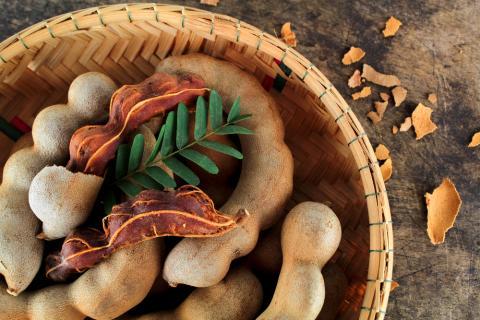 Tamarind is a member of the family Fabaceae ⁄ Leguminosae or Pea family of the genus Tamarindus L., commonly known as tamarind, containing the species Tamarindus indica L. or tamarind. The tree is native to Africa and was introduced to southern Asia in 2000 B.C.E. and arrived in the Americas in the 16th century.

It is a tropical plant that can be found in tropical climates throughout the world and is a staple ingredient in many recipes in India, many regions of Asia, and Latin America. In the cuisines of Asia and in Latin America it is an essential spice and the wood of the tree is used to make furniture and as a fuel in factory ovens. The tamarind seed oil is used in the production of paints. In India it is a decorative tree and lines the roads to provide shade. Tamarind is known by several names; the most common is Indian date but each country has its own nomenclature like “asam” in Malaysia, “imli” in India, and “Ma-kham” in Thailand. The pulp, seed, and bark of the tree are used in many healing applications.

Tamarind is a coniferous tree that will mature to a height of approximately 100 feet and can live to about 200 years. It is a slow-growing tree that has a short trunk that can mature to approximately twenty-three feet in diameter with strong branches that droop. The leaves of the tree are soft and light, growing to a length of approximately six inches in clusters of ten to twelve leaflets and resemble those of the acacia tree. It bears a brown pod that curves slightly and matures to four to six inches in length. Its pulp tends to be acidic and maintains its acidity as it matures.

Tamarind is rich in nutrients that include vitamin B1 (thiamin), which promotes the production of red blood cells and benefits the cardiovascular system, reducing the risk of developing diseases like anemia. Vitamin B6 (pyridoxine) boosts brain function, strengthens the immune system, and controls the effects of diabetes. Vitamin B12 (cobalamin) lowers the risk of developing cancer and helps to rid the body of toxins and allergens. Vitamin C builds a strong immune system and inhibits the development of cardiovascular diseases. Vitamin K aids in blood coagulation, thus preventing humoring by rapid clotting. Potassium regulates the heart rhythm and maintains blood pressure. Magnesium provides healthy nerve and muscle functions and aids in the metabolizing of blood sugars. Calcium is essential for the health of the skeletal system and teeth and also regulates blood pressure. Iron aids in the production and repairing of red blood cells. Phosphorous is another mineral that improves skeletal health and repairs and maintains proper body growth.

How To Grow Tamarind

Tamarind trees do not require a lot of care and they will prosper in many types of soil conditions, ranging from sandy, rocky soil to deep, fertile soil, and will withstand salt spray if planted near the ocean. Tamarind is a tropical tree that does well in full sunlight and young trees must be protected from the cold.

Start the tree from seed, planting it in the spring thirty to sixty-five feet apart and one-half inch deep. Keep the soil moist and gradually reduce watering but do not water during the winter season. In late winter prune during the first two years, leaving three to five strong branches and cutting back the smaller branches almost to the trunk. Then regularly prune back weak and dead branches to increase airflow. During the first three years apply fertilizer in the spring. The tree produces fruit in approximately twelve years and matures in early spring but should be left on the tree for about six months to reduce the moisture content before harvesting.

Tamarind is a versatile food that can be prepared in many ways and is an ingredient in many recipes. In Mexico the fruit is removed from the pod by hand or the pod is soaked in the cooking water and run through a sieve before cooking. It is used in soup, jam, and dessert recipes. It is an essential spice in Thai recipes and is used in many applications in Southeast Asia: dried, salted, candied, and as a cold drink, for example.