4 Herbs To Get Your Lymph System Going 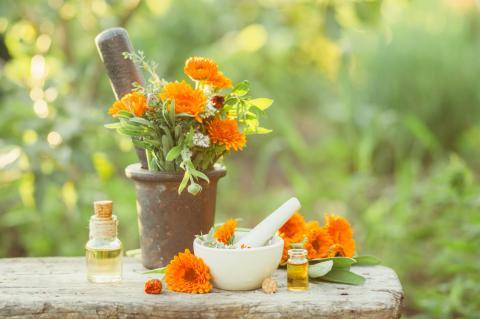 Many folks aren’t in the habit of paying attention to the lymph system. Hopefully, that changes, because the lymph system is critical for dealing with infections and for recycling multiple substances (hormones, antibodies, plasma, and more) back into the bloodstream. Our cells expel wastes into the surrounding fluids, and the lymph system is important for soaking these and other toxins up for elimination from the body. Encouraging healthy lymph system function is a traditional approach for skin problems, menstrual cycle imbalances, cold and flu support, and many other issues given the broad reach that the lymph system has in the body.

So, what exactly is the lymph system?  It’s a network of vessels and (usually bean-shaped) nodes that carry and filter lymph, a watery fluid. Lymph isn’t pumped by the heart. Instead, lymph vessels are surrounded by smooth muscles that pulse periodically to push the lymph along. When we move, our skeletal muscles also help move lymph.  The lymph is eventually dumped into the circulatory system.

As lymph flows through the lymph system, it passes through the lymph nodes, which filter out foreign particles, debris from infection and such. The tonsils, spleen, and thymus are famous lymph nodes. We also have many lymph nodes under our arms and in the abdomen and groin. When we have “swollen glands” what we’re actually dealing with are inflamed lymph nodes. This is not unusual, especially when sick and the nodes close to the infection are working hard. However, if you notice you have a chronically swollen gland somewhere, go see your doctor, because swelling may be due to more serious issues, such as lymphatic cancers.

“Lymphatics” are a category of herbs that help with these various processes.  Here are some of my favorite lymphatic herbs.

Calendula is a beautiful and easy-to-grow lymphatic herb.  Calendula brings us back to infections for a moment.  Lymph nodes store white blood cells that can be quickly mobilized to fight an infection. These immune cells can travel to sites of infection via lymph vessels. This is also a site where the immune system is trained to recognize microbial targets. As such, the lymph system is part of the immune system.  Other white blood cells hang out in lymph nodes and eat up the dead immune cells, bacteria, and such that accumulate during an infection.

Calendula is a great lymphatic herb that helps mobilize these immune-related activities. It’s also anti-microbial, being used traditionally for bacterial and fungal infections either topically or internally. In lab studies, calendula stimulated phagocytosis—the “eating” of bacteria, cellular debris, or foreign particles by certain types of white blood cells that act in part as “garbage disposals”.  Calendula also stimulates lymph node draining, which is useful during infection to reduce lymph node swelling and discomfort, including during ear infections.

Red root is another beautiful lymphatic for which there are many species in the wild as well as in garden shops. You may have heard of “New Jersey Tea,” which is Ceanothus americanus, native to many places in North America.  California alone is home to at least 30 species of red root.

Red root is a cooling lymphatic that’s great for lower body stuff: PMS-related bloating and general stagnation in the pelvic girdle.  That said, it’s a good systemic lymphatic as well, for instance pairing well with Echinacea for swollen glands in the throat and helping out with skin issues.  Red root improves both lymph system function as well as blood flow, making it particularly useful for improving collection of cellular wastes by the lymph vessels and movement of wastes to sites of elimination from the body.

Red root is a fast-acting lymphatic—maybe too fast for some folks, who may feel a bit off when using it during a cold.  To avoid this, use the low end of the recommended dosage range or add it to a formula. If still a problem, switch to a slower acting lymphatic like cleavers (see below).

Another note on red root. It’s a great lymphatic to keep in mind as we come into the holiday season…those frontal “liver headaches” we get from too much rich food and/or alcohol may be helped by red root.

Cleavers can be found along shady streamsides. They’re called cleavers because they stick to your clothing.  Cleavers are the lymphatic that herbalists often reach for when seeking upper body support…PMS-related breast tenderness, fibrocystic breast issues, sore underarm lymph nodes, ear infections, and sore throats. Though great for upper body stuff, cleavers also work systemically for issues such as uric acid accumulation (gout), skin issues, and bloating associated with PMS (for example, breast swelling). The diuretic activity of cleavers is also helpful for all of these issues.

Cleavers are a cooling, nutritive green.  While calendula and red root are fine as dried herbs, cleavers are best used in fresh form, such as a fresh plant tincture or pressed juice preserved either with alcohol or by freezing.  To freeze the juice, simply use an ice cube tray. Once frozen, you can store the herbal cubes in an airtight container and plop one in hot water to use.

Chickweed is a cooling, anti-inflammatory and nutritious lymphatic that’s also a mild diuretic. It’s gentler than cleavers and is a common “volunteer” in gardens.  My garden at 8000’ was a bit too harsh for chickweed to take hold, but it did invite itself into the green house!  Like cleavers, chickweed is most effective as a fresh plant preparation.  It’s great topically and internally for skin issues and is used similarly as cleavers for upper body lymph system support.

Chickweed can be confused with the toxic scarlet pimpernel (Anagallis arvensis), which looks similar to chickweed when not blooming. Chickweed has white flowers, while scarlet pimpernel has reddish flowers (or blue, depending on where you live!).  When not blooming, a way to distinguish them is by gently pulling the stem apart…chickweed will have a white “elastic” band inside. Also, chickweed will have a single row of hairs along the stems.