Vedic Astrology For Sep 9-15: Jupiter, Venus & The Risk Of Overindulgence 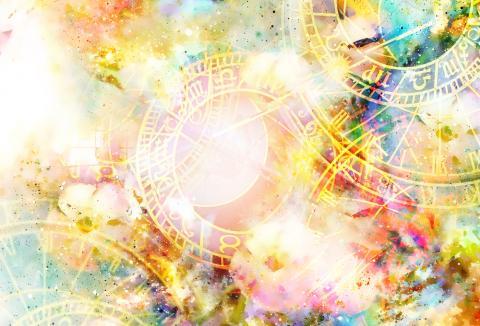 Planetary Transits & Cosmic Interplay for the week of Sep 9–15

With Labor Day just recently having passed, it’s quite fitting that we get the combination of Jupiter and Venus coming together into the sign of Scorpio.  This is because Venus and Jupiter’s combined energy is quite the antithesis of labor.  In fact, this combination is known for things just working out naturally without much effort and is actually known for overindulgence in one’s vices or in leisurely things.  Let’s explore why this is the case and what this transit can indicate in one’s life both externally and internally as well.

It seems like a lot of the conjunctions in the sky in the last few months have been made by what are known as the krura (Sanskrit word for cruel) planets (i.e., Sun, Mars, Saturn, Ketu, and Rahu).  These transits, while indicating stressful events, were at least somehow related to work and effort.  This is the nature of the cruel planets to create more work to give their rewards and typically bring about this in some sort of fashion that causes confusion, loss, separation, anxiety, fear, or a negative emotive experience.

Venus and Jupiter, on the other hand, are known as the two great benefic planets in Vedic Astrology as they typically indicate either more leisurely things or things working out with more grace, respectively.  An example of Venus’s energy is the comforts of life, like vehicles which ease one’s burden of travels in a multiplicity of ways.  With Jupiter, it’s about receiving more grace or luck in life to make things just naturally work out and come together.  It is said in Vedic Astrology that having Jupiter or Venus placed in an angle (meaning in the 1st, 4th, 7th, or 10th house) in one’s birth chart can go a long way towards mitigating undesirable effects and even towards making things work out smoother.

That is the essence of the gentle nature of these two great benefics in how they can make life easier.  However, there are some caveats when having them together in a sign.  This stems from the fact that in Vedic Astrology, Venus is an “enemy” to Jupiter.  This means that Venus’s energy will disrupt or hinder Jupiter’s natural agenda in what it is trying to produce.  An example of how this plays out is in overindulgence, laziness, and resting on one’s laurels.  Jupiter naturally represents one’s philosophy, so to speak, of how they view life and see things working out.  With Venus influencing Jupiter, one is more inclined to direct their life towards the easiest possible solution and to pursue only things that promote leisure.  They may not want to put their energy towards something that requires them to either get their hands dirty or that disrupts them from enjoyment.  Unfortunately, life requires us to have to work in some form or the other at times and this combination does nothing to promote one towards this end.

It’s only fair to look at the perspective of Venus being conjunct Jupiter.  In Vedic Astrology, it is known that Jupiter always helps out any planet that it is conjunct and is not an enemy to any planet and is the only planet that acts in this regard.  This means that Jupiter is always helping and in the case of being conjunct Venus then it will help Venus to produce its indications with more ease and in greater abundance.  In fact, abundance is the key word when defining Jupiter’s influence to any planet that it is conjunct.

Those are a couple of examples of the benefit of Jupiter’s influence to Venus.  Now, let’s also look at it from Jupiter’s perspective.  This is where we can see this being a period of becoming prone to overindulgence because one is suddenly not feeling like they want to do anything but enjoy life.  The key here is that life will be enjoyable!  But it can bring along with it the facet of overindulging where one has “too much fun” and lets other obligations, opportunities, and such go to waste because they might get pulled away from enjoyment.  This is definitely a time where substance abuse issues can come up, especially since it is happening in the sign of Scorpio which is a very mysterious and psychologically-centered sign that is related to escapism.  This can be not only substance abuse, but also overindulgence in sexuality can be indicated here as well.

With keeping the nature of Scorpio involved, it’s not all drugs and sex.  It can also be a time where one finds renewed interest in the occult and can make some serious headway in their spiritual life—however, not through doing spiritual work but simply by grace.  This spiritual progress can come spontaneously and result in huge breakthroughs that don’t exclusively come from something like years and years of meditation, but just naturally springs up.  Scorpio is a very inwardly looking sign that can result in transformation.  It is this spiritual metamorphosis that can occur during this time.

The key here at this time is to enjoy life for what it’s worth, but not to take things too far.  Time is a fleeting thing and the present should be enjoyed; however, the future and the gravity of one’s responsibilities and goals shouldn’t be left aside just for enjoyment’s sake.  Striking a balance between enjoyment and overindulgence is the issue at hand.  Comparing this to the previous months’ paradigm of stress and effort, it may seem like it is well deserved, but just be aware of its inherent pitfalls as well—even though they are so much more enjoyable!