Your Guide To Summer Flowers: Gladiolus 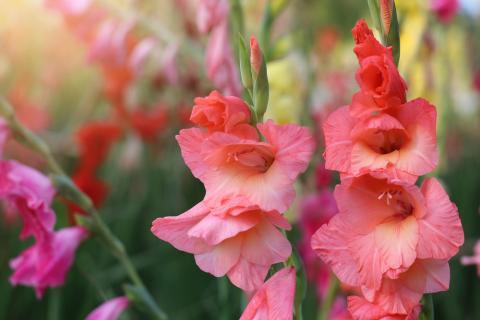 Gladiolus plants are a member of the family Iridaceae, commonly known as the Iris family. Its genus contains eleven species according to the United States Department of Agriculture but other professional horticulturists believe that there are many more species. The flower is native to South Africa and was a food staple for the native peoples. The plant was discovered by Europeans in the 17th century and brought to the Netherlands where it was cultivated and bred into large blossoms. The name was derived from the Latin word “gladius” meaning sword after the shape of the leaves and is also known as sword flowers or sword lilies. The gladiolus is the birth flower of those born in August; it is the fortieth wedding anniversary flower, and it symbolizes strength, mortal integrity, and sincerity. Gladiolus is the singular term for the plant and the plural is gladioli or gladioluses. They were considered the flower of the Gladiators because of their association to the sword.

Gladiolus blooms grow on a long spike-like stem that ranges from two to four feet in height. The flowers open from the lower portion, creating long spires of blossoms. Their leaves resemble grass as a blade of a sword and the flowers can be found in many colors that include bi-colors, oranges, reds, pastel blue, pinks, and yellows. Their spectacular hues combined with sturdy stems make them excellent cutting flowers for floral arrangements. They also make an attractive backdrop in flowerbeds. Gladioli flowers grow from two to eight inches in diameter and all of the blossoms open in one direction.

The Gladiolus flowers have been used in the Mediterranean region and in the British Isles as an herbal treatment and the roots were made into a poultice for removing splinters and thorns. The roots were also used to treat colic in infants by preparing a powder to mix with goat’s milk. Gladioli are used today by African herbalists as a powerful healing herb to treat colds and lower digestive tract diseases like diarrhea and dysentery. They are also used to relieve the symptoms of constipation and regulate bowel movements. In the Congo, the underground corm is boiled to remove the toxins and provides a staple form of carbohydrates.

Growing gladioli in the garden

Gladioli should be planted after the last frost and the soil has warmed and been prepared by tilling to a depth of twelve to fifteen inches and incorporating two to four inches of compost. The plant grows best in well-drained soil in full sunlight. For flowers that will be used for cutting in arrangements plant in rows to make it easier to tend and harvest. For decorative landscaping plant corms in groups of seven or more for the best effect and for larger blossoms be sure to plant corms that are one inch and a quarter in diameter. Set corms in holes that are approximately four inches deep spaced six to eight inches apart with the pointed end up. The flowers should bloom in about sixty days.

Gladioli do well in containers or pots as long as suitable drainage and growing conditions are provided. Plant corms in containers with drainage holes that are at least twelve inches deep and twelve inches in diameter. There should be gravel at the bottom of the container to insure proper drainage. The plants should be watered two to three time a week and cut off the dead heads to insure continuous flowering. When the plant begins to fail, empty the container and remove the bulbs, then clean them off and store them in a cool dry place to be used in the garden for the next season or place them in a new freshly prepared container.

Storing gladioli for the next season

Once the outdoor growing season is over, dig up the corms, then clean them and trim off the stem, leaving about an inch. When this is done leave them drying for about a week, then place them in a mess bag or nylon stockings to prevent moisture which can encourage mildew growth and place in a dry, dark, cool area. They will keep and be ready to plant in the spring.