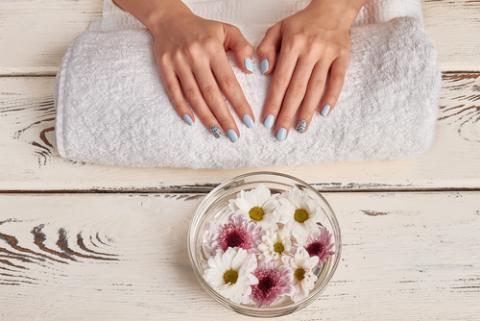 Are your fingernails brittle? Textured? Flecked with white spots?

According to Ayurveda, the fingernails are understood as the “bones’ waste product,” or Ashti Dhatu in Sanskrit. Formation of bone begins with consumption of nutrients, which build cells, which form the tissues that fabricate bones, muscles, and nerves, which make up organs, which comprise systems within the body. According to Ayurveda, the body expels in hair and fingernails those tissues unusable for bone formation. Based on this belief, the fingernails are therefore an indicator of what is occurring within the body and around the bone structure. Food becomes energy that enters the bloodstream, the bloodstream forms marrow within the bones, marrow solidifies to form bone, and so on. In the Ayurvedic practice, if the body is not fed with the proper body, mind, and soul “food,” it will manifest in one’s fingernail health.

Fingernail health often indicates derangement in the balance of the doshas: vata, kapha, pitta. Those with a predominantly vata constitution tend to have fingernails that are brittle, dry, crooked, and rough. Those with a predominantly pitta constitution have fingernails that are soft, pink, tender, and pliable, and have a bit of a sheen to them. Those with a predominantly kapha constitution have fingernails that are thick and durable, and also soft in texture with a uniform shape. Large moons—lunula—present at the base of the nail bed indicate healthy circulation and pranic (energy) flow as dictated by the internal (digestive) fire, agni. The absence of lunula indicates the opposite: compromised digestion related to poor metabolism and the potential buildup of toxins in the system.

To support healthy nail growth and development (in addition to overall health!), one should incorporate the following into the diet:

Examine your own fingernail health and what it may reflect about your health. If you are increasingly concerned about any of these causes, do consult your primary care physician or other expert for further guidance regarding how to manage your health.

Either chronic or acute, nail biting is a sign of excessive anxiety, worry, or fear.

Fingernails with a blue-purple hue to them indicate a lack of oxygen in the body system, which has the potential to cause hypoxia or cyanosis (oxygen-deficient tissues). This suggests derangement of vata, which is constituted of air and ether. Bluish purple fingernails may also signal the presence of a pulmonary infection such as chronic bronchitis, or existence of conditions like asthma or emphysema.

Though uncommon, fingernails that appear to overtake the tip of the finger to resemble the form of a club indicate a frail heart and lungs. Related to poor circulation of prana, the life force, clubbed nails are a sign that body tissues are lacking oxygen. Reestablish balance to vata by incorporating a balancing practice such as pranayama or yoga into your daily routine and engaging in soothing activities such as self-massage or enjoying a warm cup of ginger tea.

Fingernails that grow to look like a parrot beak in form, with a hooked, pointy tip indicate the potential presence of a chronic cough. Similarly, a bump at the end of the fingernail also signals derangement of kapha, indicating the possible presence of a chronic lung infection. Embodying the qualities of water and earth, kapha imbalance may be restored by maintaining an active lifestyle and following a regular, invigorating routine.

Horizontal lines, waves, or steps in the fingernails indicate malnutrition. This texture on the fingernail suggests that (pitta) agni, or digestive fire, is deranged and not firing appropriately. One consistent transverse groove in the nail indicates that there was an especially impacting illness, infection, or depletion at the time the nail was developing.

A red, enflamed nail fold is a sign that infection or parasites may be present in the body. The most common reason for a red, puffy nail fold is related to poor hygiene or an encounter with microbes of some sort. This may happen while gardening, for example. Reestablish balance to pitta by incorporating cleansing and healing herbs into the diet.

Pitting of the Nails

Pitting of the fingernails, which looks like small holes in the nail, indicate inflammatory skin disorders such as eczema or psoriasis, or connective tissue disorders such as alopecia or lupus. Pitting may also be a sign that one is at greater risk for these types of skin disorders, which are generally associated with increased or aggravated pitta (heat) within the body system. Incorporate cooling and soothing flavors, colors, and activities into daily practice and avoid skipping meals and hot, sour, or bitter flavors.

Combination of Doshas in Nails

Longitudinal lines or striations in the fingernails indicate malabsorption of nutrients within the body. The more prominent or deep the lines appear, the more severe the deficiency. This texture suggests vata derangement primarily, although derangement, inflammation, or toxins in the general gastrointestinal tract may mean that pitta or kapha is upset.

White spots are not generally severe, and can ideally be solved with a diet or lifestyle change. Taking a multivitamin to ensure that the body is receiving the nutrients it needs may also be a solution, but always consult your doctor before self-medicating for this; it may simply be aesthetic, from stress or trauma to the nail.

Yellowish fingernails indicate the likely presence of a fungal infection. A fungal infection may affect one nail or many, and can become more common during old age. Yellow nails may be a result of genetic predispositions to liver disorders or tuberculosis, or an indicator of weakened immunity, lung infection, toxins in the body, or side effects from medication. Overuse of nail polish is an example of toxins entering the body and may result in yellowish coloration of the nails, as well.

Pale nails are an indication of diminished red blood cells in the body system, or anemia. This can be caused by an iron, folate, or vitamin B12 deficiency, excessive bleeding from menstruation of an injury, chronic diseases, or other autoimmune conditions. Spoon nails (Koilonychia) that appear concave in the center of the nail may result in extreme cases, so it is best to address especially pale nails at first signs.