Mantras That Matter: Using Ganesha Mantra To Open The Way 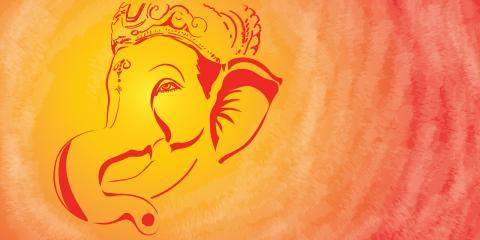 Mantra work has been some of the most powerful work I have done in my lifetime. The effect mantra has on the cells of the body and the DNA is so pronounced that I can literally feel the shifts in my being after I chant. The resonant tones of chanting change the physical body forever. It is inescapable and undeniable: Chanting simply transforms you!

Ganesha is the archetypical essence within the self of the ability to dissolve obstacles, as well as the innate capacity we have to tune into wisdom and download it into our consciousness. By chanting Ganesha mantras we are basically using spiritual technology for change. Let’s see how it is done.

Step 1: Create the Intention for Mantra Use

Before getting started with the chanting of any mantra, it is a good idea to intend vocally (or at least mentally to yourself) the reason why you are choosing to chant. In this way, the body and mind are prepared to put to the best use possible the tones and vibrations which will shortly occur.

Think of it like creating a new folder on your desktop in which you are going to compile a group of specific images. First you name the file, and then the items which resonate with your intention align with the chosen folder more easily.

How the Mind Works with Intention

The mind and body like to know which direction to take things. If we have the habit of talking down about our bodies, then the mind creates the equivalence of a folder in the brain to file and store all the negative body-talk we engage in and hear. That way, whenever we hear resonant thoughts, ideas, advertising, etc., we automatically “add them to the folder” and thereby increase our resonance with the intention we have placed—in this case, of thinking poorly about the body. If we follow this track very long we end up acting out the contents of our folder and attracting experiences to back up our compilation, as well as beginning to store such thoughts in our “core belief folder”—which becomes the fundamental operating system we run off of.

Mantras are powerful tools for overriding current self and life-sabotaging folders in our brain and core-belief program. Rather than needing to fully identify the core belief or the negative pattern, we can simply look to incorporate empowering mantras into our lives in order to add what you could call “high frequency affirmations” to our body field. Mantras bring in a frequency that is of such precision and high vibration that it naturally corrects and overrides negative self-talk and is evolutionary to our system.

The Intention of a Ganesha Mantra

Ganesha is depicted as the elephant, the totem which represents wisdom and remembrance. What a beautiful inspirational image when choosing to work on oneself, especially in the spiritual sense. When you have become familiar with the significance of elephants (maybe as a totem animal) or of Ganesha in one of his known roles (such as removing obstacles, assisting the root chakra, or acting as a scribe for writing or other inspiration), then using a Ganesha mantra for the purpose of invoking any of these things suddenly becomes incredibly valuable.

There are a variety of Ganesha mantras that I like to use and which one I pick usually is based on which one sounds coolest to me at the moment. You can choose in an equal manner, or perhaps you will just feel drawn to one form or another. Here are some of my favorites, which all mean about the same—they all invoke Ganesha into your field and body.

In this version of a Ganesha mantra you are using the Bija or seed mantra of “Gum.” Seed mantras work directly on vibrating the petals of the chakras—and in this case, the first chakra directly. Ganesha mantras are effective in opening our root so that we can experience the abundance that is ours, despite where we might feel blocked.

The Ganesha Gayatri Mantra is one of the many variations of the very popular Gayatri mantra. In this particular rendition, Ganesha is acknowledged for having only one tusk, which was a result of his very humble, modest behavior of “not fighting back” as displayed in one of the many stories of Ganesha. By chanting this Ganesha mantra we are asking for increased humility and wisdom based on righteousness. There is also reference to his “omnipresence” which is a call to invoke one’s own super-human abilities.

Using one of Ganesha’s other names, Ganadhyakhsay, which means “leader of a group,” this mantra is often used to bless or protect cities, towns, countries, or other groups of people. This would be an excellent mantra to use in the United States right now, or to remove obstacles for certain specific groups of people who are marginalized or treated without equality.

Ganesha goes by the name Lambodar here, which is referencing his belly and his delight of food. This mantra is specifically helpful for someone who judges their body, especially in relation to food or eating habits. The chanting of this mantra can help one come into a space of self-acceptance and love around the body and the way one chooses to eat. In this way, the body and mind transform and the person begins to live in a place of self-love rather than disdain. This is a very powerful mantra.

By accepting ourselves and loving ourselves as we are, we are also choosing to embrace the entire universe as it is, as well as our place in it. For truly, we ARE the universe and the universe lives in us. In this mantra we agree with Oneness and our individual manifestation of it.

Something to Be Said for Ignorance

As a final note, there is something to be said for not knowing the purpose of a specific mantra, but using it anyway. The logical mind likes to try and talk us out of the power and potency of mantras or anything else which works using the more intuitive or feminine channels. The coolest thing about mantras is that they work regardless if you know the meaning behind them or not. In fact, for some of us they might work better if we don’t know with the mind—and just chant them.

The special intonations of mantras act on the chakras and nadis of the body in order to open energy centers and send specific vibrational patterns throughout the system. In this way, the old programs of defeat and dis-ease are overridden and replaced with healing and empowering vibrations which change our lives.

How Many & For How Long

No matter which Ganesha mantra you choose, it is advised that you use it often for 40 days in order to see maximum results, though I often notice big changes after only a few days to one week. Generally, chanting 108 of the chosen mantra in any sitting is preferred and recommended as it is the magical alchemical number of change. If 108 sounds like too many to begin with, you can do a quarter or half of 108 to begin with and increase as you feel the potency build. The most important things are dedication to your practice and enjoyment doing it!

So go ahead, remove obstacles and access the wisdom of the universe which is rightfully yours!