Superfoods 101: The Health Benefits Of Cardoons 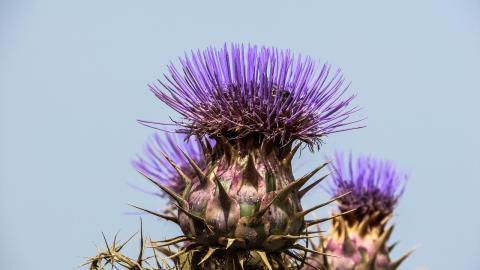 Cardoons are a member of the family Asteraceae, commonly known as the Aster family of the genus Cynara L. or Cynara P. This genus contains two species: cardoons, or Cynara cardunculus L. whose common name is cardoon, and the globe artichoke. They are native to the Mediterranean region, have been cultivated since the Greek and Roman eras, and were documented by the Greek writer Theophrastus in the 4th century B.C.E. It implied that the origin of the plant was located in Sicily but it is thought that it came to Sicily by way of North Africa. It became a popular food throughout Europe in the 18th and 19th centuries and was brought to America by Italian immigrants. The nomenclature cardoon is derived from the Latin word “cardo,” meaning “big thistle.” The Conquistadors brought the plant to the New World; Charles Darwin wrote about his discovery of cardoons in Argentina on September 19, 1832, as he rode past a large field of cardoons growing wild on the pampas, as tall as the back of a horse and covering hundreds of miles.

Cardoons are an edible thistle that has a celery-like appearance, having a silver-grey stalk with medium sized flowers that are like a combination of a globe artichoke and a common thistle. The leaves have a fuzzy, thorny texture with heavy midribs; the flowering heads, the stems, and the large veins of the main leaves were used in recipes. They were often eaten raw at the end of the meal but in modern times are often eaten as an appetizer. The immature buds are pickled in vinegar or brine with seasoning. They are closely related to the globe artichoke and can be prepared much the same way, steamed and in salads.

1. Cardoons are a nutrient-rich vegetable. They contain protein, fiber, carbohydrates, calcium, potassium, and vitamins C, B5, also known as pantothenic acid, and B9 or folic acid. Cardoons also contain iron, contributing to the health benefits of the vegetable.

2. Adding cardoons to the diet prevents many health problems and maintains a balance in the body. Cardoons can prevent insomnia because they contain magnesium which relaxes and calms the brain. It is also a factor in balancing the neurotransmitters throughout the body, resulting in the relief of headaches.

3. Other health benefits of cardoons are the enhancement of growth and body development. Containing iron, cardoons promote mental function, normal motor skills, and the implementation of new information. Their high content of calcium reduces the risk of colon and rectal cancer. The potassium found in cardoons aids in the digestive process, reducing the incidence of constipation and contributing to a normal kidney function, lessening the risk of kidney problems.

4. Knowing the proper way to select, prepare, and store cardoons is important for a delicious result. The ideal cardoon has a gray-green hue with heavy moist stalks that are not crisp like celery. The leaves should be soft and the color should be gray-green, much like the stalk. The stalks should be thoroughly rinsed and the veins or string removed from the larger stalks. The ends should be cut and the small leaves removed. They can be stored from five to seven days in the crisper section of the refrigerator and it is recommended to cut the stalks in half and wrap them in plastic before storing.

5. Cardoons can easily be added to a backyard garden. They can be started from seed indoors about six weeks before transplanting after the last frost. The young leafy stalks will be ready to harvest from 120 to 150 days after planting. The plant likes full sunlight, rich organic soil, and prefers to be dry before each watering.