Your Guide To Summer Flowers: Forget-Me-Nots 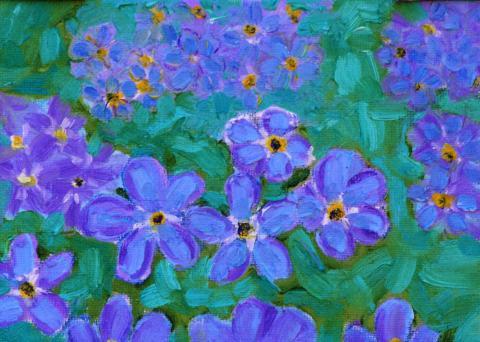 Forget-me-nots are in the genus Myosotis which includes approximately fifty species. Some have been introduced to North America and some are native to the continent. There are also species that are native to New Zealand but have been introduced in other parts of the world. It is primarily an annual and has been romanticized in poetry and Christianity. King Henry IV of England adapted his coat of arms with the flower in 1398. The 19th-century Scottish poet William McGonagall wrote a poem with the title of the flower telling of the love a knight felt for his betrothed. There were several English superstitions regarding the flower: it was said the wearing the flower in the month of May warded off witches, for example. They also believed that the juice of the forget-me-not sharpened steel and it was a favorite flower to give to people embarking on a voyage.

For-get-me-nots are small, delicate flowers with light blue, pink or white petals having a yellow center; depending on the species they can be either annuals or perennials. Its genus name is derived from the Greek word meaning “a mouse’s ear” because of the appearance of the leaves. The common name is said to have come about when a medieval knight and his lady love were walking along the Danube River; she saw a little flower floating at the shore and when the knight fell into the river the current was too strong, and as he was swept away he threw the flower to the lady and shouted, “Vergiss mein nicht,” the English translation “forget me not.”

The plant grows to approximately two feet in height with hairy stems and has a five-petal flower. It blooms from May to October and grows in moist areas, usually along riverbanks, brooks or other bodies of water. Perennials are usually the wild species and grow in shady damp areas, as well as in full sunlight. These little flowers may not be advantageous for a bouquet but they are a good landscape addition. They have many interesting uses and are a versatile addition to any garden.

The true forget-me-nots, Myosotis scorpioides and Myosotis palustrus, are native to North America. Growing conditions for these plants are simple: moist soil. They can grow in both damp woody areas, bogs and around ponds, but also thrive in full sunlight.

Planting forget-me-nots requires soil mixed with compost, and they should be seeded in the early spring. Fertilize plants in spring and autumn. Spacing is not important because they readily grow in bunches. Blooms that are fading should be removed or they will seed and take over the garden. Take out the plants in the late summer as they die out.

The United States Department of Agriculture has designated these plants for zones three to eight and some up to ten, depending on the species. They can grow quickly and can be an invasive species in some areas.

Care of forget-me-nots in the garden consists of pruning to be sure they do not overtake the garden or interfere with the landscape design. They need to be watered in dry areas and grown in areas where other flowers cannot take root.

Not only is the plant an attractive addition to the garden, it is edible and can be used as a decorative ingredient in salads, in small quantities. The plant is an astringent and is used in holistic healing as a cure for several eye conditions, like conjunctivitis. As a powder, it is effective in controlling bleeding. Forget-me-nots are also used to heal and maintain the health of the respiratory system, the kidneys, and the stomach. They are also effective in stopping nosebleeds.

The flow of the garden is enhanced with a variety of colors, textures and physical attributes which adds to the enjoyment of gardening. Choosing the right plants for a particular landscape project is important, so planting forget-me-nots in a flower bed that does not require much watering would not work well. Adding these delicate flowers to your garden not only adds an aesthetic quality; they can be used for healing purposes and as garnishes in recipes.