Your Guide To Backyard Weeds: Purslane 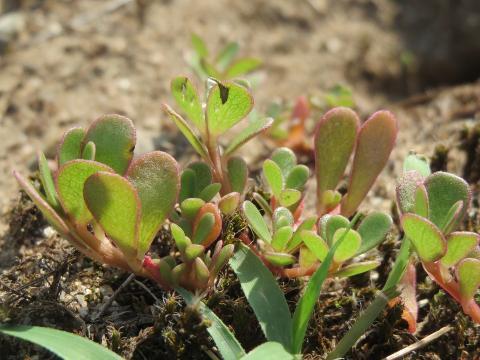 I first discovered purslane while pulling weeds from my garden. The plant was succulent-like, with thick padded leaves, brightly colored red stems, and tiny yellow flowers. I inspected it closer. It looked like a vegetable I had seen sold at the farmer’s market and so, with a few stems in hand, I went to my computer to investigate.

It turns out that this “weed” was actually a superfood. Purslane is a hardy vegetable that often springs up in driveways, garden beds, and along sidewalks across the country, but the humble vegetable provides quite the nutrition punch. Native to Persia, India, and Northern Africa, purslane is still widely used in Eastern Mediterranean cuisine, but is generally disregarded and considered a weed here in North America. While purslane has a pleasant salty, sour taste (have you tried sea asparagus? It tastes somewhat similar) it’s also mucilaginous, meaning that, when cooked, it becomes thick and somewhat goopy. Not convinced on giving it a try? Here are five reasons you should be thankful if you have some purslane growing in your backyard.

Omega-3 fatty acids are vital for reducing inflammation, and may help lower the risk of heart disease, cancer, and arthritis. A study published in 1992 confirmed the nutrient density of purslane, comparing chamber-grown (cultivated) purslane to its wild counterparts. Surprisingly, chamber-grown purslane contained higher levels of omega-3 fatty acids, but that’s not to say that you’re missing out by eating the plants you find outdoors.

The Scientific World Journal published a study titled “Purslane Weed (Portulaca oleracea): A Prospective Plant Source of Nutrition, Omega-3 Fatty Acid, and Antioxidant Attributes” that demonstrates the high levels of nutrition in the common weed. Among the benefits touted is the fact that purslane contains the highest content of vitamin A among green leafy vegetables. Vitamin C and B-complex–including riboflavin, niacin, and pyridoxine -- can also be found in purslane.

Phenols, or phenolics, are compounds with one or more hydroxyl group produced by plants. These are generally produced to fight against stress. Wild plants, like purslane, contain high levels of phenols, which also aid to increase antioxidant capacity. Antioxidants, in turn, help protect the body from free radicals, thereby reducing the likelihood of cancer and other diseases.

Kale has been all the rage for several years now, but at $2 to $3 per head in some cities across the nation, it’s an expensive fad. Purslane, on the other hand, rivals kale in its nutritional profile and can be found on sidewalks, driveway cracks, overgrown vegetable gardens, and even next to highways (though we don’t recommend you eat that kind.) Looking to incorporate more fresh, leafy greens into your weekday dinners? Purslane is an easy way to do so. Eaten raw, it tastes like tangy, lemon-flavored cucumber; cooked, it’s mild, if somewhat stringy, and can be used in stir-fry and other quickly heated methods. In most cases, weeds are far more nutritious than their cultivated counterparts.

Gathering food is natural to the human species and has been done for thousands upon thousands of years. Finding and harvesting your own food is satisfying in a way that purchasing your vegetables–even if they’re local and organic–can’t rival. Make it active by biking or walking to a location where you’ve seen the weed. Not sure what it looks like? This guide will help you safely identify purslane.

So you’ve collected purslane. Now what? Here’s a simple salad recipe that I love to make in the summer.

Deseed and chop your tomato, pepper, and cucumber. Finely chop your sweet onion. Thoroughly rinse your purslane and dry. Roughly chop. Combine all ingredients and drizzle with olive oil, lemon juice, and salt to taste. Add finely chopped cilantro or basil, depending on your taste. Serve fresh.