A Writer's Day: What I Eat For Dinner 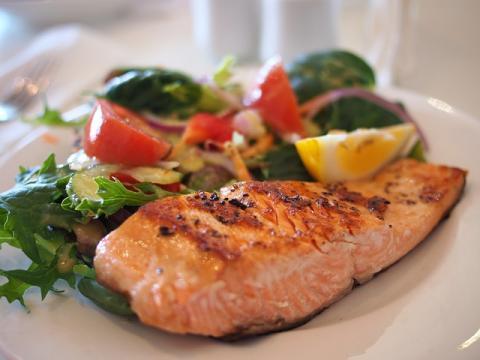 Does one ever enjoy a supper that is so healthy, he or she temporarily feels that all is right not only in the larger world schematics (however heavily floating the dinner is in suspended disbelief), but that everything is copacetic within the integral subset of one’s own body? The other night, I ingested such a nutritious, tastily-fortified dinner— And, you may also partake:

First, for five to seven minutes or so, I oven-baked 4 ounces of Alaskan sockeye salmon in olive oil. Most significantly, salmon contains Omega-3 fatty acids that the Journal of Integrative Medicine has concluded increase lifespans by an average of 2.2 years and decrease cardiovascular disease by 35%.
Wild salmon does not contain the pesticides and unhealthy breeding practices that are often prevalent in farm-raised operations. Also, in Alaska, because the fish’s lifespan is only three years and it doesn’t prey on many contaminated fish, poisonous mercury levels are currently tolerable, especially when taken with a metal-absorption anecdote to aid digestion.

Nevertheless, the salmon was merely the entrée! Next, I enjoyed a hearty, organic kale salad with organic carrots, organic Crimini mushrooms, and onions.

Kale is an anti-inflammatory that removes and expels toxins. The cruciferous vegetable is rich in Vitamins C and A— two of the top three antioxidants in the world that obviate destruction from free radicals. Because kale has inherent antioxidant and anti-inflammatory qualities, it is a boon for the heart. The ruffled greens lower bad cholesterol and increase healthy cholesterol by 27%. The glucosinolates embedded within kale protect people from cancer in the crunchy chewing and further, digestion process. How may so many potent vitamins and minerals (K, A, C, Potassium, Iron, Calcium, Protein, Fiber, etc.…) within one superfood form a green powerhouse of edible aid to consumers, thereby delaying ultimate distress?!

Carrots are not only wonderful for rabbits whose first name happens to be “Bugs!” In one study, rats who ate carrots had one third less cancer than the rest of the pack. This is due to the high beta-carotene nutrient that serves as an antioxidant and slows down the aging process.

If folks could eat this healthily and deliciously every night, why would there ever be the need to indulge in crappy substitutes? Diabetes, heart problems, and cancers might drastically decrease. I believe that people often make the catastrophic mistake of thinking that just because a foodstuff tastes good or because it leaps quickly from a restaurant’s coffers into the mouth that it is good enough for one’s consumption. Let me leave you with two intertwined questions to ponder: “Who is consuming who?” Or, in the alternative, “What is consuming what?”