Yoga for the Eyes 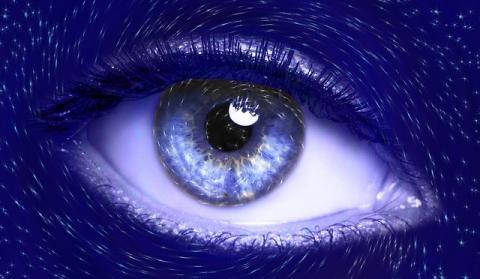 My mother wore hard contact lenses for over 30 years. After working with Yoga for the Eyes for several months she began to see a marked improvement in her vision and after six month's time, she didn't need the contacts anymore. Now she only uses reading glasses on the occasion that she is staring at pages for extended periods of time. I was astonished to realize that Yoga for the Eyes was so powerful and so quick in its results.

The gift of sight is most precious and affords us the opportunity to see life from a myriad of vantage points, a multitude of colors, textures and shapes and to interpret reality anew – every moment of every day for our entire lives. The eyes are tools of consciousness, as they both assist us in connecting with the world as well as helping us to close it out (by lowering the eyelids) so we might find wisdom in the darkness behind closed eyes. Yoga for the Eyes is a simple but powerful practice that allows one to keep the eyes physically strong and ageless as well as helping one to develop deeper vision beyond the third-dimensional interface with the outside world.

Too often we spend the majority of our days and nights looking straight ahead, interacting with screens and those in our immediate sight. Unfortunately, since the eyes are designed to be more broad-reaching in their visionary capacities, such a limited perspective of life can let the muscles of the eyes weaken, leading to poor vision and eye problems later in life.

Yoga for the Eyes asks the practitioner to use the entire scope of the musculature of the eyes. By stretching the eyes in all directions and alternating such movements with bringing the gaze back to center, visual abilities and possibilities are both strengthened and healed.

How You Do it:

Start by gazing straight ahead, focusing on something out in front of you, at a distance of about 10-15 feet away. Next, move the gaze to something near the body, within a foot or so. Repeat this “near and far” gazing practice for several moments to practice the focusing skill needed to both read and interpret distant signs and symbols. If possible, move the gaze next to something very far away, and then to something extremely close (beyond 10 feet and then within a few inches or less). In this way, the near/far mechanisms are strengthened even more.

If you spend a great deal of time in front of the computer screen this practice is particularly useful and important so as to stretch the eyes, which strain to see close-up, to also see that which is the opposite – far away. The following practices can be incorporated into a simple 2-3 minute regimen as well, breaking up screen time for a simple “work-out” for the eyes several times per day.

The second phase of Yoga for the Eyes consists of bringing your gaze to a center point – usually right out in front of you at a few feet distance, where you normally meet another person - and then moving the eyes (without moving the head) to look at something in the far top right corner of the room or space. In this way the eyes are stretched to the maximum. After gazing to the far top corner, move the gaze back to center. Now shift the gaze to the far left top corner, returning back to center afterwards. Next shift to the bottom right corner, then center, the bottom left corner, then center, and now as far to the right as possible, followed by a far to the left gaze. Always come back to center between each stretch.

The practice of finding each corner with the vision should be repeated several times in a row to fill several minutes. In this way, muscles that have not been used for some time will be stretched, and it is not uncommon to feel a bit of ache or tenderness behind the eyes following this practice after the first several times practicing, due to a lack of using the muscles. If muscles are sore it is great confirmation that the practice is even more crucial to your overall eye health, as tired eye muscles lead to later vision problems.

After reaching for the corners of the eyes, the next part of the practice is to look to the far left, back to center, the far right, back to center and then repeat. Next, take the vision to the top center of the eyes and then back to center, and then to the bottom center – without moving the head. Always bring the gaze to center in between each stretch. Repeat several rounds. Again, the sensation of any soreness will signal the necessity of repeating this practice as often as possible.

The next part of the practice is to take the eye gaze in a circular motion, starting in the clock-wise direction and following the gaze all the way around in a circle. Take note where the eyes tend to “skip” segments in this practice. This will inform you where your vision is most compromised and where concentration may be required during subsequent rounds. After moving clock-wise, now move the eyes in a counter-clockwise rotation. Notice, as before, where the circle is non-fluid. These “skipping” segments are also signaling muscle memories that need clearing in the body/mind. Often the eyes will hold onto painful or traumatic occurrences – including birth traumas –  that compromise our vision and later lead to eye issues.

The final piece of this Yoga segment is to move the eyes in a figure eight motion. Do this in both directions for several rounds each.

Finishing up the Practice

These phases may be mixed up, used in different orders and lengthened or shortened each time to vary the practice and add variety to your eye workout.  By practicing Yoga for the  Eyes on a regular basis you will find compromised vision returning, tired eyes strengthening and any eye problems starting to correct themselves.