Tai Chi: Slow Time and Connect To The Natural 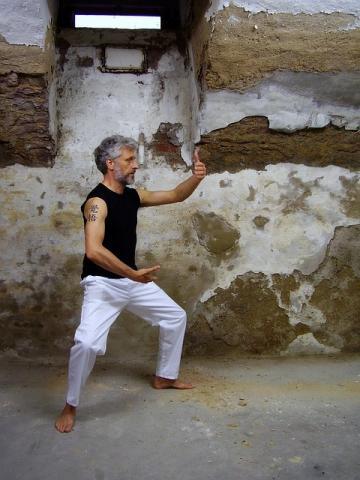 On a train ride from Bombay, India, to Goa, I sat in a car with a man in Bermuda shorts and white wild hair talking endlessly for the entire 12-hour journey of his experiences all across India: as a monk, in the Tantric temples, as a martial artist learning from the best. I had no idea I was cosmically being set up with him as my teacher for the next several months. He was a Tai Chi master and I was one of the lucky students to meet Sahm.

I had set myself up to spend six months on the beaches of Goa to soak in the beauty of the country and enjoy the beaches I had only glimpsed during the final few weeks of my previous stay.  Suddenly, on the first day of my landing, I was equipped with a Tai Chi master who also taught ecstatic yoga on alternating mornings six days per week. The two practices complement each other amazingly.... for as the energy rises for direction in ecstatic yoga, it is then allowed to center-in and inhabit the body in a steady manner with the movements of Tai Chi.

In China, Tai Chi is used as a daily health practice to help alleviate pains and prolong life. It is said to be good for the heart, to lower blood pressure, reduce stress and keep the immune system strong. As I raised my arms forward, shoulder-width apart for the first stance, legs separated and knees slightly bent, I found myself challenged by the way I was asked to move so fluidly. It was in those first moments of introduction to this ancient art that I realized the problem so many of us have in the west. We are too stiff. We move too mechanically and our lives are so much tethered to machines and technology that it is difficult for us to move like the trees in the wind.

Tai Chi helps one to reconnect with the natural elements, to find the interconnectedness one innately has with life, with nature, and with the ground beneath our feet. To be able to move as with the wind and yet stay, at the same time, rooted as the great oak, to breathe with the rise of the ocean, and feel light as the clouds -- these actions bring one into intimate knowledge with the wisdom of life. There are few practices that are so liberating to the body, mind and spirit. One is able to find both peace and strength simultaneously within the fluid, rooted movements of Tai Chi.

There is a silent wisdom in nature that is just waiting for us to tap.

As I began to find myself remembering the steps I was being taught, and moving in rhythm, I sensed an inner power start to flow within me which was known to me in yoga as prana. It propelled me deeper into the stillness I was cultivating in the mindful pivots and sweeping motions of Tai Chi. The more I dropped into it, the easier it was to slow down, to “cover space” without any thought of success or specific gestures. Instead, the movements seemed to arise as if from within me, as though they were already a part of me and I was remembering them.

In China and Thailand, as well as other Asian countries, you can find hundreds of people practicing Tai Chi in parks at dawn daily. All the participants move together as if they were one body, one ocean of consciousness. In practicing with others in such a large group, I believe Oneness-consciousness is more easily remembered. It is the opportunity to feel oneself as part of the greater whole in such a simple, yet very grounded way. For in truth, are we not One body of consciousness manifested as a multitude of forms?

Tai Chi movements work as powerful rehabilitators of motion. Not only to the physical demands of the body which ask for equal balance and flexibility, but with the ability to shift and flow with the energies of life itself. Studies show that Tai Chi improves one's self-confidence and sense of self; it aids in cardiovascular health and improves the ability to stay flexible and healthy as one gets “older.”

The time spent practicing the beautiful sweeping movements of Tai Chi on the beaches of the Arabian Sea are some of the finest and most peaceful, grounded memories of my life. It is there that my body and soul remembered how to live what some might call a “magical” existence. For in the arms of the ocean of energy that the body learns to dance with in Tai Chi, the truth about what it means to be healthy and vibrant and alive comes to be known so deeply that no words could explain.

Some call Tai Chi “meditation in motion” and surely and certainly it is that. Through practicing the movements in this sacred art one can learn to become ever mindful of every move the body makes while turning one's entire life into a sacred communion with the Divine.

Though I spent only three months on the beach practicing Tai Chi, it felt like three years, so long were the days and nights. It felt as though time had stretched out so as to allow me to take in the magic and mystery being revealed to me – a little more -- through the gorgeous art of Tai Chi. I felt more connected to the tides, to the moon, to the sun. All of nature opened up to me and I found myself reading from the records of life through my bare feet against the hot sand and the cool evening shade. I do believe that Tai Chi opened up the world to me as I had never before, nor rarely again, been privileged to experience. Even still, I keep it with me, in the still center.