Your Guide To Summer Flowers: The Rose Family 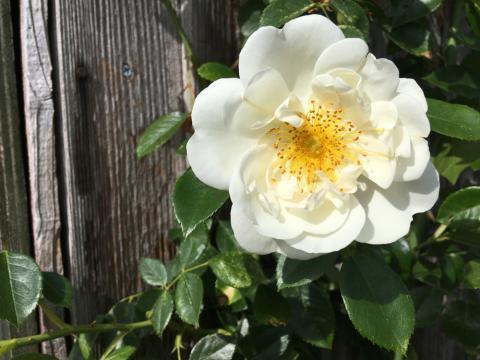 According to the United States Department of Agriculture (USDA) the Rose family or Family Rosaceae has 582 genera offering a multitude of flowers with various characteristics to add depth and interest in any garden. Of the contents of the genus Rose L. this article will discuss several of the many species it contains. Many of these plants can be grown in containers, providing floral décor throughout the year. In the garden they can be combined with other flowers to add variation to the landscape. Roses are edible plants found in many recipes and most have been used for centuries as healing herbs.

Carolina Rose (Rosa carolina L.) produces leaflets of four to six inches in length and two to three inches in width on upright stems that have thorns. The shrub grows in thickets from eighteen to forty inches in height. It produces blooms that have five light, pink petals with a bright yellow center and range in size from two to three inches in diameter. It is a drought-tolerant plant that does well in full sunlight or partial shade and well-draining soil. It is a nice addition to a butterfly garden. The hips are edible but need to be carefully cleaned of the irritating hair.

The White Rose of York (Rosa ×alba L. (pro sp.) [arvensis × gallica]) is a very fragrant flowering shrub that will reach a height of five to eight feet and spread from three to five feet at maturity in about two to five years. It is used in informal gardens as a border or hedge. The plant bears flowers made up of five petals that evolve into red or purple fruit that is aesthetically pleasing. Its grey-green foliage makes a good background for its flowers and fruit. The White Rose of York can be used as cut flowers in floral arrangements, as a container plant, or dried for potpourri.

Rose Meadowsweet (Spiraea splendens Baumann ex K. Koch) is primarily native to lower western Canada and western United States but has its origins in other regions of the world. The plant is used as a medicinal herb with anti-inflammatory properties, as an antioxidant, and as an analgesic. Rose meadowsweet is used to relieve pain and contain flavonoids and tannins that promote health. Its healing properties can be used both internally as a tea and topically as a tincture. The plant can be found growing along creek beds and roadsides and enjoys humid climate and rich soil. It grows from rhizomes that produce angular stems with pink or cream blooms and fuzzy leaves that grow dense at the bottom of the plant. The flowers, leaves, and roots are edible and can be used in many recipes.

California Wild Rose (Rosa californica Cham. & Schltdl.) is native to Oregon and California. The plant can be found along the Pacific coastal areas in partial shade and full sunlight and high elevations at approximately 6000 feet. It grows upright to a height of three to six feet, producing clusters of pink blooms that mature to one to two inches and grow from the end of the stems. The hips of the flowers are rich in vitamin C, calcium, phosphorus, and iron and were used in England during WWII for their rich nutritional value. The leaves were steeped in tea to treat pain and colic and the roots were used as a cold remedy. As a food staple the flowers have been used in many recipes, such as, butter, candy, jelly, and tea. The buds were an ingredient in salads and the blooms were soaked in water as a drink. The stems were made into arrows and the bark was used for making twine.

Bristly Nootka Rose (Rosa nutkana C. Presl) is native to Manitoba, Canada, and western United States (except for California and Arizona). Its name was derived from the Native People who lived on the west coast of Vancouver Island, British Columbia, Canada, along the shores of Nootka Sound; other nomenclatures include common rose, wild rose, or bristly rose. The plant matures from two to nine feet with large pink flowers that bloom at the end of the stems. The leaves produce seven-toothed leaflets that tend to be round at the tip. The fruit is large and can be from one-third to three-quarters of an inch with red-purple hips. It is a barrier thicket essential to stabilizing the banks of stream. The plant blooms from May to July and bears fruit that ripens in early fall and stays through the winter months. The hips are rich in vitamins A, C, and E and were used to make jellies and jams; they were also eaten raw or dried. Roots of the plant were used as an eye wash and to treat sore throats. The bark was made into tea and used to ease the pain of women in labor.

These plants make an interesting addition to any garden and have many healing qualities and add a unique flavor to recipes.