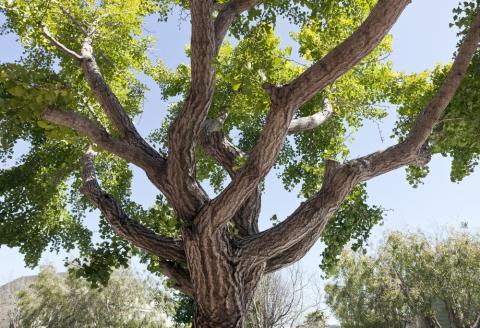 My neighbors have two beautiful ginkgo (Ginkgo biloba) trees in their front yard.  Honestly, I didn’t really notice them until our first fall living here, when suddenly the trees and ground were covered in gorgeous golden leaves that seemed to glow in the autumn sunlight.  I quickly looked into these stunning trees to learn more about them.

Turns out, I’m not the first person to notice their beauty.  Ginkgo trees (also known as maidenhair trees) have been grown around Buddhist temple gardens for centuries, and it’s not unheard of for some temples to feature ginkgo trees that are a thousand years old.  They’re native to China, but this deciduous conifer is capable of being grown in many different regions.  In fact, fossil records show that the tree was widespread over the globe 150 million years ago!  Their fan-shaped leaves turn a beautiful bright yellow in the fall, and they seem to all fall from the tree at the same time, creating a soft yellow carpet at your feet.  They had a striking contrast to other leaves that turn red or orange in the fall, and can reach tall heights, providing even more visual interest.

Like some other trees, ginkgo trees can be male or female.  You’ll know if you have a female gingko tree because their seeds tend to stink (really bad)!  However, if you’re germinating ginkgo from a seed, you might not know the gender for up to 30 years, since that’s how long it takes a tree to mature.  (Often ginkgos for sale are cuttings from male trees to avoid this predicament.)

You can choose from different varieties—ones like Autumn Gold can reach 30-50 feet tall while Gold Spire or Jade Butterflies are better choices for smaller spaces, as they’ll only reach 12-15 feet tall.  Looking for something for your container garden?  You can choose a dwarf species, like Troll, or even train a ginkgo as a bonsai tree!

How To Grow Ginkgo Trees

These deciduous conifer trees like sunshine and can grow almost anywhere (they don’t do so well in the Tropics).  For a good root system, they need deep, moist, well-draining soil, but they can survive in less favorable conditions, too.  After 3-5 years of moist soil, they can even tolerate drought conditions, and they don’t need fertilization.  They’re not bothered by pollution or heat, and if their mature height is taken into consideration and appropriate varieties are chosen, they’re good choices for urban locations, too.

You might have heard of ginkgo biloba being used as a health supplement—it was a popular early choice, before natural medicine became as popular, due to its reputation for improving memory.  Many ginkgo supplements exist and are marketed for this purpose, but ginkgo can do so much more!  Ginkgo has antioxidants and can help reduce inflammation, which has a positive effect on many dis-eases. In Traditional Chinese Medicine, ginkgo seeds were often used to treat lung maladies (and still are!).  The leaves are used medicinally in addition to the seeds, and they are traditionally thought to have a positive effect on the heart and circulatory system.  The root of ginkgo can be used too, but is thought to be less potent in TCM.  And of course, as recent Western medicine has shown with peer-reviewed studies, ginkgo seems to have a strong impact on the brain—improving memory, focus, and attention.  It’s even been shown to alleviate anxiety in one study.