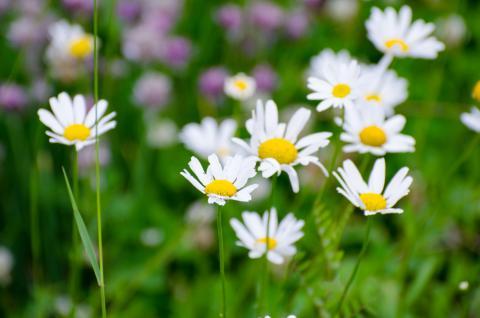 Shasta daisy is a member of the family Asteraceae ⁄ Compositae or Aster family of the genus Leucanthemum Mill. or daisy containing the species Leucanthemum ×superbum (Bergmans ex J.W. Ingram) Bergmans ex Kent. [maximum × lacustre] or daisy. The plant was cultivated in 1890 by Luther Burbank; by crossing a Japanese daisy with an American daisy he created the whitest flower in a garden that reflected moonlight and named it after the snow-capped mountain Mt. Shasta.

Eighty years later the plant was found by Ida Mae, a florist in Atlanta, Georgia, as she was exploring her neighborhood. She began selling the seeds and the flowers in arrangements. Her daughter Mary Ann Gatlin gave the plant to her friend Becky Stewart for her garden and it was found there in 1980 by Bill Funkhouser, a plantsman, who nicknamed the flower “Becky.” The name caught on and the flower became the 2003 Plant Perennial of the Year.

The Shasta daisy is a hardy hybrid perennial that can grow as tall as two to four feet or as little as eight to twelve inches depending on the variety. It is drought- and cold-resistant, making it a good plant for the novice gardener. It has daisy characteristics with large heads that can have white or yellow petals that surround a yellow center. The clumping foliage provides a background for the blooms and other flowers.

How To Grow Shasta Daisies

Growing Shasta daisies requires little maintenance. The seeds may be started indoors in late winter about eight weeks before the last frost in two to three inch pots. The seedlings will emerge in between fifteen to twenty-one days, then place the emerged seedlings in plenty of sunlight or use a grow light. When two leaves have developed place the plant in a sheltered outdoor area for a week and then the plant can be transplanted into the garden. Select an area that gets full sunlight and place the plant in well-draining soil six to twelve inches deep. Plant during the late afternoon or on a cloudy day to lessen plant shock. Remove the plant from the container with your hands and loosen the root ball, then place in the prepared hole and cover with soil, pressing it firmly with your hand. Mulch will help to maintain moisture and keep the soil warm. Water thoroughly once a week early in the morning to give the leaves a chance to dry.

Shasta daisies have several health benefits. They have proven effective in treating gastrointestinal problems like aiding digestion. They are an excellent anti-inflammatory agent and relive the pain of menstruation. Used in tincture form the Shasta daisy is a holistic treatment for atopic dermatitis, gout, and the effects of rheumatoid arthritis. It can be used topically to heal wounds and scratches. The plant is rich in vitamin C which will boost the immune system. Shasta daisy essence is used in aromatic healing. It works best with people who overthink problems and helps them balance their emotions with their intellect. It helps to lessen the effects of mental clutter. Shasta daisy will calm panic attacks, enhance creativity and intellect, and benefit those individuals with mental illnesses. The essence will help people work in groups and find their inspiration.

Shasta daisies make excellent cut flowers. The plant can be used as a border, in a meadow garden, and as a container plant. They are a good addition to a butterfly garden and bloom from early summer to autumn. The dark, green glossy foliage makes a striking background for the bright colored flowers and add a beautiful accent to any landscape design. Shasta daisies are an edible flower. The entire young plant that includes the bloom, leaves, and flower buds can be used in salads and soups. The head of the flower can be pickled and used much like capers.