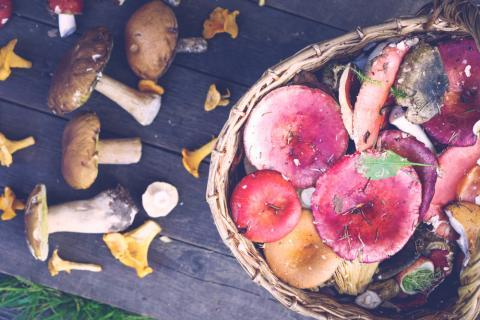 Tis the season here in the Southern Rockies to go bolete hunting!  I’ve been foraging for nearly a decade what I thought were true King Boletes (Boletus edulis). Turns out that despite what the older guidebooks say, what I’ve been roasting, eating, and making medicinal extracts from is actually the newly named Boletus rubriceps, with “ceps” being another word for bolete and “rubri” meaning red. The mushroom cap ranges in color from a burgundy red to an orangish red if sun faded. The mushroom is, appropriately enough, now known as the Rocky Mountain Red.

Boletes of various species reside all over North America, but not all are edible and not all are delicious. As with the Rocky Mountain Red, many of these boletes were previously thought to be King Bolete, the type species for the bolete genus. The genetics beg to differ and it looks like what we have instead here in North America are related to but different species than King Bolete (1).  That’s OK, some of ours are still seriously good edibles. These include Boletus barrowsii, a ghostly white and plump specimen that some recent Durango area transplants found. (Not fair!  I’ve been here for a decade and haven’t stumbled across one…). The White King Bolete, as it’s known, is a choice edible though is less common than the Rocky Mountain Red.

Boletes are mycorrhizal mushrooms, meaning that they grow in association with plants. In the case of the Rocky Mountain Red where I live, they’re partnered with Engelmann Spruce and, possibly, other conifers in subalpine elevations. White King Boletes live under Pines, especially Ponderosa (2).  One reason mycorrhizal mushrooms at your local market are so expensive is that they don’t lend themselves to cultivation by us humans.  There is a delicate balance between the mushroom, its tree, and the soil that is necessary for mushroom growth.

Boletes (at least the edible ones) are quite nutritious, being high in good quality protein as well as a wide variety of vitamins and minerals.

You squeamish folks, be warned: Boletes can be “wormy.”  You can simply cut around the fly maggots if you don’t want a little extra protein with your mushroom meal.  The younger, more firm mushrooms will have fewer critters within them, and if it’s really a freshie, maybe none at all.  The larger mushrooms that have been hanging around will be a maggot metropolis.

Note that boletes don’t last long in the fridge. I process them as soon as I get them home.  If I do store them in the fridge until the next day, it’s in a bowl with a wet towel over top.

Ready to cook?  Brush off your mushrooms and remove the yellowish green spongy layer from the bottom of the cap. (Sounds appetizing, doesn’t it?)  Do not pile mushroom chunks up in a pan to sauté unless you want a slimy, rubbery meal. To bring out the rich, earthy, umami flavor of boletes (and to avoid the slimy texture), chop them into thin slices and either dry sauté them, roast them in the oven to dry, or use a food dehydrator to dry them before then cooking in your favorite fat (butter!) and spices (salt and pepper!).  They also store well dried. I like to eat them by themselves, but they’re also a great base for sauces, gravies, and stews. A little bit of dried bolete goes a long way.

Immune System Support: All edible and medicinal mushrooms tested so far have beneficial activities on the immune system, and boletes are no exception.  Get sick multiple times a year?  Eat mushrooms a few times a week.

Antioxidants: King Bolete contains tocopherols, beta-carotene, anthocyanins, quercetin gallic acid, rosmarinic acid, caffeic acid and a wide variety of other antioxidants…It is one of the most strongly antioxidant mushrooms tested so far (3, 4). Other edible boletes have similar properties, especially the pigmented Rocky Mountain Red (pigments in nature tend to be antioxidant).

Anti-Tumor: King Boletes show anti-tumor effects in a variety of experimental models, and multiple components of the mushroom, from its polysaccharides to its RNA were active (5-9). Boletes growing in the Bavarian Forest of Germany were reputed to be responsible for the low cancer incidence in the local population who ate them (10).  Indeed, essentially all edible and medicinal mushrooms tested to date show some degree of anti-tumor activity whether in a dish in the lab, in an animal model or, in some cases, in clinical trials.  How all of this translates to your local edible bolete is not known, but it can’t hurt to eat them as part of a long-term plan for health.

Remember, not all boletes are edible. Learn about those from your area. A few guidebooks plus joining the local mycological society and attending forays are the best ways to get started.  As is oft repeated in mushroom books and blogs, any mushroom is edible once…

Another note: boletes accumulate heavy metals such as mercury (yum!), so if gathering your own, make sure you’re not downhill or downstream from, say, a mine.