3 Reasons To Ditch Plastic For Good 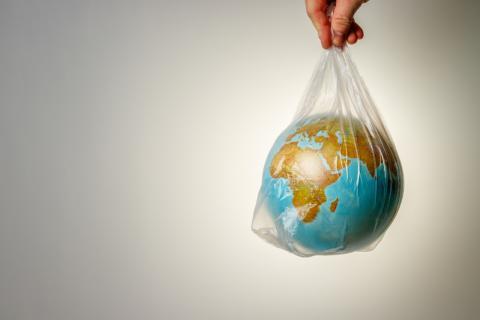 It's almost impossible to completely avoid plastic nowadays. It's everywhere—in our beds, in our clothes, and even in our food. But we can do our best to avoid it as much as physically possible. You might be wondering why it matters? Here are three reasons you should kiss plastic goodbye.

Plastic never goes away. With all the disposable plastic out there, you may think it does but that’s simply not true. When you throw away a “disposable” plastic cup, straw, or fork, it will sit in the landfill (or worse, the environment) for decades to come. It takes plastic hundreds upon hundreds of years to break down. During that time, it’s often mistaken for food by animals, which leads to a painful death by starvation. When plastic eventually does break down, it simply turns into microplastics which remain in our environment and enter the very bloodstream of the animals we eat, eventually winding up in us.

Since its creation in the 1950s, we’ve generated over 8.3 billion tons of plastic. Most of that has been discarded by now. Only 9 percent of plastic actually gets recycled. The rest is sitting in landfills or in our natural environment, leaching hazardous toxins. It takes a lot of resources, time, and energy to make new, virgin plastic (which is what most businesses insist on using for their products to give them that shiny, new look). The other problem with plastic is that when it does get recycled, it can technically only be downcycled. This means it can never be the same thing more than once, and it gets turned into an item of lesser quality. This means that ultimately, plastic becomes unrecyclable, since it can only be downgraded. In other words: It'll end up as trash eventually, regardless if it gets recycled the first time around. That doesn't mean we shouldn't recycle plastic; it simply shows the inefficiency of it.

We ultimately have to move away from using plastics altogether, and find a better use for the ones already in our environment. Glass and metal never lose their quality when they get recycled, making them infinitely recyclable. They're also way more durable and can be used for longer periods of time without even needing to be recycled. For example, I can reuse a metal fork way longer than a plastic fork, or a glass cup way longer than a plastic cup. Switching to reusables is so much more efficient for the environment as a whole, instead of focusing on single use plastic items.

2. Plastic is bad for your health.

Yet another reason to ditch plastic? It's bad for your health. Plastic tends to leach toxins over time, which can be especially harmful when using it to store food or water. After all, who wants toxins leaching into their food? The most talked about health concern regarding plastic is definitely BPA: bisphenol, which is found in plastic with resin number 7. There have been several studies linking the toxicity levels of BPA to human health, such as heart problems, attention disorders in children, and even cancer. That's because it's an endocrine disrupter, with high estrogenic levels that can cause adverse effects on humans. The thing is, even when something says it's "BPA free," it doesn't necessarily guarantee its safety. The replacements they found for BPA are actually, in most cases, worse than BPA. In fact, one study found that three BPA alternatives were actually more estrogenic than BPA itself, which makes them just as dangerous, if not more.

Possibly even creepier, and more concerning, is the fact we may be inadvertently eating plastic. I say this because it may be contaminating your food. I'll explain: Let’s assume a rubber duck gets lost in the ocean. Over time, it will break down into microscopic parts. These tiny parts have absorbed high concentrated levels of agricultural and industrial toxins over time. Worse yet, animals may mistake the plastic for food and wind up eating it, absorbing the toxins into their blood stream. What happens next? They either die or end up as seafood on our plates. In this way, we are consuming plastic and all the toxins that go with it, indirectly.

Is this what we want in our bodies? Plastic just isn't worth the risk. I suggest you slowly phase out plastic from your life as much as possible to live your healthiest life. Pay attention to how products are packaged, and opt for glass, paper, cardboard or metal packaging whenever possible. Also, eating more fruits and vegetables can help keep potential plastic contamination out of your bloodstream. You don't necessarily have to stop eating fish altogether, but you should be mindful of your intake.

3. Plastic is a money drainer.

So not only is plastic bad for the Earth and our own health: It's also bad for our wallets. When we purchase plastic, usually it's single use only. For example, plastic cups, water bottles, utensils, and plates are only used once before being discarded. This is a huge waste of money, considering you'll just need to buy more after you dump them out. My parents used to buy a huge pack of water bottles at the store when I was in high school. They'd go through anywhere from one to two packs a week, which cost around $10 a pack. That's essentially $80 down the drain every month on water bottles alone, resulting in approximately $960 wasted every year, give or take. That money could've gone to paying off bills, or towards savings. Now just pair that with any other plastic, single-use items we bought over that year. In no time, the money is stacking up and the blindfold is taken off your eyes.

Saving money is one of the reasons I made the switch to a zero-waste lifestyle. I really wanted to start better budgeting my finances and felt like I was purchasing unnecessary items over and over again. Of course I cut back plastic to help the Earth and my health, but I'd be a liar if I said I did it for only those two reasons. The money savings really help motivate you, especially when you need to pinch pennies. A lot of zero-waste, reusable products cost more upfront but quickly pay themselves off in the long run. For example, my reusable water bottle was a one-time purchase of approximately $38. That purchase has more than made itself up over the course of time I've had it.

I really recommend you take a look at what you're spending your money on. Are they single use items you can find reusable alternatives to? Are you ordering too much takeout when you have food sitting in your fridge waiting to be made? Are you buying more makeup in plastic packaging than you actually wind up using? Really analyze where your money is going and figure out ways to cut it. For example, challenge yourself to use up all the makeup you have before purchasing more. Or, refuse to order take out and cook in all week. You'd be surprised how the simplest things can help save money and the environment all at once. And guess what? You'll feel great doing it too.

Now that you know why you should avoid plastic, here are some ways to help end plastic pollution. How will you cut plastic from your life?