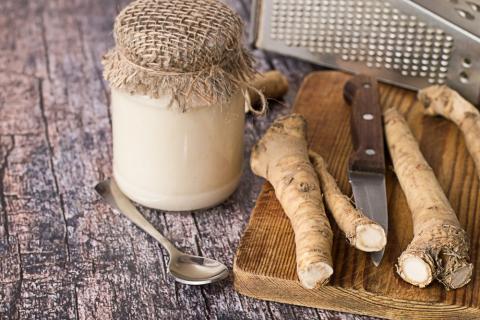 Horseradish is a member of the family Brassicaceae, commonly known as the Mustard family of the genus Armoracia G. Gaertn., B. Mey. & Scherb. or armoracia P of the species Armoracia rusticana G. Gaertn., B. Mey. & Scherb. or horseradish P. The origin of the plant is not clear, but it is found today in Europe and Asia and was first cultivated in Germany. Horseradish got its name from its large size and coarse texture and the term radish is the English translation of the Latin word “radix,” defined as “root.”

The History of Horseradish

Horseradish has been used for millennia during the Jewish Passover feast and the Greeks used it as a rub applied on the back to relieve pain. It became popular in Europe during the Renaissance and by the 17th century was a standard relish for beef and oysters in English cuisine. The plant was brought to North America by the Pilgrims and was cultivated in the northeastern region of the United States by the early 19th century, becoming a commercial crop by mid-century. Horseradish went west with the settlers who created regional markets and today six million gallons of prepared horseradish is sold annually—enough to add to sandwiches that can circle the Earth twelve times.

Horseradish is a long, tapering root with a tan outer skin and white flesh that is thick and rough. It has broad, crinkled leaves and grows from six to twelve inches in length with knots at the end of the root. The plant is a perennial with roots that have a pungent, sharp, and unique flavor. It can be an invasive plant because if all of the root is not removed from the ground it will continue to grow and take over a garden; this makes it an ideal plant for containers.

As a healing herb, horseradish is rich in nutrients and contains vitamin C, calcium, folate, magnesium, manganese, potassium, and zinc. Horseradish has a high content of vegetable proteins. It is high in dietary fiber and contains enzymes and oils like sinigrin, which is a glucosinolate and acts as an antioxidant.

There are many health benefits to including horseradish in the diet. Its fiber content makes it ideal for digestion and it aids in a healthy digestive system. The vitamin C present in the herb boosts the immune system and its antioxidants reduce the production of free radicals, thus inhibiting the formation and growth of cancers. The potassium found in horseradish regulates blood pressure and benefits the entire cardiovascular system, thus reducing the risk of developing heart disease and stroke.

Other health benefits of horseradish include contributing to a strong, healthy skeletal system because of its calcium content. It is ideal for pregnancies, in moderation, because the folate in the herb protects both the mother and fetus. It is a catalyst in the development of the fetus and eliminates the incidence of neural tube defects. The protein in horseradish is directly absorbed into the body, resulting in a boost in energy, accelerating the repair of damaged tissue, and raising the ability to concentrate.

How to Grow Horseradish

Growing horseradish does well in growing zones four to seven, which are temperate climates. It is best to plant in spring and can be started from crowns purchased from a nursery or roots from the supermarket. Only two to three plants are needed for household use.

Set roots or crowns in fertile soil that drains well a few weeks before the last frost. Place roots diagonally in the ground with the tip of the root down and the stem end up. The leaves can grow from three to four feet in height and it is advised to clip developing flowers in the spring to avoid over production and invasion. Harvest in late fall after several frosts have damaged the leaves.

Horseradish is ideal for growing in containers. Because the root system of the plant can grow to several feet long, confining the plant makes it easy to harvest and eliminates the probability of the horseradish to take over the garden. Use pots or containers with drain holes and enough room for root growth—the container should be from twenty-four to thirty-six inches deep. Place in the pot as in the garden and cover with one inch of soil and one inch of mulch. Be sure to keep the soil moist but not wet. The root should be ready to harvest in 140 to 160 days.