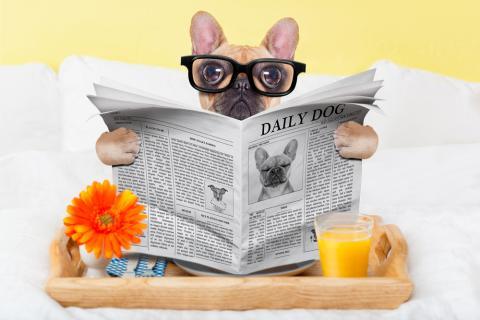 We found our dog, an Airedale/coonhound mix, while on a hike deep in the jungles of Kauai. Starving, flea-ridden, and skittish, the malnourished dog managed to keep up with us for the entirety of our 5-mile hike, lured along by a stale granola bar we had packed. As soon as my husband named him (Mohihi Wai’ale’ale, or Mohi for short, after the trail on which he was found), it was game over. We brought him home.

I’ve adopted puppies and dogs alike in the past, but Mohi was different. He had originally been raised to be a hunting dog, had spent most of his life in a crate, and was used to human contact in the form of hits, smacks, or jabs to the ribs. As such, he didn’t understand what it meant to be petted, loved, or trained in a positive way.

This last part—positive training—makes a big difference. Rather than say “no!” when Mohi did something wrong, we ignored his undesirable behavior, instead choosing to praise him with treats or high-reward pats when he did something correct. Turns out that there’s something to this method.

What is holistic-based dog training?

Holistic dog training is better known as positive reinforcement training. The Humane Society defines it as, “[using] praise and/or treats to reward your dog for doing something you want him to do. Because the reward makes him more likely to repeat the behavior, positive reinforcement is one of your most powerful tools for shaping or changing your dog's behavior.”

This method of training doesn’t work if you wait. Rather, it’s important to reward your dog as soon as he or she does what you want. Using a clicker can be helpful here. Clickers are small and inexpensive, and mark the positive behavior so that the dog better understands the correlation.

What does the research say about holistic dog training?

While there are still those that consider this type of training “weak,” or those that make comments like “So does the dog own you or do you own the dog?”, it’s important to look at the research that supports positive training. A 2009 survey from the University of Pennsylvania found that dog owners who use aggressive training methods, such as hitting, kicking, growling, or pinning the dog down, will encourage aggressive behaviors in their pets. Similarly, dogs were not found to be motivated by dominance as explained by the University of Bristol’s Department of Clinical Veterinary Sciences. Furthermore, training devices like shock collars can have negative effects, both for barking and in terms of your dog’s physical and emotional wellbeing. A 2003 study from the University of Utrecht found that shocked dogs are more stressed and anxious, may learn to connect their handlers with shocks, and even understand a connection between their handler giving orders for a shock.

On the other hand, holistic dog training shows far more promising, and less detrimental, results. A 2008 study found an association between low levels of undesirable behavior and positive reinforcement training, or a lack of punishment training, in dogs, while another study demonstrated that rewards-based training is linked to higher levels of obedience.

How do I start holistic dog training?

There are a few simple tips to remember as you begin a more holistic method of dog training. First, keep your requests short. Dogs don’t understand full sentences, but they can begin to learn words like sit, stay, wait, come, heel, and down.

Watch your dog closely—as soon as he or she performs the command, provide a reward. Look for treats that your dog enjoys, are small enough that he or she can quickly eat, and are easy enough for you to carry around. It’s important to repeat the action several times and over the course of days and months.

Keep in mind that your dog will get tired, so keep training sessions short. I like working with my dog roughly 30 minutes each day. It can be helpful to walk, run, or play with your dog beforehand so that excess energy doesn’t keep your dog from staying focused.

How long will it take for my dog to learn?

This depends on many factors–the dog’s age, temperament, personality, energy, and, most importantly, your consistency. The goal is to eventually be able to train your dog to simply enjoy praise from you, regardless of a treat.

If you find your dog starting to ignore your commands, carry a few treats to remind him or her every once in a while.

The term holistic is a bit open-ended and will depend on your dog’s individual diet, but for the most part this means finding treats that are wholesome; made of natural fruits, vegetables, meats, and starches; and often organic. I prefer to feed my dogs grain-free treats, like dried liver, dried salmon, dried cod, or even dried sweet potato skins. It can be helpful to cut the pieces into small squares and carry them in a reusable bag. Short on cash or simply looking to maximize your dog’s nutrition? Make your own dog treats with a recipe here.

Have you tried holistic dog training? Has it worked? Let us know in the comments below!