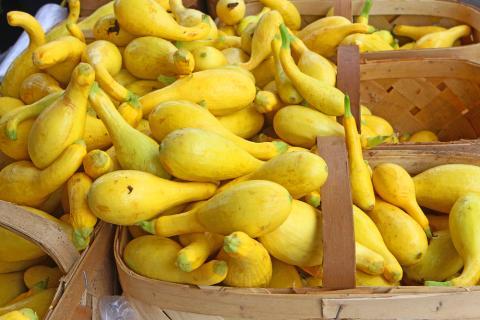 There are two species of crookneck squash; the winter squash is Cucurbita maxima and the summer species is C. pepo. They are native to Mexico and Central America and before the European invasion they were introduced throughout North America but not to South America. They have been a staple food for millennia and were first documented in 1591. Crookneck squash never became popular in Europe and England because of their short growing season and cool summers.

Crookneck squash is a warm climate plant and does well in the sub-tropics and tropics and continues to be a major crop in the American tropical zones. The winter crookneck squash is commonly known as Pennsylvania Dutch Crookneck Squash. The summer crookneck squashes are said to be the oldest of the summer squashes and were cultivated by the Missouri tribe of Native Peoples known as the Arikara. The yellow crookneck squash was first documented in 1807 in Thomas Jefferson’s “Garden Book.” The seeds were cultivated a century before in New Jersey. It is one of the few summer squashes that if left on the vine will harden into a gourd. It is a versatile food.

Summer crookneck squash can be found in both green and yellow varieties. Typically, summer crookneck squashes have a round bulbous bottom and taper to a curved neck at the vine end. The yellow variety is light in color with warty skin that deepens in color and gets more warts as it matures. The flesh is pale and meaty with a subtly sweet flavor. They grow from eight to ten inches when mature but it is best to harvest them before they mature, when they reach six inches in length. They are rather fragile and can be stored in the refrigerator for about four days or will last much longer in the freezer.

The winter crookneck squash, or as previously stated the Pennsylvania Dutch Crookneck Squash, has been cultivated in the Amish communities in Pennsylvania since the 19th century. It looks like a large butternut squash with a long neck. The flesh is deep orange and is found throughout the entire fruit and has a rich flavor. It grows to approximately twenty pounds and keeps well. They are late growing plants with a hard outer skin.

Summer crookneck squash is rich in nutrients. It contains vitamins B1 (thiamine), B2 (riboflavin), B3 (niacin), B6 (pyridoxine), and B9 (folate). Other vitamins found in summer crookneck squash are vitamins C, K, E, and A. It also has a high mineral count that includes sodium, magnesium, potassium, calcium, iron, zinc, and phosphorus. Containing these nutrients make them an Ayurvedic food.

Summer crookneck squash reduces the risk of developing heart disease and strokes because it is rich in magnesium. It lowers blood pressure and with the presence of vitamin C keeps the arteries healthy and pliable which lowers the incidence of hardening of the arteries. The antioxidants are a factor lessening the risk of developing age-related eye disease like macular degeneration.

As an anti-inflammatory, summer crookneck squash is rich in carotenoids like lutein, zeaxanthin, and beta-carotene. They are a factor in controlling damage done by free radicals. Crookneck squash also contains a significant amount of omega-3 fatty acids, all factors in reducing the risk of inflammation of the gastrointestinal system.

There are many recipes that work with yellow crookneck squash. They can be grated and included in pancakes, fritters, and quick-breads. Used raw, they add depth to salads. As a substitute for noodles they can be thinly sliced lengthwise in strips and used in place of spaghetti or sliced lengthwise to use as lasagna noodles. They can be baked, broiled, fried, grilled, and roasted with other vegetables. They can be halved and stuffed with meats or cheeses. All of the fruit can be eaten, including the blossoms.

Crookneck squashes are an easily grown plant in the backyard garden. They are fast growing and provide fruit the entire summer. The summer varieties should be harvested while the skins are soft which will encourage the plant to produce more squash. Planting is best done after the last frost in fertilized soil. They do well in mounds containing three to four seeds per hill and placed three to four feet apart. They should be sown in warm soil to a depth of one inch and covered with soil that is not packed and then watered. During the growing season they should be watered every two to three days to keep the ground moist.