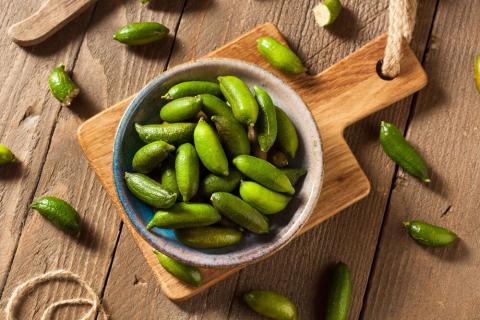 Finger limes are a member of the family Rutaceae, commonly known as the Rue family of the genus Microcitrus Swingle or microcitrus P and contains two species Australian finger limes and Australian round limes. There are many varieties of the fruit which are also known as the caviar of citrus. The tree is native to Australia and can be found today in the rainforests along the borders of southeast Queensland and northern New South Wales, where they grow profusely out of the direct sun. Finger limes were once abundant but the invading Europeans cleared the land for settlements, destroying much of the trees. The fruit has been used by the people of the Aboriginal tribes for millennia, not only as food but for medicinal purposes as well. They would apply it as a topical antiseptic and use it to cure illnesses. In 1965, Dr. Joe Furr received the tree and donated several to the University of California a year later. Though available in California, finger limes are difficult to obtain (though available online). In Australia, they are a popular tree for "bush tuckers," also known as foragers.

Finger limes are not like the limes that grow in the United States; they are oblong in shape, much like a finger—some are short and stout while others are long and slender. There are many varieties that grow naturally in the wild. The skin is usually green but some can have a pink-red tone, while others are purple in hue. When sliced open small, transparent beads of juice spill out. Their flavor is not quite as tart as traditional limes as it bursts in the mouth like caviar.

1. Finger limes are rich in vitamins C and E and contain a significant amount of potassium and folate. Their vitamin C content is three times richer than that found in mandarin oranges. The pink varieties have a significantly higher content of vitamin E than other sources. Other nutrients found in finger limes are fiber, calcium, and iron. Scientists have discovered that there are not only known essential oils present in the skin but six unique essential oils.

2. The high content of vitamin C in finger limes can reduce the risk of developing cancer and flu. It helps to heal wounds and sores and topically applied reduces wrinkles and other skin aging problems. They also reduce the incidents of acne, psoriasis, and rosacea, and help to prevent uneven skin pigmentation.

3. The amount of potassium in finger limes significantly maintains healthy levels of blood pressure. Adding finger limes to the diet reduces the risk of developing heart disease and stroke. It reduces the risk of developing kidney stones due to an accumulation of calcium by maintaining healthy calcium levels in the body. Another nutrient found in them is vitamin A, which aids in ocular health and reduces the incidence of night blindness and other vision maladies.

4. Finger limes have been used to make products like perfumes, shampoos, aromatic oils, and moisturizing creams. The fruit is a replacement for caviar in a vegan diet and is used in making vegan sushi. They can be added to cocktails and made into jams and jellies. The leaves can be ground to spice meat and fish dishes and are used in baked goods.

5. Growing finger lime trees is a good way to insure a continuous supply of fruit. They are easy to grow and maintain and mature quickly. They are an Australian tropical fruit that needs a shady location in moist soil. For cold climates these trees do well as container plants and can accent a patio in the summer and be brought inside during the winter months. Use fifteen-inch containers and high quality potting soil. They do best in a sunny location by a window.