Superfood 101: The Health Benefits Of Boysenberries 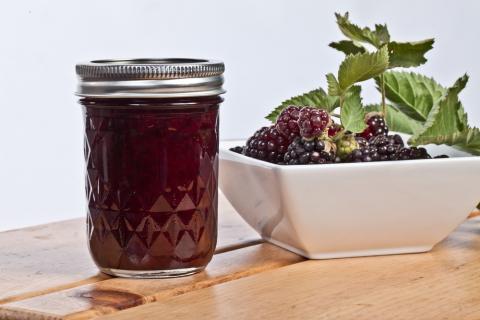 You might be surprised to learn that boysenberries are so closely related to blackberries that the United States Department of Agriculture (USDA) has no separate listing for them. However, boysenberries are classified in the genus Rubus of the species R. ursinus x idaeus. The plant was originally bred by Rudolph Boysen, a California horticulturist, in 1923, but he ceased his experimentation when he sold his farm. Later that decade George M. Darrow of the USDA began an investigation to find this berry. He enlisted the help of California berry expert Walter Knott. They found several frail vines on Boysen’s former property and relocated them to Knott’s farm where he cultivated them to fruit. Knott began selling boysenberries at his farm stand in 1935 and named the plant after Boysen. The growing season of boysenberries is brief and once harvested it is advisable to use them within a few days; however, they freeze well to be used at a later date. Boysenberries can be used in a variety of applications: made into jams or preserves, eaten as a snack, baked into pies and tarts, as a syrup ingredient. They are highly nutritious and are beneficial to maintain a healthy body.

Boysenberry plants mature to up to six feet long and produce a deep purple berry that grows to an inch in diameter and more than an inch in length after flowering a white blossom. These large berries can be found growing on trailing vines, and unlike blackberries, boysenberries do not grow on upright bushes. The berries are made up of small cells that contain a single seed and are compactly formed around a solid core. When mature they turn a deep maroon hue with a rich, complex flavor that is slightly acidic and sweeter than blackberries. They have a fragile texture and are extremely juicy in consistency.

1. Boysenberries are packed with nutrients.

3. Boysenberries are full of antioxidants that fight inflammation.

The antioxidants found in boysenberries prevent inflammation, thus reducing the risk of developing arthritis and slowing the growth of cancer cells. The fiber present in boysenberries adds bulk to the stool, reducing the risk of colon cancer, gastrointestinal diseases, and constipation. They also contain folate that is vital in the metabolism of amino acids. Folate aids in the growth of new cells and reduces the risk of birth defects in the fetus, making it advantageous for pregnant women.

Boysenberry plants do well in containers and can be placed around a patio or as an accent along a fence. Put one plant per container (with drainage holes) and add stones to the bottom before planting. Be sure to cover the plant with netting once it begins to produce fruit.

Boysenberry vines can be planted by seed in the garden or by cuttings from mature plants. Plant six inches of the cutting or bend the vine that has yet to fruit into the ground about four inches deep. The cuttings or seeds should be planted about five feet apart with stakes to train the vines. It is suggested to sink a stake at each end of the row and string a wire between them; as the vine grows in length they can be tied to the wire to keep the fruit off of the ground. They produce the fruit on the vine after a year and must be pruned after harvesting. The plant will produce fruit for several years.