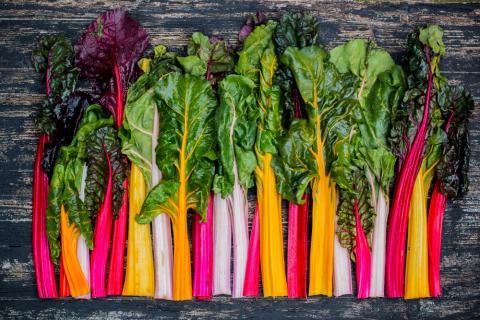 Chard is in the family Chenopodiaceae, commonly known as the goosefoot family, in the genus Beta L. or beet P. This genus contains ten species of beets and two subspecies, one of which is chard, scientifically known as Beta vulgaris L. ssp. cicla (L.) W.D.J. Koch or chard P. Chard is native to the Mediterranean basin, but because the plant is so closely related to the beet it has been difficult to track its history. It is said that it was first used as a food approximately 2500 years ago. Its nomenclature has an interesting history; because it originally grew leaves that were similar to cardoons, artichokes, and beets the names were interchangeable. That ended when a Swiss scientist cataloged the plant and chard began to be known as Swiss chard and became commonly included in the term “greens.” It is used in many recipes but predominantly in soups and rice dishes. It is a highly nutritious food with many health benefits.

Chard, though it continues to resemble the beet plants, has its own unique characteristics—one  in particular is the variety of colors in which they grow. The leaves can be shades of green, white, beige, yellow, orange, pink, purple, and red due to the combination of phytonutrients of the plants. The heavy veins of leaves are known as midribs and the stalks are called petioles. The size of the leaves varies according to the variety, but basically it has a thick stem and large leaves.

Chard is an excellent plant to add to a vegetable garden. It is a cold weather tolerant biennial and though native to the mild region of the Mediterranean it can withstand a light frost. It can be planted from seed in early spring or in late summer for a fall crop. Seeds should be planted one-half inch deep in rows that are eighteen to twenty-four inches apart; then thin the seedlings to eight to twelve inches apart. Harvest the stalk, leaving about two inches of the plant in the ground for a second crop. It does well in sandy soil.

Chard is rich in nutrients. Its vitamin content includes vitamins K, A, C, and E. Also included are the vitamins B1 or thiamin, B2 or riboflavin, B3 or niacin, B5 or pantothenic acid, and B6. Chard has a high mineral content that includes magnesium, copper, manganese, potassium, calcium, phosphorous, iron, and zinc, Other nutrients found in chard are fiber, proteins, folates, choline and selenium.

Considered a healing food, chard can lessen the risk of developing diabetes. This is because it contains syringic acid, a factor in maintaining blood sugar levels by breaking down carbohydrates into simple sugars. The result is the prevention of extremely high or extremely low levels of blood sugar. It also aids in ocular health with its beta-carotene content. This reduces the risk of developing macular degeneration, night blindness, glaucoma, and other diseases of the eye.

Because chard is rich in vitamins C and E and several antioxidants, it reduces the presence of free radicals in the body. Free radicals are a natural byproduct of cellular metabolism and are a factor in the development of cancers. Chard is also rich in calcium, providing needed nutrients for the growth, development, and maintenance of the skeletal system.

As a food to promote a healthy circulatory system, chard enhances the blood flow, circulating oxygen to the body because of its content of iron and copper. This enhances thought processes, reduces the risk of anemia, and lessens fatigue and weakness. Because it also contains potassium it maintains a healthy blood pressure which reduces the risk of heart disease and stroke. Chard also has biotin which is beneficial to the hair follicles, stimulating the growth of healthy hair.