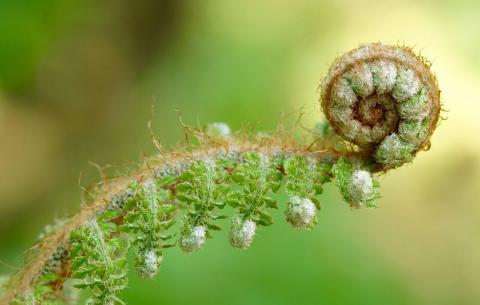 Fiddleheads are a growth stage in the life cycle of the fern that is a member of the family Dryopteridaceae, commonly known as the Wood Fern family of the genus Matteuccia Todaro or ostrich fern P. whose species name is Matteuccia struthiopteris (L.) Todaro. Though several immature fern fronds are eaten, the oyster and cinnamon ferns are the only ones that are definitely edible. They can be found growing in North America in damp areas along the eastern seaboard, particularly Vermont, Maine, and New Brunswick. Their name is said to be derived from their shape, as it resembles the head of a violin or fiddle. Fiddleheads are a vital part of the development in the life cycle of the fern because they regenerate by the spread of rhizomes or roots and provide the nutrients for the root system. They are a summer plant that dies back in the fall and overharvesting can destroy the plant. They are packed with nutrients and can be used in many recipes, both cooked and raw.

Fiddleheads are the immature shoots of the fern that are tightly wound into a flat, circular shape. The stems are Kelly green and covered with fuzzy, tawny brown scales. They have a crunchy texture that is succulent, having a slight gelatin-textured flesh. Their raw flavor combines grassy and woodsy notes with a tinge of tannic and mineral accent. When cooked, the flavor becomes more full, resembling that of artichoke and pine nuts and dissipating the tinge of tannic. They have a short season (available during April and May) and can be found in farmer’s markets and grocery stores. It is important to note that all fiddleheads are not edible; though ostrich and cinnamon ferns are safe, other ferns can resemble them but are poisonous (much like mushrooms).

1. Fiddleheads are highly nutritious, containing vitamins A, C, B1, B2, and B3, along with the minerals manganese, calcium, iron, magnesium, phosphorous, potassium, copper, and zinc. They also contain omega-3 and omega-6 fatty acids.

2. The copper content of fiddleheads is essential in the oxygenation of red blood cells. Because of their copper content, they help the body to reduce fatigue, joint pain, and poor brain function. Low levels of copper can inhibit proper growth and slow metabolic activity.

3. Fiddleheads are rich in vitamin B3, also known as niacin. It is an important factor in maintaining healthy cholesterol levels in the body. As a result, it reduces the risk of cardiovascular diseases like stroke and heart attacks. It also contributes to the production of good cholesterol.

4. Rich in vitamin A, fiddleheads are essential in the elimination of free radicals, which damage tissues and cells. Because of this, fiddleheads reduce the risk of developing Parkinson’s and Alzheimer’s diseases. It is also a factor in ocular health, reducing the risk of the development of Stargardt disease, a malady that causes vision loss in children and macular degeneration in older adults.

5. Fiddleheads spoil rapidly and must be used within a few days of harvesting. After two or three days they begin to lose their elasticity and form a gummy film, which indicates that they are no longer edible. It is best to sautee them in olive oil or butter to retain their crunchy texture, but they can be steamed or boiled. Fiddleheads lend themselves to many recipes and complement many other foods, like mushrooms and artichokes.