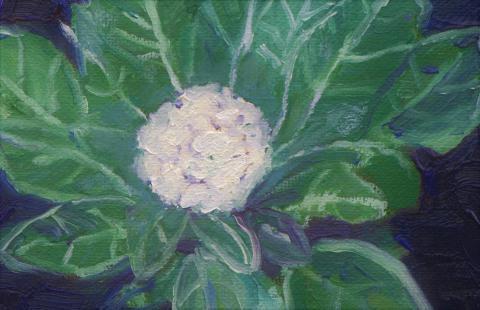 Cauliflower is a member of the family Brassicaceae in the genus Brassica that contains forty species. It is the cultivated member of the cabbage family and is closely related to wild cabbage and broccoli. General consensus is that the plant originated in the area around Cyprus or the Near East. The name cauliflower was derived from the Italian word “caolifliori,” which translates to cabbage flower.  By the 17th century the plant could be found throughout Europe and the pilgrims brought the plant to North America. In Germany, the plant  is known as “blumenkohl;” the French call it “chou floeuri;” and in Spain it is called “clifolor.”  Different cauliflower species were found throughout the world, each with their own unique quality, like the one found in China that has a loose curd like broccoli.

The species of cauliflower that is most common in the United States has rather large heads with compact curds which are the undeveloped flowers of the plant. The curds grow from a main stalk that is surrounded by short, tightly held light green leaves; this prevents the cauliflower from producing chlorophyll, resulting in the cream or white color of the plant. There are several color varieties of cauliflower, like green, which is also known as broccoflower and grows with tight curd heads as does the white variety. The purple cauliflower gets its color from a group of antioxidants called anthocyanins. The orange variety is more nutritious than the white, containing a high content of vitamin A.

Cauliflower has a lot of benefits:

1. Cauliflower reduces the risk of developing several types of cancers, like breast, liver, colon, lung, and stomach. The plant contains chemo-preventive properties that are effective in the initial development of cancers and inhibit the growth of tumors. It also lessens the risk of chemically-induced carcinogens, performing much as an anti-mutagen which stops cancer cells from reproducing.

2. As an anti-inflammatory agent cauliflower has a high content of antioxidants like vitamin C, quercetin, rutin, and caffeic acid, which reduces the incidents of free radicals, resulting in reduction of inflammation. Lowering inflammation results in reducing the risk of heart disease, stroke, diabetes, and Alzheimer’s and Parkinson’s diseases. Cauliflower also contains isothiocyanates which functions on the genetic level, inhibiting inflammation at the initial stage.

3. Cauliflower is rich in glucosinolates, which are enzymes that help the liver produce detoxifying enzymes. It supports the body’s ability to absorb nutrients and remove waste. These enzymes are also beneficial to the digestive tract, preventing the growth of harmful bacteria, thus allowing the maintenance of good bacteria. Cauliflower has a high fiber content that is also beneficial to the digestive system, reducing the incidence of stomach ulcers and colon cancer.

4. For keeping the body’s hormone balance, cauliflower is excellent in preventing excess estrogen formation. This makes it an ideal food for the health of the circulatory system and autoimmune diseases. It helps to prevent chronic fatigue as well as ovarian cancer. It is also a good source of folate, which promotes the healthy neural development in the fetus. This makes it an excellent addition to the diet of pregnant women.

5. Cauliflower contains a significant amount of sulforaphane, a substance that is beneficial to ocular health. It protects the delicate tissues in the retinal area from oxidative stress. This reduces the risk of retinal detachment that results in blindness. It is also significant in the reduction of cataracts, macular degeneration, and other ocular diseases.

Cauliflower is a member of the cabbage family and is closely related to broccoli. It has been cultivated for centuries and can be found throughout the world. It is a staple food and a main side dish for many ethnic cuisines. The white cauliflower is most commonly found in American supermarkets but there are purple and orange varieties that can now be found in many health food stores. It is a food rich in nutrients and is known to prevent cancers, promote ocular health, support a healthy digestive system, fight inflammation, and prevent many other diseases. It is a versatile food and can be used in many recipes.