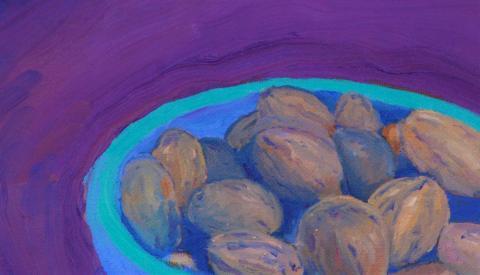 The pecan is a member of the walnut family. The genus contains twenty-two species and the pecan is closely related to the hickory nut. Pecans are native to the central southern regions of what is now the United States. The term pecan is derived from the Algonquin word “paccan” which refers to both hickory and pecan nuts. The pecan was a staple food for the Native Peoples and they made a fermented and intoxicating drink they called “Powcohicora” from which the name hickory nut was derived. The tree was later cultivated in the late 17th and early 19th centuries by Franciscan monks and Spanish colonists in Mexico and was documented in 1711, approximately sixty years prior to documentation of the first recorded planting in what is now the United States. Thomas Jefferson brought the plant to the eastern shore of Virginia and gave George Washington trees to plant at Mount Vernon. In 1846, Antoine, a Louisiana slave, was the first person to successfully graft pecan trees. Pecans became a staple commercial product in the 19th century for American colonists who harvested the nuts from wild groves, but because of the demand for the pecan cultivated orchards began to be planted and the pecan industry was born. Today pecans are commercially grown in Georgia and west to New Mexico in the United States and internationally in Mexico, South America, Israel, and Australia.

The pecan is, as other members of the genus, a drupe or fruit. It is characteristically dark brown in color and oblong in shape, measuring in size from one to three inches in length and one-half to one inch in diameter. They have an outer husk called an involucre that is three to four millimeters thick. The hull of the nut opens into four sections at maturity. They are harvested between October and December and the raw nut is dehydrated to improve storage. Pecans are a rich source of nutrients that include vitamins, minerals, and antioxidants that are beneficial to maintaining a healthy body. They also have a high calorie count (making them an excellent energy food) and contain monounsaturated fatty acids. Their buttery consistency and sweet flavor make them ideal for snacking as well as an ingredient in dessert recipes.

How Pecans Keep You Healthy

1. Pecans contain a significant amount of vitamin E. Particularly gamma-tocopherol is an excellent lipid-soluble antioxidant. This is essential for the maintenance of the mucus membrane cells. It also protects the skin from harmful free radicals. For every 100 grams, the pecan contains twenty-five grams of vitamin E.

2. Pecans are excellent heart healthy food. They are very effective in the control of cholesterol levels in the body. Studies indicate that adding pecans to the diet balances cholesterol because of their high content of monounsaturated fats. They also contain substances like tocopherol that helps to inhibit the oxidation of blood lipids and decreases the LDL.

3. For vegans, pecans are an excellent source of protein, containing three grams of protein to every ounce of pecans. Their rich and naturally sweet flavor makes them ideal for snacks, desserts, and additions to main course dishes. They add bulk to dishes, thus satisfying and reducing the amount of intake. They make a great salty snack, an excellent addition to salads, and a great ingredient for stuffing.

4. Pecans are rich in B complex vitamins that include vitamin B1, also known as thiamin. They are vital to the metabolism, helping to maintain high levels of energy. Thiamin is particularly vital to cell growth and development, making it an ideal snack for children. It is also essential for neurological health.

5. For decreasing the incidence of type-2 diabetes, pecans are an important addition to the diet. They contain vitamins and minerals that maintain and balance blood sugar levels. It is advised for those who have diabetes to eat pecans but for those who do not have type-2 diabetes it will reduce the risk of contracting the disease.

Pecans are native to North America and have been eaten by Native Peoples long before the European invasion. They became a staple food for the settlers and were cultivated by Thomas Jefferson. The pecan became a commercial product because of the demand for the nut and with the introduction of plant grafting by Antoine, a Louisiana slave. Packed with nutrients, the pecan is a popular snack food and a rich source of protein for vegans. Its sweet tastes make it an ideal ingredient in desserts and its bulk makes it advantageous in main course recipes.