Birthstone Series: Scorpio and Black Kyanite for Exploring the Subconscious 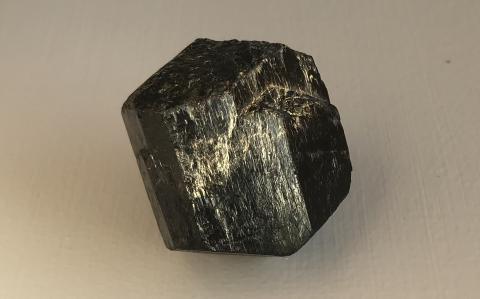 As the sun moves into the deep waters of Scorpio we are all being called to face all that which has been cloaked in the unseen. Scorpio rules the 8th house in the astrological chart which includes magic, sexuality, death, inheritances/other people’s money, investments, crimes, dreaming, regeneration, reincarnation, shamanism, the subconscious mind and the mystical underworld. With black kyanite as an ally, we can not only navigate this time with greater ease and support, but perhaps uncover the treasures which await us if we but peer into the depths with courage.

In a world which is becoming more of a Scorpio-playground almost on a daily, where hidden crimes are coming to light—including those of a sexual nature—where the collective subconscious mind is in the purge of a lifetime, and where dreams seem more palpable than ever, as we begin, as a world, to embrace more of the magical, unseen, shamanic world, black kyanite has never been more important to carry in the toolbox or your back pocket.

Black kyanite assists us in traversing the depths of the subconscious mind and is a great tool to use while practicing meditation or hypnotherapy. Yoga Nidra, which is a deep subconscious mind navigation practice, is greatly benefitted by utilizing black kyanite for effective release. This stone also protects from the harmful effects which can sometimes threaten during a Scorpio-transit by assisting the body field in releasing discordant energies and balancing the chakras as they purge old information, which is sure to happen just being alive at this time. Hypnotherapy and Yoga Nidra are both practices which work directly with the subconscious mind and can be more effective than ever during a Scorpio time of the year, especially with the help of black kyanite.

In the current time period we are in, humanity is waking up to a new level of consciousness. Old wounds and ineffective patterns of the past are being seen and cleansed from the collective psyche. Gifts which have been stifled, especially those of a psychic nature, are coming to light for embrace as Scorpio shines the light into the waters of our depths. Black kyanite is a potent talisman for assisting one in owning gifts of a mystical nature and is a resonant tool of the shaman or aspiring shaman.

Kyanite of the black variety is stellar at opening the lines of communication between individuals and in the collective stream. In a time where the massive revealing of all things hidden, including sexual abuse and other crimes which have been covered or left unsaid for perhaps too long, black kyanite can be very supportive to those who feel deeply affected by this information. It can even assist, when used with intention ceremonially, to support the type of communication and articulation needed in order to both expose and deal appropriately with all things coming to light on a grander scale.

In order to support the truth coming to light around all things “crooked” or of a darker nature, place a piece of black kyanite on your altar and declare:

“May the words which need to be spoken in order to bring justice and light to all things hidden, and all things dark or shrouded, be spoken by those who can affect deep and abiding change. May the tongues of those who know, be loosed, and may the darkness reveal the hidden treasures found when truth is exposed for what it is. In the depths of Scorpio’s waters, with the assistance of black kyanite, I embrace my magical gifts and stand as an agent of change for a world in transition.”

Black kyanite is deeply grounding and especially effective for root chakra healing and attunement which is of great importance when tuning into and receiving the gifts associated with Scorpio’s influence on investments and all forms of “other people’s money.” Carrying a piece of black kyanite around or keeping one nearby to hold while dealing with stocks and bonds or other monetary investments could prove extra profitable.

Past lives can also be more clearing tapped into during a Scorpio period with the assistance of black kyanite. Information which was explored in other lifetimes as well as possible blocks or karmic debris which needs addressing will feel more accessible with the help of black kyanite during a Scorpio transit. Sitting with black kyanite in meditation or in a past life session can help open the doors to the storehouse of information held in the subconscious mind and akashic field.

No matter who you are or where Scorpio affects your chart, you would do well to keep a piece of black kyanite around during this time of the year in order to help bring fluidity, cleansing and clarity to a time which could otherwise feel chaotic and confusing.

Properties of black kyanite include: