Your Guide To Summer Flowers: Zinnia 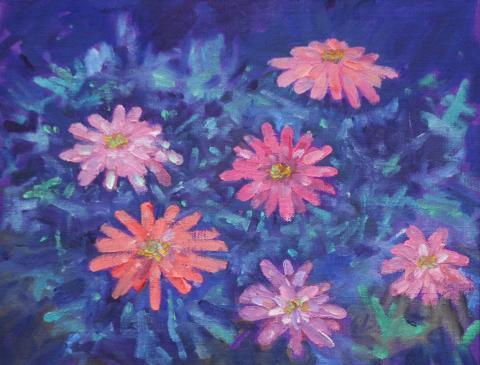 The zinnia is a member of the Family Asteraceae, which includes the Aster and contains seven species. It is an annual that is native to Mexico and is found from the southern United States to Chile. It was not considered an attractive flower in Mexico where they called it "mal de ojos," meaning "bad on the eyes,” or even “the evil eye.” The plant was brought to Europe in the 18th century where Johann Gottfried Zinn, a German medical professor, wrote the first description of the flower. He studied the eye, which contains a part known as zonule of Zinn or Zinn’s membrane -- thus the name of the plant. The flower became popular in Europe in the late 19th century when herbalists used them as breeders in Germany and they caught on in Holland and Italy. In the United States from the 1920s the plant was bred for size and gained popularity by mid-century. There are only ten varieties that are diverse in size, shape, and color.

Zinnias grow from one to three feet tall and produce blooms as small as two inches and as large as six inches in diameter. Their appearance is said to be like a lollipop on a stick due to their straight stems topped with a bright-colored bloom. The flowers can be a single row of petals or a dome-shaped variety. They grow in a variety of colors depending on the species; Zinnia augustifolia has small orange blossoms and Zinnia peruviana grows red, purple, or yellow flowers. There are solid varieties and multi-colored plants. They attract butterflies and can be both an indoor and outdoor plant.

Zinnias can be started indoors by creating a seed compost mixed of equal parts of loam, peat, and perlite, and then placing it in a bowl or bucket and wetting it thoroughly. Place the compost in three to four inch biodegradable pots up to one inch below the rim. Plant two zinnia seeds per pot, and then cover with a half-inch of seed compost. Put the pots on a tray or cookie sheet and place by a window in a room with a temperature between sixty-five to seventy degrees, keeping the compost moist. The seeds will begin to germinate in seven to ten days.

When the seedlings are two to three inches tall and the threat of freeze has passed (maintaining a temperature of more than fifty degrees) they are ready to transplant. To prepare the plants for transplanting place the pots in a bucket or basin of water approximately one inch deep for thirty-five to forty minutes; this will help disintegrate the pots after planting. Choose a sunny area and cut the rim of the pots to soil level (to prevent water loss), and place the pots in a hole twice the width of the pot and to the depth of the pot one to three feet apart, depending on the variety. Be sure that the plant is vertical as you fill the soil around the zinnia and pat firmly around the seedling with your fingers.

Zinnias can be planted directly in the ground in milder climates when the temperature at night is fifty degrees or higher. Place a seed in a hole 1/16-inch deep, lightly covering the seed with soil, with seeds four to six inches apart, depending on the variety. Water the plants in the morning to be sure the soil is soaked but the water does not puddle and does not wet the leaves. Fertilize the area using slow-acting fertilizer that will last the entire growing season. To be sure to attract pollinators they can be planted in integrated flower beds.

Zinnias are a relatively easy plant to grow; they thrive in rich, well-drained soil but will do well in poorer soil that is fertilized monthly. Plants should be watered regularly with mulch for decoration and the soil must be kept moist. Remove dying blossoms to promote new growth and stake the larger varieties.

Zinnias are native to Mexico and are a hot weather plant that became popular in the 20th century. There are seven species according to the United States Department of Agriculture that contain a vast variety with colors ranging in the reds, yellows, and white and can be solid or multi-colored. They grow from miniature to large with blossoms that can be up to six inches in diameter. They can be used as indoor plants or in the garden for a variety of color and texture. They are great companion plants for vegetable gardens because they deter tomato worms and cucumber beetles and attract predatory insects like wasps and hover flies as well as hummingbirds that eat whiteflies.