The Benefits of Therapy Animals 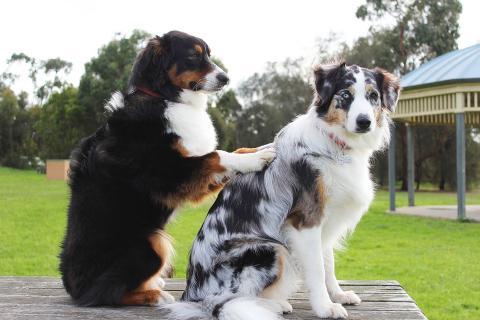 If you’ve recently spent any times traveling on planes and through airports, you might have seen dogs lying at their owner’s feet, secured with little more than a leash and a vest reading “Therapy Animal.” Therapy Animals have become popular in recent years: pigs at the San Francisco International Airport, donkeys at Montana State University during finals week, alpacas at Oregon hospitals, and even Daniel the Indian Runner duck on a flight. It might seem silly on the outset, but most of these animals are well-trained and certified as therapy animals, providing emotional support for traumatic events. If you currently suffer from high levels of anxiety, PTSD, or other trauma, it might be worth considering training your dog, or adopting another animal, as a therapy animal. Here are three reasons why these companions are much more than just a cute face to look at:

1. Petting an animal can reduce pain and anxiety.

A study published in 2013 looked at “The Science Behind Animal-Assisted Therapy,” finding increased endorphins after patients were visited by therapy dogs. Another article, published in the journal Anxiety, Stress & Coping found a significant decrease in anxiety after participants were told to pet or stroke an animal—whether or not they wanted to, or liked, the animal. Of special interest was the fact that the type of animal didn’t seemed to matter: “the anxiety-reducing effect of petting an animal applied to both the soft cuddly animals and the hard-shelled ones.” Reduced PTSD symptoms are also possible, as shown in this 2015 study on animal-assisted intervention.

2. Caring for an animal may ease depression.

Growing up, I had more than two-dozen animals—rabbits, guinea pigs, hamsters, gerbils, horses, cats, dogs, hermit crabs, lizards, and, because of the lizards, crickets. Our leopard-spotted gecko ate crickets that we raised in a separate tank. Over several weeks, the crickets escaped and started to breed throughout our house; we heard them in the walls, saw them on the stairs, and occasionally felt them spring from our couch. Unknowingly, these insects may have actually been improving our mental health—just as much as our dogs, cats, or more typical pets. A study published in Gerontology in 2015 found that elderly people who were given insects to care for showed improvements in depression and cognitive ability. This may have larger effects, applying to a wider sector of people, but the fact that caring for crickets, which are a very cost-effective and relatively easy pet to care for, bestows the same benefits is very positive.

3. Spending time around animals can increase social behavior and skills.

A 2013 study looked at the ability for animals to stimulate social interaction. By studying the interaction of children with autism who were given toys or guinea pigs to play with in a classroom setting, researchers were able to conclude that children with autism had positively improved their social interaction skills. The study states, “Participants with ASD demonstrated more social approach behaviors (including talking, looking at faces, and making tactile contact) and received more social approaches from their peers in the presence of animals compared to toys.” Another study, published in 2016, found that children asked to read to dogs demonstrated improved reading performance.

How to find a therapy animal:

Therapy animals are typically dogs, though, as mentioned at the beginning of this article, they can be other species, too. Therapy animals are privately owned, meaning that you can train your own dog to become your therapy animal. Beware, however: there are many fake certifications online. Therapy animals are generally broken down into Therapeutic Visitation, meaning that you bring your animal to hospitals, nursing homes, and other public facilities to let patients and guests spend time with your animal; Animal Assisted Therapy, which is generally described in the aforementioned points; and Facility Therapy, or animals that are brought into nursing homes to alleviate patients with mental illness or disease.

As the National Service Animal Registry states, Therapy Animals should:

Think that having a therapy animal, for your personal benefit or as part of volunteer work, is for you? Learn more here.