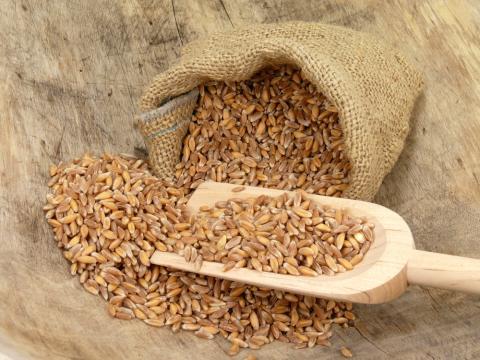 Farro is an ancient food of the people who lived in the Mediterranean basin. It fed the Roman army, was a biblical food, and is the national dish of Lebanon. Not only was it a staple but it was also a cure for many maladies. Farro was found to have first been cultivated in the Fertile Crescent of the Middle East 10,000 years ago. Its initial use was as the main ingredient in bread. It is also known as emmer and by the 20th century was replaced with durum wheat. Today it is a minor crop and is only grown in a few areas in Europe, but remains an important crop in Ethiopia. The grain of the plant is covered with a harder hull than most other wheats, which protects it from insects. Farro is closely related to spelt and einkorn wheat. The food is once again gaining in popularity because of its rich nutritional content. It is high in fiber, B-complex vitamins, minerals, simple and complex carbohydrates, and protein.

Farro has been used as a healing food for centuries.  One reason it’s a healing food is its high fiber content and another is that it has more protein than other wheat. It also retains its germ and bran because it is unprocessed. It is used as a grain in soups, salads, and desserts and in flour form for breads and pastas. It contains less gluten than other grains, making it a preferable substitute for other wheats. It is a small, light brown grain with an obvious bran and it has a chewy texture with a mild flavor. Farro is both cultivated and also grows wild to be harvested. It is a popular food in areas of Europe, Asia, and the Middle East. After it is harvested it is divided into three grades: long, medium, and cracked. It is advised to buy the whole grain and crack it in a food processor or coffee grinder to get the freshest results.

There are many health benefits from including farro in the diet.  Here are some of them:

1. For a healthy digestive system, farro has many qualities that aid digestion. It swells up in the digestive tract, aiding in the movement of the bowels, and prevents constipation, resulting in timely elimination of waste. Of the wheat grains, farro is the easiest to digest and has the least amount of wheat gluten, thus can be eaten by those who have an intolerance to gluten.

2. Farro is an excellent heart healthy food containing antioxidants called lignans. These substances reduce inflammation, lessen the incident of arterial plaque, and lower cholesterol levels. As a result of these processes the grain helps to lower blood pressure, making it an aid to reducing the risk of cardiovascular disease.

3. For vegetarians, farro is a good source of protein and B-vitamins. It provides quantities of protein comparable to beans and legumes and more than many whole grains. Eaten with vegetables, farro forms a complete protein which sustains many bodily functions. Its high content of B-vitamins provides energy by converting foods into carbohydrates, proteins and fats. It balances metabolism and aids in a healthy nervous system by maintaining normal neurotransmitter function. Vitamin B2 and other B-vitamins in farro are essential for development and a healthy reproductive system.

4. Farro has a high complex carbohydrate content, and its low glycemic index/load makes it an excellent food for those with diabetes. Because it aids the digestive process, the rapid emptying of the stomach increases starch digestion and reduces the absorption of glucose. It regulates the insulin levels, making it a preventative food for Type-2 diabetes.

5. For women approaching menopause it is recommended that farro be added to the diet. During this transition period when the body reduces the production of estrogen, farro provides phytoestrogen lignans – a substance that can transform into mammal estrogen by intestinal bacteria. As it contains lignans, farro alleviates the symptoms of hormone imbalance during premenopausal, menopausal, and postmenopausal periods, like hot flashes.

Since ancient times, farro has been used as a staple food and healing aid. Its popularity ebbed with the development of durum wheat but has gained favor since the late 20th century. Dietary and scientific finding of its rich nutritional value has put farro on the grocery shelves. It was once found only in specialty food stores but today farro can be found in supermarkets, ethnic food shops, and health food stores.