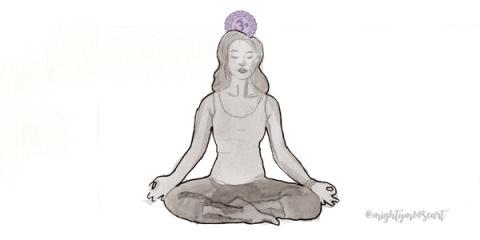 Babies usually enter the world head first, literally “crowning” as their final move from the fetal stage of development into the oxygen breathing world of humanhood. The Crown Chakra is found at the very top of the head and is the interface between the world of the unseen and this body. When the Crown chakra, also known as Sahasara, is fully open and activated it is seen as the Thousand-petaled Lotus and is rainbow colored, signifying that all of the lower centers are open and functioning. How do we help to activate this center, and what does it look like to own an awakened Crown Chakra?

In Tantra, the awakened Crown signifies the merging of the King and Queen, the Shiva and Shakti, the Masculine/Feminine, Sun/Moon aspects of self that are represented by the spinal channels of Pingala and Ida. These two energies of “Yin” and “Yang” actually meet in the third eye center at the Pineal Gland where they activate a higher consciousness in the person. From this, the Crown is then opened to allow for the expression of what happens when the inner marriage is complete.

The Crown signifies Unity, the dissolving of duality within the human psyche and the return to the remembrance of “All being One.” In this center, the Cosmic perspective is remembered and the Anandamaya Kosha – or Bliss body – is accessed. This is often felt as Nirvana, or a Blissful state that is beyond the normal functioning of the human mind, emotions and sense-experiences.

The fact that the Seventh Chakra is called the “Crown” and that we speak in these same terms for identifying royalty is no mistake. One who has awakened their Crown Center has remembered their Divinity, which is well beyond the Earthly status to which we refer when speaking of Kings and Queens. The true royalty exists within every person. We all have the Divine Birthright to remember who we are and claim the riches of the “Kingdom.” In Tantra this is the recognition that your own life and body is the portal and access point to your own Kingdom/Queendom and you need only lay claim to what is already yours in order to begin to experience life from a new level of blessing and Abundance.

How To Activate the Crown

The Sound of AUM

Eating a Balanced Rainbow Diet (all the colors present)

Crystals above the Head and on the Head

Sitting under a Waterfall

Lying on the Beach

The ability to see reality from the bigger picture just as easily as from the 3-D, duality point of view is natural territory for the awakened crown individual. The image I always get is that of the enlarged skull you often see in Egyptian hieroglyphs, which to me depicts one with their crown activated -- part “in the sky,” so to speak. It is like there is a piece of the self, an aspect of consciousness, and even part of your very own skull that is extended into other realms all of the time. Nothing presents itself to you without also showing its larger “cosmic” implications as equally relevant.

An awakened Crown does not mean that your head is always in the clouds about these cosmic visions, however. Though this may be true upon the earlier stages of purification, one with an awakened Crown center will be able to see how such Cosmic knowledge is usable, translatable and applicable in the physical world. In other words, it is not about becoming super “woo-woo” and speaking only about the Annunauki, energies in the universe and portals, but rather, being able to integrate this knowledge at an earthly level so it can be used by the self and the masses for evolution.

One with an awakened Crown has often been referred to as the Mystic, the Sage and the Rishi. The Sorcerers of old were those who had access to Source power and channeled it in through their crown for use in the material world. This power was greatly regarded in times passed; however, there have been those who have wielded this energy for deception and personal gain. Such is the open Crown without an awakened Heart Chakra, without an awakened high heart and without a purified throat chakra.

In this day and age we are learning to do the work and focus on the “end goal” which is the evolution of consciousness for personal and planetary enlightenment. Yes, there are “side effects” to the journey of awakening -- some even look like “super powers.” In days of old these powers were referred to as Siddhis. They are natural side effects of awakening the spinal centers, for they are natural evolutionary phases for these vehicles we walk around in. However, there are “dangers” in paying too much attention to the side effects and allowing them to deter you from the goal of evolution. This is what has happened to sorcerers who “went bad,” so to speak.

It is one thing to know, intellectually, about opening chakras in the body, and to strive to do so through various practices such as yoga and chanting. But when the body truly begins to take on its Divine form and to express as we have the capacity to express, the true questions which must be asked revolve around how prepared you have become to handle such capacity? How ready are you to embody your divinity and all that encompasses? And just as many do not expect – when inheriting large sums of money – where before they were kind-hearted and generous, but after the money the unresolved greeds and selfish behaviors become amplified, so with our spiritual abundance when fully accessed.

The Crown Chakra is the pinnacle of our evolutionary process within the body. Beyond the Crown we begin to stretch into our multidimensional form and access energy gateways that are beyond what we feel with flesh and bones. When we can open the Crown and leave the ego on the ground: this is the true test of Mastery. How Royal do you become when your Divinity is revealed to you? Do you bow in humility? Do you stand taller? Do you balk at your fellow human? Does compassion well up inside you? For upon opening the Crown we begin to truly see where each of our brothers and sisters sit on their inner thrones of self-worth and where we do, too.