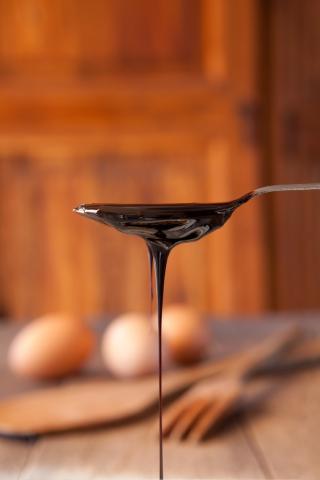 The production of molasses was developed in India in approximately 500 B.C.E.  Arab invaders brought the product to Spain, and a century later it came to the West Indies with Christopher Columbus. The British began cultivating sugar cane in Barbados in 1646, and by the end of the century molasses was a commodity. It is not clear when blackstrap molasses was first used for human consumption. Organic, unsulfured blackstrap molasses is one of the most inexpensive, readily available superfoods, rich in vitamins and minerals. It is a major healing and preventative food and is an excellent replacement for sugar. Blackstrap molasses is the waste product in the manufacturing of sugar and is more nutritious than organic unsulfured molasses.

It is quite ironic that the refined product of sugar is detrimental to health while the waste product is one of the healthiest and healing of the superfoods. During the refinement process, all of the vitamins and minerals naturally occurring in raw sugar are removed. The process of making organic, unsulfured blackstrap molasses begins with the harvesting of sun-ripened organic sugar cane – making sulfur additives unnecessary. Then machines extract the liquid from the cane, which is boiled and put into the centrifuge to extract the sugar crystals. The liquid resulting from this part of the process is molasses. The boiling process is repeated a third time, leaving the thick dark black residue that we know as blackstrap molasses.

This dark rich syrup is rich in vitamins and minerals and has a low glycemic index, which means that the body metabolizes the glucose and carbohydrates slowly, making less demands on the production of insulin in the body and therefore stabilizing blood sugar, reducing the risk of diabetes. It also contains a high level of iron, is a natural source of folate, folic acid and other B vitamins that are instrumental in the production of red blood cells, and thus reduces or eliminates the effects of anemia. Organic, unsulfured blackstrap molasses also contains significant amounts of calcium and magnesium, which aids in bone health, important for functioning of the nervous system and more than 300 metabolic processes. An abundant amount of potassium is also found in organic, unsulfured blackstrap molasses which can prevent heart disease, promote healthy muscle tissue and relieve or eliminate the threat of arthritis. There are a significant number of trace minerals in blackstrap molasses that are essential to a healthy body like manganese, zinc and copper.

Organic blackstrap molasses can be used as a sweetener in baked goods, added to cereals or made into a hot drink.