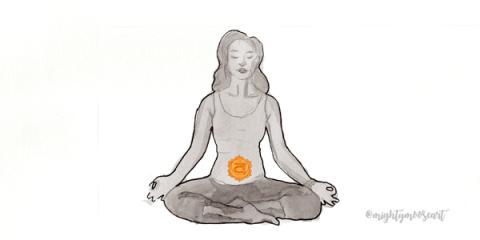 Much of society (and the world at large) has been struggling through first and second chakra issues for what seems like all of time. These are the “most difficult” passages for the kundalini shakti to work through in the consciousness of “lower” man, as these chakras deal with basic, primal, sexual and ancestral issues. The previous article in this series discussed the first chakra and what both an asleep and an awakened root chakra look like/act like. Now we will delve into the sacral center, Swadisthana, the center of sensuality and karma.

It is often said in yogic texts that the second chakra is the most difficult to “pass.” In other words, when Kundalini shakti starts its passage up the spine to cleanse and purify the vital centers, the second chakra issues of sexuality, satisfaction, and ancestral karma are the most challenging to work through and complete. For it is also said that when a person's kundalini passes through the gates of the second chakra and makes it to the third center in the naval, that it will not fall again to the lower centers. What this means is that if a person's consciousness can endure the second chakra initiations and purification, then they will ascend consciousness into a higher order and no longer be stuck “seeing things” through the lower senses of instinct, karma and pleasure. This does not mean that one does not have access to these things, but rather, they will not be bound by them, nor ruled by them.

The second chakra, Swadisthana, is located approximately two inches up from the tailbone and several centimeters inside the body from the physical sacrum. In some people, the location of the second chakra may be slightly lower than their root chakra, especially in women where the 1st chakra is found right outside the cervix in the location often referred to as the G-spot.

This center rules the reproductive organs and glands, the kidneys and the bladder. It is responsible for sexual impulses and the basic feeling of satisfaction, both in life and in sexuality. This center is also the keeper of ancestral karma, and being a “water” ruled center, it is often murky and dark prior to awakening, which is often experienced as a dark night of the soul due to the depth of issues and shadow qualities found here.

Having an awakened third eye center prior to the journey through a second chakra opening is vital. If one is unable to take an observer standpoint while cleansing and purifying the second chakra, it is not uncommon for depression, psychosis and dark nights to last too long and for the person to become “lost” in the process of working through the demons often uncovered in this center.

It is not only a few souls who have dark nights to journey; we all carry patterns and beliefs through the DNA from our ancestors that were left unprocessed in their lifetimes. For the most part, our ancestors were ill-equipped to deal with the emotions and conditioning of their day and have therefore left the task to us to transcend the consciousness they passed on to us.

When the second center begins to open and cleanse (the purification always occurs first), debris from our DNA will be thrown out into our field for us to deal with. For the majority of what most humans face in this process, I would say much of this debris is ancestral. It is good to know this going into the journey -- otherwise the practitioner is left questioning their sanity and wondering of their behavior, which is simply playing out for the benefit of clearing it.

Sexuality and Second Chakra
Second chakra issues are also highly sexually charged, and can lead one to either explore sexual deviance or to repress the desire to experiment sexually (which is a completely normal part of human evolution). Through a healthy attitude taught in one's youth in regards to sex and sexuality, much of the taboo behavior many must face around this center can be avoided or easily transcended with little effort.

Unfortunately the world’s second chakra has been largely blocked/closed, and is only now beginning to purge (in my opinion) and so much of what humanity has been taught around sex has been based on a shut down sacral center consciousness – resulting in repressed and distorted attitudes around sex and sexuality.

A person with an awakened sacral chakra will have processed ancestral patterns and personal issues surrounding sexuality and will find themselves to feel satisfied, both sexually and with what life has to offer them. In this center, when purified, one begins to interact with life and others in a more naturally sensual way. In other words, the senses are fully engaged without shame and personal exploration is neither with need for attention nor repression, but instead comes as a healthy and natural expression of rooted curiosity and self-love.

Love of self is a key emotion when one's second chakra is activated and open. In this center it is easy to question self-worth when the purification process begins and all manner of karma and debris are playing themselves out internally and in one's world, but upon clearing through these things and with an attitude of observation and detachment, the awakened second chakra person begins to enjoy life and all that is unfolding through them.

In the world today, much of the distorted display of sexuality is due to people living in closed second chakras, just as the money issues are due to closed root centers. As this reality cleanses itself, these issues will shift to where more people trust the process of life, the abundance that is rightfully part of existence, and that sexuality is a beautiful and sacred expression of being in human form and is meant for the purpose of co-creation in the myriad ways we as creator beings can imagine.

To assist in awakening the second chakra and purifying this vital center, it is important to work with the third eye center and to practice the art of observation – by way of “observing” your life, not only as a participant. It is also a good idea to journal the events you are experiencing, if you believe you are in a second chakra awakening, as well as get some support in the area of ancestral clearing. There are various modalities designed to assist one in releasing unprocessed karmic patterns and emotions, such as the Emotion Code technique I personally employ, as well as Yoga Nidra and other subconscious deconditioning practices.

Additionally, wearing the color orange as well as eating orange-colored foods supports the second chakra. Affirmations such as “I am satisfied sexually and in my life” and “I release all karmic patterning that no longer serves my authentic expression” are good places to start. Yoga postures such as forward fold (Uttanasana) and reclined knee-to-chest (Apanasana) are both great for working with this center. Herbs which support the reproductive organs and the kidney/bladder team are also helpful: Damiana, Cranberry, Corn Silk, Maca root and Uva Ursi, for example.

Watch this video for a guided meditation on awakening your second chakra:

Stay tuned for the next article on working with the third chakra, Manipura, as we make our way through the vital centers in the spine on your path of awakening!