Fresh And The City: The Farm to Families Initiative 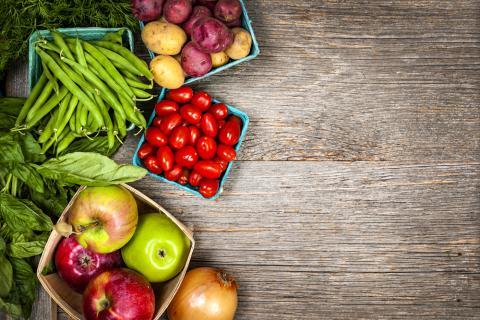 In 2011, I moved from the lush greenery of Olympia, an hour south of Seattle, to Philadelphia, one of the densest cities in America. Never in my life had I seen so much brick, so much pavement, and so little green space. I loved the city—I moved there to pursue opportunities that weren’t available in a smaller town. But I missed the green. And something about that made me suddenly interested in healthy eating. If I couldn’t have much green foliage around me, at least I could have some on my plate.

As a (rather stereotypical) college student, my diet had consisted of ramen and various combinations of cheese and starches. Although cheap, it was a pretty unsustainable way to keep myself alive in the long term. But when I started looking for other options, I realized just how difficult clean eating was going to be. Living in Philly, grocery stores were sparse compared to the population. And good, affordable grocery stores were even sparser. Since I was working for a minimum wage that was just over $7 an hour, healthy eating didn’t look like the most attainable goal.

For many people in other parts of the city, the struggle was even worse. In some of the densest and poorest parts of Philly, there are no grocery stores, only corner bodegas that help fill the gap but tend to have higher prices and minimal fresh produce. However, Philly is also a fairly progressive city. There are urban farms, like the celebrated Greensgrow, that show that farm-fresh local produce doesn’t have to just be a countryside thing. And from that same ethos came the Farm to Families (F2F) initiative, which provides access to fresh produce from local farms at highly discounted rates to anyone who needs it.

Since its beginning in 2010, F2F has made a massive impact on access to healthy food in the inner city. Farm to Families is operated through the Saint Christopher’s Foundation for Children, which also provides medical help to children and families in the area. Jamiliyah Foster, who works for Saint Christopher’s, shared the story of this project’s origins with me. “At the time, North Philly was pretty much a food desert. It’s a little better now. Doctors didn’t even really talk about diets with their patients here, because for what?” But now, there’s even a “Fresh RX” program, where the doctors will write prescriptions for the Farm to Families program for their patients.

Farm to Families is open to anyone who wants to participate. There are subsidized boxes for low-income individuals, but even the full-priced ones are a great deal compared to most grocery stores. I signed up for the weekly $10 box. At a grocery store, $10 might not go very far in the produce section. But with F2F, I was coming home to a lush fridge packed with whatever was in my box that week. What I got was always a surprise. Depending on what was in season, it could be anything from plantains to potatoes, apples to pineapples. I learned to use every part of the plant, like cooking the greens from carrots and beets. And even though I’m hardly a good cook, I was able to turn that $10 into pretty good meals with only a few additional ingredients, thanks to the suggested recipes F2F offered. There was even the option of adding on things like ethically produced cheese, beef, or eggs.

Although it began with one location, this is a quickly growing organization. “The ultimate goal is to have Farm to Families locations all over North Philly—so wherever you are, you can walk and get your produce,” says Foster. This would make a huge difference in many lives, as lack of time and transportation is a major obstacle in access to healthy food. And the impact the program has already had is measurable. “We have people who have lost weight and changed the way their whole family eats,” says Foster. “For me, the most interesting thing is the broadening of palettes. We’ve had cooking demos and things like that that have changed a lot of minds [about what people want to eat].”

The future of F2F goes beyond just expanding to new locations. Farm to Families is expanding both what they offer and the resources people can get through them. They now provide things like omelet boxes, seasonal boxes, and fruit boxes for those who want more specific items than just a mixed fruit and veggie box. That way, recipe planning becomes easy. “The population we’re catering to lacks a lot of resources,” Foster says. “Do they have a knife? A cutting board? Do they know how to cook these things? We want to find out what people need and then find ways to meet those needs.”

Farm to Families made me feel wealthy when I looked in my fridge, even if I didn’t feel that way when I looked in my bank account. I was a broke graduate student, and it made a world of difference. And for people with families, or living under the poverty line, whose financial crises are far more drastic than mine, that difference is even greater. In the age of expensive but alluring CSA programs, it’s incredible to see fresh, affordable, healthy options being made available to everyone in North Philly. “To me, that’s what makes it such an awesome program—there’s a level of dignity there,” says Foster. “You’re not standing in a line four blocks long. You’re buying the same box as everyone. The man next to you might make $300,000 a year and he’s eating the exact same food as you.”

As initiatives like Farm to Families gain recognition, I hope more will follow suit. Is there a similar program in your area? Tell us about it in the comments!

Author’s note: The author has no affiliation with Farm to Families beyond being a prior customer.

ALL ARTICLES BY Elyse Hauser