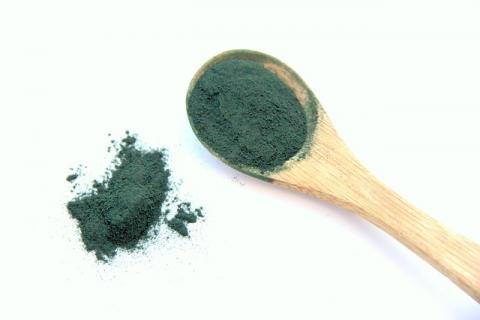 Spirulina is a blue-green algae growing in fresh water and is rich in protein, vitamins and minerals and has many health benefits.  Spirulina has been used by the Aztec people since before the Conquistadors. Cortez recorded its use in the 16th Century, stating that the people in the area that is now Mexico would sell brick like cakes of spirulina at the markets and would eat it like chunks of cheese.  It was also found to be cultivated by the people in the Lake Chad area of Africa in the 9th Century. It is also found in Hawaii, known as Hawaiian Spirulina Pacifica, and is considered to contain the most nutrition of any spirulina.

Spirulina earns its title as a ‘superfood’ because of its nutrient density and unique inherent healing power. Here are 4 reasons to add more spirulina to your diet:

1. One serving of spirulina (three grams) contains sixty percent protein, which makes it an excellent source of protein for vegetarians. It is a rich source of vitamins A, K and B12, manganese and chromium. It is richer in iron than spinach and has more beta-carotene than carrots. It also contains more antioxidants than blueberries.

2. Spirulina is effective in detoxifying the body of heavy metals – in particular, arsenic. According to the World Health Organization, the United States joins many countries with the problem of arsenic poising. Arsenic is present in the water and studies from Bangladesh have proven that a combination of spirulina and zinc reversed the effects of arsenic in a substantial number of individuals.

3. In the prevention of cancer, spirulina has been found an effective addition to the diet. When tested on human pancreatic cancer cells researchers have documented significant reduction in the development of various cancers. Studies at the University of Maryland Medical Center found that spirulina increases the production of antibodies that help improve the body’s immune system which helps to protect it from chronic illnesses like cancer.

4. Spirulina is found to lower blood pressure, reduce cholesterol levels and boost energy levels. It also helps to reduce weight because adding it to a recipe will make the dish more filling. It alleviates allergies caused by inflammation of the sinuses due to its anti-inflammatory properties.

Spirulina can be harmful if taking certain pharmaceuticals. According to the National Institute of Health, it can also worsen the diseases related to an overactive immune system. They also advise not to take spirulina with pharmaceuticals and herbs that slow blood clotting such as cloves, danshen, garlic, ginger, ginkgo, ginseng and turmeric, as this may cause a risk of bleeding.

There are many ways to add spirulina to the diet by adding it to smoothies, juices and salad dressing.

4.         The dressing can be served on the side or added to the salad before serving.