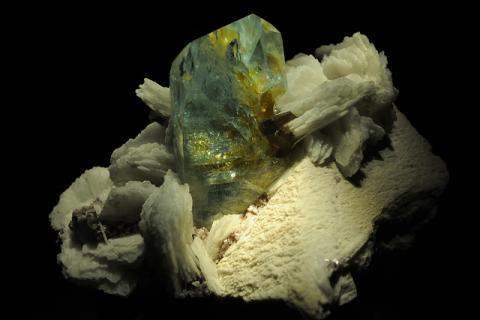 What star sign were you born under? What effect does it have on your life, if any? As the sun has recently moved into the constellation of Sagittarius, a peek at the gemstone of the month will shed a bit of light on both the energy available within this slice of the zodiac as well as on the people born during the archer's arrows.

A Bit of History

There is much debate on which stones are the “official” birthstones for each month. In fact, the stones have changed numerous times over the years. I am attempting, with this series, to reach as far back into the story line as possible and focus on the 12 gemstones that were thought to be the guiding lights of the zodiac. These are the original stones on what was known to be the breast plate of Aaron in Biblical lore, those which correlated to the 12 constellations of the zodiac and helped to enhance the energies of each phase of the heavenly body's expression the most – through the human form. The 12 original “birth stones” were also symbolic for the “12 tribes of Israel” and have mystical and physical significance for the foundation of one's spiritual and physical life. For those born during the month of Sagittarius, we have the Topaz, in both golden and blue hues, to highlight its presence in both November and December.

Where Did Topaz Get its Name?

The word Topaz comes from the Greek name for an island in the Red Sea called Topazios. Sounds mystical already, doesn't it? Though it was Peridot, and not Topaz, which was actually discovered on Topazios, the name stuck with this beautiful treasure. The name Topaz has also been dissected from its probable Sanskrit origin which means “fire” - given the fire of the golden Topaz and its yellow light. Golden Topaz is the stone of the November side of Sagittarius and ignites the fire of passion in the person wearing it. The Egyptians highly prized the Golden Topaz and thought it was given to them directly by the sun god Ra. They believed wearing it would give them direct contact and inspiration from Ra and open their minds to information beyond the earth plane.

Royal Benefits of Body and Spirit

In the body, the yellow/golden hue supports the digestive system, the lymph and the third chakra, Manipura, which is associated with one's personal power, motivation and creative drive/expression. I once dated a Lord of Scotland who wore a giant Golden Topaz either on the belt of his kilt or over his shoulder. He told me it was the prized gem of Scotland, meant to inspire greatness.

By wearing Topaz of the golden shade, you are encouraging personal empowerment, creativity and authentic expression, sparked to remember and embrace your royal heritage.  This stone gives you the opportunity to tune into your divine royal expression, inherent in each person. Because intention is greatly amplified with the use of this stone, simply carrying it around while imagining the life you wish to lead can affect your field in a positive way, attracting that which you envision to you.

Golden Topaz is thought to be age defying as it assists in the regeneration of bodily tissues. The metabolism and thyroid are supported by both blue and golden hues and both shades are found to help balance the emotional body and help one find equilibrium and serenity within - beautiful traits for the spiritual aspirant.

The golden hue of the yellow Topaz correlates with the browns and tans of autumn and reflect the warmth of the sun which longs to stay both in the day and in the consciousness of humanity as the seasons shift toward winter months. When the calendar leans toward Solstice, the Blue Topaz takes the scene, offering gifts of vocalization and the ability to speak and sing with passion and forthrightness as is the gift of the blue hue.

To further expand on the idea of the 12 tribes of Israel, for which the original breastplate of Aaron was thought to represent and connect to, let's look at it a bit deeper.  In metaphysical circles the 12 tribes symbolize the 12 cranial nerves in the head. By gaining “control” of these nerves, or rather, turning them completely over to Divine will, rather than be ruled by them, the “lost” tribes return and the “promised land” of awareness and enlightenment is discovered within. In the case of the 12 stones found in the mystical breastplate, Topaz was found to be one of the 12, which must point to its ability to activate and turn at least one of the main cranial nerves so it functions on a higher octave of consciousness.

In the quest for both the literal and metaphorical “promised land” every soul is magnetized toward those people and experiences alchemically designed to bring about the initiations leading to such transformational events. One's personal promised land is both unique to each person, and yet exactly alike – it is the heaven, nirvana and Shambhala we all seek to find where dross from the lower mind is transcended and the true light of awareness reigns.

To reach for Topaz, in any shade, is to ask for an energetic boost, an alignment with such a mystical place. It is the intention to remember and experience what I believe is the birthright of every being. Topaz helps to bring the mind into focus and to release that which would keep it from finding heaven. In a very literal way, the use of the 12 birthstones are meant to activate Divine connection within and help the wearer to “unplug” from the illusory world of the senses in order to find God again. (God, in this case, being the light of one's own consciousness discovered in the center of the brain during meditation).

Influence of Jupiter and the Pineal

Topaz, no matter the color, has been known to support the mind, the intellect and the third eye, helping to ward off evil intent and allow the wearer to tune in to deeper wisdoms and truths. In Rome, Topaz was thought to have been ruled by Jupiter, the largest planet, and therefore symbolic of abundance and expansion. Jupiter is also the ruling planet of Sagittarius for which this stone resonates, and is therefore the stone of travel, higher learning, gurus and teachers, reaching for the stars and holding intentions that reach beyond the mundane.

Wearing Topaz can thereby assist in meditation – the kind that helps to focus intent and turn awareness toward the center of the head where true realizations happen. It is through contacting and activating the pineal gland, the holy of holies in the center of the brain, that one gains the ability to “travel beyond this world” and receive awarenesses which those bound to the senses are unable to reach. Blue and Golden Topaz are thought to be mystical tools to help in the process of transcendence.

Blue Topaz has often been called December's Birthstone along with other blue stones such as Turquoise and Blue Zircon and most recently, the gorgeously rare blue Tanzanite from Tanzania, Africa. But Topaz, energetically, speaks most strongly to the entire vibration of Sagittarius and can thereby support you where your chart reads the same. Just like fiery Sagittarius, who is quick to start new endeavors and bold in expression and wit, Topaz encourages these traits in the user. It is said that one who is born under this star sign will benefit most from the use of Topaz since the energies are so aligned. It is even more beneficial to wear Topaz as a Sagittarian during the month of Sagittarius for these reasons.

Ancient myths and legends of Topaz include the ability to become invisible with its assistance as well as increased strength and assured success.  To become “invisible,” to me, also simply means to become transparent in both intention and belief. One who is transparent becomes magically vulnerable to the point of inviting forward that which is heart-fully sought.  Topaz has other magical powers as well, such as the ability to supposedly change colors in the presence of something poisonous - not a bad thing to keep around if envy is an issue.

Success granted by Topaz is thought to come about due to its knack for sharpening intuition, enhancing creativity, and refining the intellect in so much that the vibration of wealth comes easily. Though qualities of the mind are most sharpened with the use of Blue Topaz, it is Golden Topaz that seems to attract wealth and prosperity most readily. It wouldn't hurt to keep both varieties around in the interest of abundance for both are of the frequency of wealth, dear to Lakshmi, resonant with gold, reflective of the power of the sun itself.

In shades of gold, in shades of blue, Sagittarius people will find Topaz to be a powerful ally for increasing connection with soul truths, strengthening the body, healing any discord and simply finding peace and happiness within. If you are not a Sagittarius sun sign, you still have this constellation ruling at least one house in your zodiac, if not other planets as well. Find out where Sagittarius most influences you and then concentrate the energies of Topaz toward enhancing this area of your life. It can support you in moving forward with the light of the sun, the warmth of courage, and the taste of transparent creation this stone so gracefully offers.

For more about birthstones visit us next month and during the month of your birth!

Thanks ~ and get transparent with Topaz this season! Your gifts are golden!!

Photo Credit: "Topaz & Albite" by Ed Uthman is licensed under CC BY 2.0