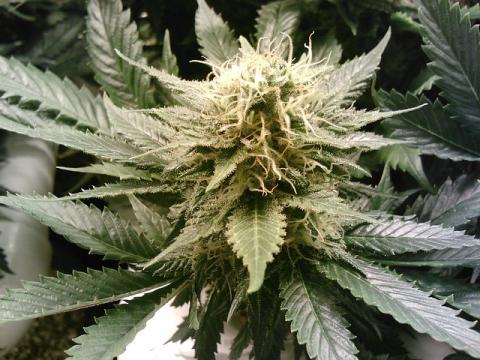 There are currently 25 states that have legalized the use of medical marijuana. Regulations and restrictions vary from state to state.

Marijuana is a flowering plant that contains 3 species/subspecies. There is the Cannabis sativa, Cannabis indica, and Cannabis ruderalis. It is interesting because the sativa and indica are both unique in their own way and totally opposite from each other. The ruderalis is also different from each of the other 2 strains in its own way: it is a little more resistant to the climate and environment making it a stronger and hardier plant but the amount of Tetrahydrocannabinol (THC) is much lower in ruderalis than its sativa and indica counterparts.

Tetrahydrocannabinol (THC) and Cannabidiols (CBD) are the actual medicine that comes from the plant. The cannabis flowers secrete the CBD and THC and that is where the magical medicine comes from. Our bodies naturally produce a compound called endocannabinoids – Sound familiar? This compound is activated inside of our body in order to maintain and continuously stabilize our overall health in many ways.

Endocannabinoids are considered to be very important and crucial parts of our bodies physiological system. Basically endocannabinoids are responsible for the maintenance and upkeep of our overall health. They are found all throughout our entire body including our brain, organs, immune cells, connective tissues, and glands just to name a few. CBD effects each part of the body in a different manner.

Even though medical marijuana still seems relatively new to a lot of people, the plant and its medicinal uses go so far back that they predate the Bible. There are several timelines available and they all claim that somewhere between the years 2900 BC and 1599 AD the use of marijuana was used to cure and heal many ailments. I’m not going to take you back that far -- we are going to start in 1850.

In 1850 marijuana was first added to the United States Pharmacopeia and with it came a list of the plant’s uses and an extensive list of the ailments it healed or relieved. It was used for little things like nausea and stomachaches, as well as big things like its use to battle opiate addiction and alcoholism. Just a year later in 1851 medicinal tinctures using marijuana were patented and sold in drug stores all over the United States.

Things continued on in a rather positive way for cannabis and its use in the healing world for 61 years before the first U.S. state prohibited the use of marijuana. In 1911 Massachusetts became the first state to outlaw cannabis, and soon after many prohibition laws began to be written. In the early 1930s you could still find tincture bottles at the pharmacy. The tinctures were produced by different companies like Park-Davis, Eli Lily, and Grimault & Co. Grimault actually marketed marijuana cigarettes to treat asthma.

By 1936 Cannabis was wiped off of the pharmacy shelves and it was no longer legally prescribed to anyone for anything. Eighty years later, it is 2016 and there are currently 25 states within the United States that have legalized the use of medical marijuana. Each state has its own set of guidelines, rules, and restrictions. If you look at the restrictions in New York, they are very strict and only people dealing with serious medical conditions like epilepsy or cancer can be prescribed cannabis, whereas California’s regulations are more inclusive, and can be prescribed for milder issues like headaches and nausea.

Cannabis has come a long way in many different senses and it has also revived old medical history. There are now several different forms of medical cannabis. In the past, you would only find tinctures or cigarettes at the pharmacy. Here are the 4 different forms:

Today in the medical world various cannabis strains are used to treat different ailments and conditions. THC is typically used to treat epilepsy, asthma, Autoimmune Disease, cancer symptoms, and issues related to HIV/AIDS. CBD’s are used as pain relief, an appetite stimulant, stress and anxiety reduction, and contain anti-inflammatory properties. Studies are still being done in other areas of health and cannabis. This list of ailments and conditions is a short version because cannabis is used for so many conditions.

This list will also include the year it became legal.

As the number of states that legalize the use of medical marijuana rises, so do the studies that provide the medical results. There is a strain of marijuana called Charlotte’s Web, named after a little girl whose mother began using medicinal cannabis to treat her Dravet’s Syndrome. Charlotte was having 50 – 100 convulsive seizures a week and after the use of marijuana she now only has 2-3 nocturnal convulsions a month.

George Washington grew fields of industrial hemp when he was in office. Hemp differs from Cannabis in the sense that it does not contain THC or CBD at all. Hemp is used for many things currently.