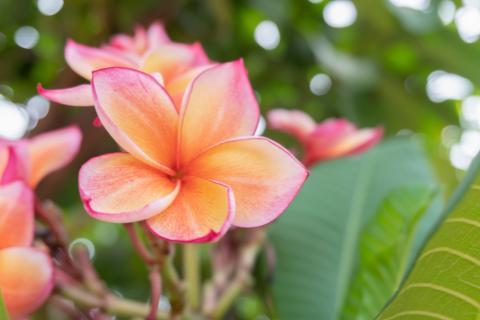 Plumeria are a member of the family Apocynaceae or Dogbane family of the genus Plumeria L. or plumeria P. The United States Department of Agriculture (USDA) does not list any species for the genus. Though it is commonly thought that the plant is native to Hawaii, DNA testing has proven that its origin is in the southern forests of Mexico. It was first discovered by Francisco De Mendoza, a Spanish priest sent to the New World in the 16th century to find medicinal plants and how the Aztec people used them. The plant was named in the 17th century after the French monk Charles Plumier who also documented New World plants. The other popular name for the plant is frangipani, after the 16th century Italian nobleman Marquis Frangipani who wore scented gloves (the aroma of the plant reminded many of him). Plumeria was brought to Hawaii by German physician Wilhelm Hillebrand in 1860.

Plumeria grow in shrubs that umbrella out with branches emanating from the trunk and crowned with many fragrant and colorful flowers. The blooms mature to a diameter of two to three inches growing from the cylindrical base that can be four to ten inches in length. The plant will mature to a height of twenty to twenty-five feet. The bark of the plant is scaled, formed by semi-circular leaf marks when they fall from the tree, and has a green/gray hue. Its gnarled branches appear swollen and are tipped with clusters of leaves that are dark green on top and lighter green underneath. Its sticky sap is poisonous to all animals—which includes humans.

Plumeria is used as a healing herb in many tropical countries. Its properties make it an anti-inflammatory that relieves the swelling of insect bites. It is a treatment for diabetes, aids in a healthy digestive system, and eases the effects of ulcers. The leaves are used to treat tooth decay, eliminate moles, and cure warts. They are also used to treat skin diseases and smooth cracked foot skin.  The flowers reduce the risk of developing rheumatism, heal fever, and cure constipation.

How To Grow Plumeria

Plumeria can be grown from seed or cuttings. When growing from seed the color depends on the parent plant and it will take approximately three years to bloom. Start the seed in a well-draining pot that is filled with one-third potting soil and two-thirds perlite to prevent root rot. Place the seed wing tip above the soil so that half of the seed is below the surface. Water the soil to saturation then re-water only when the soil dries and place the pot in full to half a day of sunlight. In approximately fourteen to twenty-one days the seeds will germinate.

When growing from cuttings it will produce the same color flowers as the parent plant and will bloom in about one year. Place the cutting in a one-gallon pot containing one-third potting soil and two-thirds perlite for drainage. The cutting should be one to two feet in length and before placing in the soil apply a rooting hormone to the bottom of the cutting to promote healthy root growth. Place the cutting three inches into the soil, place in a sunny area, and saturate the soil with water.

Because plumeria are tropical plants they make a good container plant for cool climates. They can be placed outdoors during the warm months then brought indoors for the cold season.