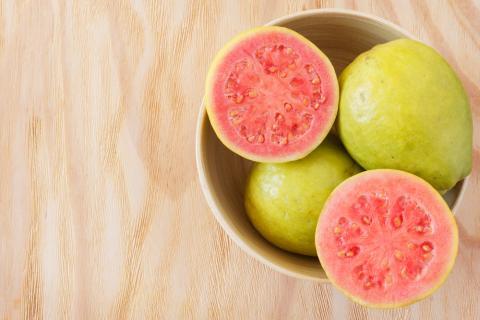 Guava is a member of the family Myrtaceae, commonly known as the Myrtle family of the genus Psidium L. or guava P, containing the species Psidium guajava L. or guava P. The plant is thought to be native to Mexico and Central America but it is not certain because of the widespread and longtime seed disbursement by man and animals.

The plant was introduced to Hawaii in the early 19th century and came to Florida in 1847 where it became a commercial crop in 1912 in Palma Sola. Guava was brought to the East Indies and Guam by Spanish and Portuguese settlers.

It can be found today throughout the tropical climates of the world growing wild; in many parts of the world and in some locations it is designated as a noxious weed subject to eradication. Guava is used as an ingredient in many recipes and it is rich in nutrients.

Guava grows on a small tree that matures to approximately thirty-three feet in height and has smooth, thin, flakey bark that has a copper tone with a green under layer.

The leaves are coniferous and aromatic when crushed and grow opposing with a short petiole having an oval or oblong shape; they are two to six inches in width and one to two inches in length. These leaves are wide and leathery in texture and have a downy underside.

The blooms are white, growing either as a single flower or in clusters and have a subdued fragrance.

The fruit has a strong, sweet, and musky aroma and can be round, oval, or pear-shaped; it matures from two to four inches in length and has a pale yellow skin with tinges of pink. The inner skin or rind has a granular texture that can be white, yellow, deep pink, or red and is sweet and juicy. The central flesh is darker in color and juicy, and it contains many yellow colored seeds.

Guava is rich in vitamins that include A, B1 (thiamin), B2 (riboflavin), B3 (niacin), B4 (adenine or choline). The fruit also contains calcium, phosphorous, and iron and it is low in calories, as one piece of fruit has from thirty-six to fifty calories depending on the size. Other beneficial substances found in guava are proteins, fat, and crude fiber.

Other vitamins found in guava are vitamin C or ascorbic acid which is essential for maintaining and strengthening body tissue by acting as a catalyst to produce collagen. Vitamin C is a major factor in preventing the development of cancer by strengthening the immune system. Also present in guava is vitamin B9 (folic acid), which is important for a healthy circulatory system and preventing cardiovascular disease and anemia. Folic acid aids in the development of the fetal nervous system, resulting in its healthy growth.

There are several health benefits to adding guava to the diet. Because it contains vitamin A, the fruit maintains a healthy ocular system, preventing the development of macular degeneration, cataracts, and reversing the degradation of ocular tissue. It is also rich in astringents which aids in oral health by maintain strong gum tissue and inhibiting the growth of microbes.

Guava is a tropical tree that is easily grown in gardens in warmer climates and does well in containers in colder climates. It is a small tree with more than 100 varieties, each having a unique flavor and appearance.

The plant can be started from seed or cuttings in warmer climates. If you start the guava from seeds in the fruit, you must wash them in soft, tepid water and dry them for a few hours; then let them soak in warm water for three to four hours. Then sprinkle the seeds in a prepared pot of soil and place in a warm sunny place; to speed-up the germination a clear plastic bag can be placed over the pot. Once the plant is established, place in the garden in warmer climates or in a three gallon or larger container that drains well.

How To Eat Guava

Guava is an ingredient in many recipes and is a versatile food. It can be eaten out of the peel, used in salads, and makes a delicious dessert. It can be juiced, made into pudding, or prepared as a syrup. Other recipes that use guava are pies, cakes, sauces, jams, chutney, catsup, and relish.