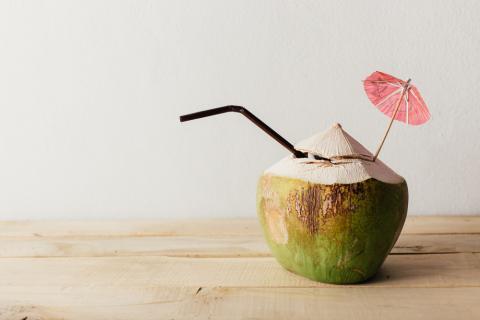 Coconut water comes from the immature fruit of the coconut palm. The coconut palm is a member of the family Arecaceae or Palm family of the genus Cocos L., commonly known as coconut palm P, containing the species Cocos nucifera L. or coconut palm P. The tree has its origins in the region known as Indian Malay.

Coconuts were used in India for more than 3000 years where they are regarded as a sacred fruit. The name in Sanskrit is Kalpa-Vriksha, “eternal tree” or “tree which fulfills all wishes,” because all of the tree is used. The tree was brought to Africa in the 15th century and the fruit was then introduced in Europe. Today the tree can be found growing in tropical climates throughout the world. Coconut is rich in minerals and has many health benefits. It lends itself to many recipes like juices, entrees, and desserts.

Coconut water is the clear liquid found in immature coconuts. The outside hull is still green and inside is a white shell that will harden and darken with age. This is filled with the liquid we know as coconut water, contained in gelatinous matter that will absorb the coconut water and develop into the mature coconut flesh. In stores it often looks like a white container with a pointed top wrapped in plastic to keep it fresh.

Rich in nutrients, coconut water contains vitamins B1 (thiamin), B2 (riboflavin), B3 (niacin), B5 (pantothenic acid), B6 (pyridoxine), B9 (folic acid), and C. These minerals are also found in coconut water: sodium, potassium, calcium, copper, iron, magnesium, zinc, and manganese. To add to the list of beneficial nutrients are the hypo nutrients that include auxin (gibberellin) cytokines and lutein-zeaxanthin.

Coconut water has many health benefits. For casual athletes it is a natural electrolyte drink due to its high potassium and low sugar content and is a good replacement for commercial sport drinks. Potassium also is a factor in regulating blood pressure, reducing the risk of developing cardiovascular diseases. The electrolytes found in coconut water help the body to detoxify by keeping the body hydrated and taking stress from the liver and kidneys. The calcium and magnesium found in coconut water reduces stress on the muscular system, too.

Other health benefits of coconut water include supporting a healthy digestive system. It is effective in treating gastrointestinal maladies like mild diarrhea, vomiting, dysentery, dyspepsia, and flatulence. It is used in the treatment of cholera, defends the body against free radicals, and is used to heal wounds.

There is a difference between coconut water and coconut milk. As mentioned earlier, coconut water is the clear liquid contained in immature coconuts. It is rich in nutrients and is a sterile solution free of contaminants, thus it’s no threat to health and is safe for children. It is a natural electrolyte keeping the body hydrated.

Coconut milk is made from the meat of the mature coconut that is grated then covered with boiled water and drained then set to cool. The milk is then squeezed out and, unlike coconut water, has a high fat content and is primarily used for cooking.