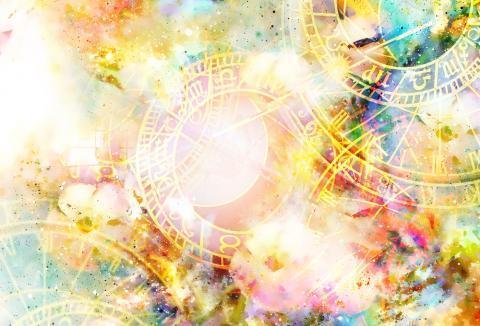 Planetary Transits & Cosmic Interplay for the week of Oct 21–27

This week we have the Sun and Venus coming conjunct to the exact degree while in the sign of Scorpio.   Conjunctions are always at their peak when sharing the same degree in a sign.  Now, they will always give their effects while in the same sign, but to a lesser degree as the distance between them increases.  It is at this time that the fullest of their effects will be experienced.  Enough about this generality, let’s look at the specifics of this indication.

Sun and Venus in Vedic Astrology are considered to be mutual enemies and so their combination is not one that harmonizes and helps each planet achieve its ends, but quite the opposite.  Each disrupts the other’s natural agenda and prohibits it from expressing its energies naturally and with ease.  When this happens, a planet is said to be afflicted.  But with Venus and Sun it is what I call a “nice affliction.”  There are a couple of levels to this.

The Sun, Sacrifice, & The Greater Good

First, let’s explore the nature of the Sun.  The Sun’s natural agenda is to help people to bring about their inherent greatness and radiance of their being in its most glorious manifestation.  What this looks like in more practical terms is for one to follow their ambitions and highest goals in life.  The thing about following this path is that it generally requires one to sacrifice the things that get in the way of achieving this end.  At times one may come to a fork in the road in life in which they have to choose only one direction to move forward.  At these junctures, often times there are multiple sources (like that of one’s family, for example) that want them to go in a direction that is not in alignment with that of their personal ambitions.  The solar energy is that which helps people to not listen to those outside influences and to just proceed in their own direction.

There are a couple of things to be understood about the Sun from this previous example.  Firstly, this idea of sacrifice is a big part of why the Sun is considered to be a cruel planet. It gives people the energy to sacrifice the things that are holding them back or just not in line with their personal agenda.  Now, this sacrifice isn’t necessarily a positive situation to go through for the other parties involved.  The sacrificed parties can be thrown to the side, ignored, or left behind since they don’t fit into the individual’s plan for life.

The other part to understand about the Sun is that this cruel nature of sacrifice is for what the person wants to do that they believe is for the greater good.  It’s not that they’re casting things or people away from them just for the sake of doing so or just to be cruel.  The Sun represents purification and this process, even though it is cruel in nature, is done ultimately for greater benefit.  Think of a king—he can’t make everyone happy and ultimately the decisions he makes will hurt some, but ultimately his priority is about the kingdom as a whole and making sure it flourishes.

Venus: The Planet of Diplomacy

With this previous description of the Sun in mind, it will quickly become apparent of what to expect of the combination of Sun and Venus as we look further into Venus.  Venus is the planet of diplomacy and making sure everyone gets a fair share, which is the polar opposite of the Sun’s energy.  Using the previous example, instead of the king making decisions solely based upon what he believes is the right thing to do for the kingdom, he will actually poll all the people in the kingdom and try to take measures that help everybody.  In fact, Venus is representative more so of democracy and congress than it is of a monarchy.

Venus, being the planet of valuation, brings about the energy of understanding that equal exchange is important and being aware of how to make this happen with all parties benefiting.  Nobody gets cast aside and everyone gets an opportunity.  If one were to come to a fork in the path through life, they wouldn’t look to continue on a path that just takes them to where they want to go, they will choose a path that makes everyone happy.  The key to Venus is that it doesn’t necessarily sacrifice its own needs in this process.  It’s about helping one to get what they want while also making sure the parties involved are taken care of too.  This is what is meant by Venus being the planet of diplomacy.

Now, with this conjunction of Sun and Venus we can see where this balance becomes lost.  This represents times where one is struggling between what they want to do and what the influence of other outside sources want of them.  Sometimes this can just be a perception by the individual, who believes that others want more but is not necessarily in line with what the others actually are expecting or asking of them.  The key here is that one is experiencing this pressure and faced with this fork in the road, so to speak.

To put it in a more practical context, this can be a time when one’s spouse may be complaining to them that they never spend enough time with them because they are always working.  Again, this could also be a perception issue where, for example, one doesn’t accept a promotion that they always wanted because they believe that their spouse might not want them to do it.

Now, it doesn’t necessarily have to just be about one’s romantic partner, either, and can just apply to people in general.  For instance, this can be a time of one facing the struggle of stepping into their own power like changing careers or acknowledging one’s sexuality because of concern about others’ perceptions about them.

The previous examples are more about the Sun being hindered by Venus, and since this is a two-way street of hindrance, let’s look at the influence of Sun to Venus.  This can be a time where one’s spouse may be taking that position that they desire that takes them away from their relationship without consulting them.  The key here is equal portioning being thrown out because another person is placing their needs before the group’s.  This can also indicate ego clashes in a work setting, where one person is trying to be seen above others.

Another consideration for this time is that it can be a time of all work and no play.  This can be a time where one doesn’t take the time to enjoy the pleasures of life (Venus) because their bigger career pursuits and obligations feel like they need all of one’s attention (Sun).  This can be a time where one stays up late writing astrology articles while their wife is telling them to come to bed and spend time with her.  Oh wait…Sorry!  Gotta go.  But just make sure during this time to breathe through it and do the best to consider all sides before taking action in one direction—you can’t always please everyone.