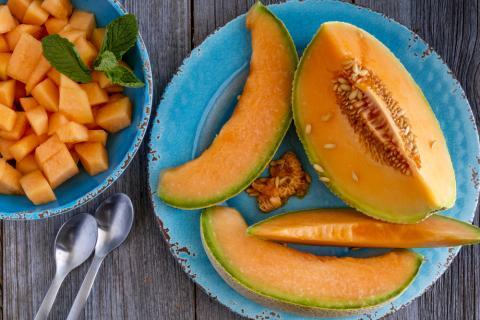 Cantaloupe is a member of the family Cucurbitaceae, commonly known as the Cucumber family of the genus Cucumis L. or melon P. and contains eight species. It is said that cantaloupe originated in either Persia, Afghanistan, or Armenia. It is known that the Egyptians cultivated the plant in 2400 B.C.E. Records state that the melon was eaten by Gilgamesh in 2000 B.C.E.; the Jews ate it as they wandered the desert; and between 200 to 100 B.C.E. the melon seeds were eaten by the Chinese. The Greeks not only ate melons but used them for medicinal purposes and the Romans introduced the fruit to Europe. The Spanish cultivated cantaloupe in the 15th century and Christopher Columbus brought the seeds of the plant to Haiti in 1493. Cantaloupe found its way to South and Central America and by the 17th century they were growing along the eastern seaboard of what is now the United States. The Navaho people began cultivating the crop in the American Southwest in the mid-19th century. Cantaloupe is easily grown in a backyard garden.

The cantaloupe that is marketed in the United States is really muskmelon. The outer skin of the muskmelon has a rough, symmetrical pattern known as netting, with deep groves that run from end to end known as ribbing. True cantaloupe does not have the netting and has deeper ribbing. But for this article we will talk about the cantaloupe we find in American stores. Cantaloupe contains an orange flesh that has a sweet flavor and the size of the melon depends on the climate in which it is grown.

Cantaloupe makes a refreshing summer snack and is delicious as an ingredient in salads. They are rich in vitamins and nutrients that help the body ward off diseases and maintain normal function.

Cantaloupe is rich in nutrients. Its vitamin content includes A, C, and K, as well as thiamine, niacin, and folate. It is a good source of potassium and magnesium and also contains fiber. The vitamins C and A are found in the form of carotenoids. Containing antioxidants like carotenoids, cantaloupe reduces inflammation and removes the free radicals formed in the metabolic process. This helps to reduce the risk of developing cancer and inflammatory diseases, slow down the aging process, and reduce the risk of developing heart disease.

The significant amount of potassium in cantaloupe results in the maintenance of the muscular and cardiovascular system. Potassium relaxes the blood vessels, ensuring an even blood flow to the body and maintaining a healthy blood flow, resulting in quicker muscle reaction.

When purchasing cantaloupe there are some tips to assure a ripe sweet melon. The skin should be free of cracks and areas of discoloration and there should be no color seeping through the webbing or white skin under the webbing. A heavy melon for its size means that it contains a high amount of water and sugar which means that it is sweet and juicy. The “thump test” is another good indication of a ripe cantaloupe—when tapping the melon it should sound hollow. Finally, the melon should smell fresh and fruity.

Growing Cantaloupe in the Garden

Adding cantaloupe to the garden assures a continuous supply of the fruit for the entire summer with a taste much richer than that of store bought cantaloupe. The main ingredients are sunlight, heat, and moisture. This combination is obtained by using a black ground cover; it also keeps the melons clean and disease-free. The bed should be well fertilized and space the plants thirty-six to forty-two inches apart (or if using a trellis they can be planted twelve inches apart). Be sure to water often and cover the plants with a light cover to protect them from insects. In colder climates, the melons will begin to appear about fifty days after the last frost.