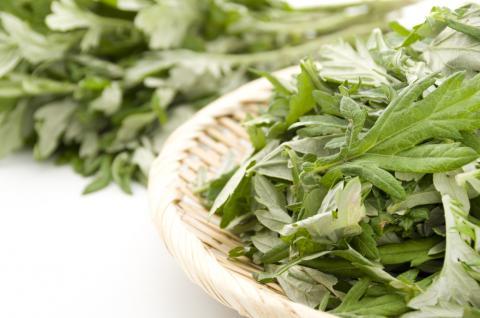 Mugwort (Artemesia vulgaris and A. douglasiana) has a magical feel to it: The silvery green leaves that shine in the moonlight; the distinctive scent used for dream time. Then there’s the botanical name “Artemesia,” for Artemis with her silver bow and arrow, goddess of the hunt associated with the moon and things wild. Mugwort seems to put one into a different space.

As far as the common name, mugwort, there are different ideas as to its origins.  One view is that the name derives from “mougthe” (moth), reflecting the plant’s use as a moth repellent. The other is that the name is based on “mug,” because mugwort was commonly used as a bittering agent in beer-making before hops became popular.  “Wort” simply means “herb.”

I like having mugwort growing in my little balcony garden—mostly just to look at, smell and generally hang out with it.  But mugwort can be used for much more than magical company…

The aromatics of mugwort are responsible for the dream effects.  Sticking some freshly dried leaves in some muslin and putting this in your pillowcase will do it. For the aromatherapy geeks out there: Mugwort contains dozens of individual essential oil components, including camphor, α - thujone, camphene and 1,8-cineaol.  The presence of thujone, a neurotoxin, means that using the purified essential oil isn’t a great idea. Use the leaves for sniffing, where thujone levels are low enough to not be a problem when used short term.

Mugwort is both a bitter and aromatic digestive remedy. The bitter properties stimulate digestive secretions, improving food breakdown and nutrient absorption. This translates to better health and energy, and may even reduce cravings that result from nutritional deficiencies. Better digestion may also help with inflammatory stuff in the body—arthritis, for instance. This is because partially digested food bits in the gut impact the immune system and local flora, triggering production of inflammatory chemicals that can travel around the body via the blood stream.

The aromatics of mugwort reduce gas accumulation, bloating, and digestive tract spasm after meals.  Of course, the reason for these issues should be checked out. For instance, is your digestion weak?  Are you eating a lot of hard-to-digest foods like tofu, cheese, and high-gluten foods?  Do you have food sensitivities?

For either the bitters or the aromatics, simply a few drops of mugwort liquid extract on the tongue should do the trick. Take breaks from mugwort. It’s a strong herb due to the thujone content and, as such, is not a tonic-type herb for long term use.

One of mugwort’s longest historical uses is for moxibustion (moxa) in Traditional Chinese Medicine. For this, the leaves are burned over various key points of the body to move Qi (vital force) and Blood and to stimulate various body functions. The practice of moxibustion is thousands of years old.  In a form that is not as popular in modern times, the leaves are pressed into a cone shape and placed over an acupuncture point, lit and burned out completely. This can lead to painful burns and even scarring.  More commonly done now is to have the mugwort rolled into a stick shape. The end is lit and held close to the skin so that the skin and underlying tissue warm up but aren’t burned.

Mugwort is easy to grow—so much so that Artemesia vulgaris is considered a weed in many places.  It’s a beautiful addition to an herb garden, and attracts butterflies.  Give it good drainage and a spot in the sun. But,because of its potential for weediness, deadhead the small flowers before they go to seed and consider growing it in a pot to keep it from spreading via the roots.