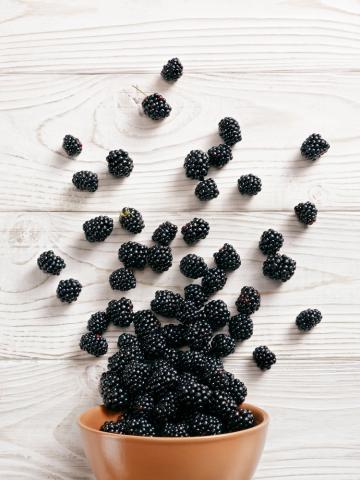 Blackberries are a member of the family Rosaceae, also known as the Rose family of the genus Rubus L. or blackberry P which contains 244 species. The plant is native to five of the seven continents, which excludes Antarctica and Australia, and is considered the most widespread food crop. It has been used in Europe for medicinal purposes, as well as for food for approximately 2000 years, and it is used as hedgerows to protect property. Growing abundantly in the wild, cultivation of the plant began in the mid-19th century both in Europe and America. The plant naturally cross pollenated to create many species which has made it difficult to differentiate species. There are two types of plants: the bush (which is more cold-climate tolerant) and the vine. Blackberries have been a staple for humans and wild animals for millennia. The fruit can be made into a variety of foods and lends itself to multiple recipes.

Blackberries, whether growing on the vine or the bush, are a very thorny plant, which prevents animals from eating the vines before the bush or vine blossoms. There are three basic varieties of blackberry plants: the erect thorny blackberry, the erect thornless blackberry, and the trailing thornless blackberry. The erect variety consists of self-supporting bushes while the trailing plants need support. Blackberries get their dark blue, red, and purple hue from pigments called anthocyanins which are an antioxidant. The plant produces dark green leaves and pinkish-white flowers; the purple-black fruit is segmented, resembling small droplets. Blackberries have a delicate, smooth skin with a greenish core that grows almost to the base of the berry. They are ripe and ready to eat when they turn a dark purple-black color—unripe fruit is tart and inedible.

1. Blackberries are easy to grow in your garden.

Including blackberries into the backyard garden takes some planning—though easy-to-grow, they do need to be controlled and there are recommended procedures for harvesting, including wearing heavy pants and gloves that the thorns cannot tear. The plant likes full sunlight and fertile soil that drains well. Erect species can be planted three feet apart while trailing varieties should be planted five-to-eight feet apart. They should be shallowly planted in late fall in milder climates and in the spring in colder climates. The vining varieties need to be supported and all varieties need to be fertilized, watered, and pruned.

2. Blackberries are full of nutrients.

Blackberries are rich in nutrients. They contain vitamins C, A, B6 or pyridoxine, B12 or cobalamin, K, and D, as well as B3 or niacin, B1 or thiamin, and B2 or riboflavin. Minerals found in blackberries include calcium, magnesium, phosphorous, iron, potassium, sodium, and zinc.

Blackberries are a deterrent for the development of cancers. The fruit is rich in phytochemicals that include anthocyanins, ellagic acid, and cyanidin-3-glucoside, known to inhibit the growth and metastasis of malignant tumors. They also contain high amounts of antioxidants, which destroy free radicals found in the body that cause many fatal diseases.

Blackberries are beneficial for a healthy heart because of the presence of magnesium. It keeps the circulatory system clean, allowing for a continuous flow of blood which prevents the development of heart attacks and stroke. They are also rich in fiber, which aids the digestive process by allowing full absorption of water into the bowels and adds bulk to the stool. This results in a more regulated digestive system, preventing constipation and aiding in the control of weight maintenance.

Blackberries are effective in the reduction of the aging process by improving memory, behavior, and neuronal functions. They boost the immune system, preventing infections and diseases. The presence of calcium, magnesium, and phosphorus maintains healthy bones by helping the bones to absorb calcium and maintaining proper bone cell function.