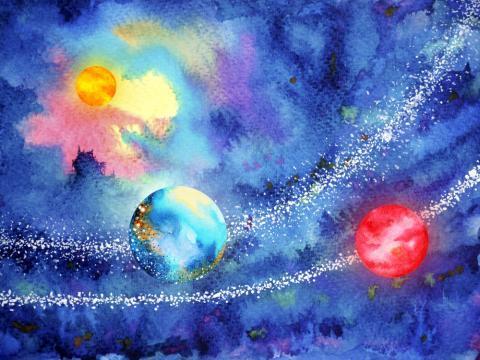 The Karmic Tools Weekly Forecast covers the current planetary transits which affect people in different ways and to various degrees of intensity.  Take notice when it is a Personal planet (Sun / Moon / Mercury / Venus / Mars) interacting with a Social (Jupiter/Saturn) or Collective planet (Uranus / Neptune/Pluto).  And pay extremely close attention when it is a Social planet interacting with a Collective planet because that means something *big* is brewing that will move large groups of people along their evolutionary paths. Tuning in to the energy and rhythm of the planets can serve as a useful *guide* as you move along your Individual Path.  It also helps to understand your place within the context of the larger Social & Collective Story. Below, you will find out how these energies tend to manifest, as well as guidance and direction.  *NOTE*  There are some days when there are NO CONTACTS (besides the Moon), please note that there are no missing entries, we just list the actual Activations of each week + the day they happen.

This is a healthy, positive, transformative energy. You will have access to energy that will help you change your current circumstance for the better and/or clear up an issue that has been challenging you for a while now. It's great for purifying, cleaning & clearing your personal space, as well as organizing your life in general. You may have to examine the "big picture" to see where an adjustment, for the good of all involved, is necessary. If you're not feeling up to working on outer issues, this also gives you the opportunity to do some introspective thinking and deep self-reflection. Superficial once-overs will not do, you must address the root cause for where you find yourSelf at this time in your life and decide if it is working for you or against you.

This is a somewhat rare, potent and generally positive activation between two very different planets. Saturn rules structure, boundaries, limits, time and building a foundation, while Uranus is all about radical change, innovative ideas, forward-thinking & (often sudden) awakening of consciousness. One wants to stick with the tried 'n true, while the other is always trying to improve things by pushing beyond those original ideas and expanding them in brilliant ways. Saturn will make an appointment, while Uranus always shows up unannounced. But if you think back to 2008-2010 when they were in opposition to one another, you may remember some extremes between the old and the new trying to find that middle ground that honors what is stable about the original, but allows for creative change that, while disruptive initially, leads to great things we would never consider if we didn't think outside the box a little. Because this is an easy angle, you basically have access to a delicious combo of patience & dedication, along with revolutionary new ideas & positive change. However, the caveat with all trines is that it's going so smoothly that you don't consciously co-create. You don't want to do that with these two because they directly affect both your reality and your freedom. If you had a hard time with the opposition in 2008-2010 or the square from 1999-2000, then look at this one as earned blessings and take advantage of creating order out of the chaos stirred up from those years. If you take advantage of this opportunity, then the next set of challenges (square in 2021) will go more smoothly and be more productive. If not, you may have heard me say 'pay now or pay double later' which would apply to this.

ALL ARTICLES BY Kelly Beard