Rethinking Food: What Permaculture Could Mean For The World 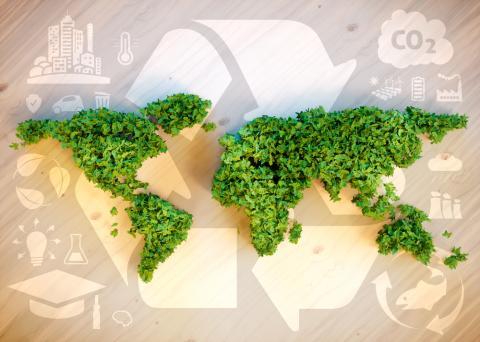 We as a species evolved with the planet. The way we eat, the way our metabolic processes function, even the way our brains work in relation to our eco-cultural environment. The human race has a habit called anthropomorphism: to apply human characteristics to things that are not. At first glance this seems a little arrogant, certainly, an egocentrically asserted assumption, but…is it really? How can you shame a habit maintained by an entire species that just wants to understand. That just wants to feel connected to something, to wrap our heads around something other than ourselves. To maybe just feel a little less alone on this pale blue dot by hoping that something else is like us.

Somehow we’ve slowly started to lose this habit. At some point in the development of human culture we stopped trying to see ourselves in the world around us, and began to assert our own limitations on our environment. Though to discuss where this idea that we know better than the natural world originated is another article on its own, we are living in the ripples of this shift in mentality. Going out and existing in nature is a recreational pastime and going out and being part of nature now largely exists in the context of religious and spiritual exercises—certainly far from being an integrated part of daily life for most. Those who do practice connecting with the natural world are written off by a culture of presumed empirical superiority, as hippies, nature freaks, religious fanatics, marginalized…

The odd thing is that the solution to the environmental, social, and even physiological issues that our disconnection from the planet has created is not new. Though modern thinking tends to look with starry eyes to the idea that maybe we’ll weed ourselves out of this mess with enough technological advancement, the solution is actually as old as human culture. Straight outta the fertile crescent, from day one we had the right idea. From the Inca to the Neolithic Sumerians, the practice of permaculture has been applied in various forms for thousands of years. Permaculture is the forgotten social model that once allowed humans to live symbiotically within the ecology of our planet. Permaculture, even more simply, is the answer we need, even if not the answer we deserve.

How did we get here?

To put it plainly, somewhere we went very wrong. We tend to think about the industrial revolution as the principle turning point in our species's path to ecological destruction, but one very specific line of thinking enabled us to scale as a global society—the NPK model of artificial fertilization: nitrogen, phosphorus, potassium. Introduced in 1840 by a German chemist, this model ignited the revolution of industrial agriculture with a purpose.

“Now a farmer just had to mix the right chemicals into the dirt, add seeds, and stand back to watch the crops grow. Faith in the power of chemicals to catalyze plant growth replaced agricultural husbandry and made both crop rotations and the idea of adapting agriculture methods to the land seem quaint…large-scale agro-chemistry became conventional farming.”

The idea of a diet grown out of negotiations with our environment quickly faded from human discourse. Less than a hundred years after this shift in the terms of our agricultural thinking, the great American Dust Bowl left a 56-million-acre scar through the heart of the United States. The Great Plains, one of the most diverse subterranean ecosystems in the world, is dead. Today it still stands as a quiet monument to our negligence. Just over a decade later, World War 2 ended and the technology developed to produce for a war time economy was converted. Nitrogen processing plants used for bomb building were converted to produce fertilizer and biological warfare became pesticide production. Inexpensive fossil fuels led to crop subsidies led to lobbying and new legislation. The brand new and improved American diet was born with fanfare.

“We learn from our gardens to learn to deal with the most urgent question of the time: how much is enough.”

When cooking and gardening are subversive acts in American culture, what do we have left? A generation raised on Spam, fruit cocktail from a can, and pre-portioned TV dinners. Soaring rates of cancer, heart disease, type 2 diabetes, stroke, and 2.98 million dollars of US GDP spent on healthcare in 2014. The system grown by the multinational mega conglomerates of “food” production has become a global standard. Even as the movements of organic, sustainable, farm-to-table, and local eating gain social momentum, the mentality of a processed diet, pushed on developing nations as ‘modern,’ has brought the rest of the world into the fold.

Even those of us with the mentality to push ourselves and our communities to eat better still rest ourselves on ideals of misunderstood nutritionism and the concept that we need to save the planet. If one were to assume that the planet has always known more than us about the nuanced balance of the natural world, then arguably we have arrived at the point that we need to save ourselves as a species. The planet will survive long after our systems of unsustainable subsistence have run their course; from here we decide where we want to be when they have.

Permaculture as a way out:

“When we allow nature to work, which means, when we farm in a way that promotes all of its frustrating inefficiencies—when we grow nature—we end up producing more than we could with whatever system we might replace with it.”

Now, to take a breather from the sobering if necessary touchpoint of our current situation, all is not lost (Though admittedly there are many who would disagree). The degree of effort and expense being put into sustainable agriculture solutions is continuously growing. The awareness surrounding the predicament that we’ve put ourselves into is unquestionably on the rise. The question is now just a matter of time and method. Let's talk method:

What is permaculture, exactly? Very basically: Care for the land and it will care for you. Tend the land as a participant in a system, not a controlling moderator.  Set processes working that will benefit your great-grandchildren and their great-grandchildren, whether or not you live to see any benefit from your work. Mennonites say that a child begins being raised 100 years before it’s born and many Native American cultures work from the idea that you are creating the world for the 7th generation to follow. Here’s how to do it yourself.

Before we dive in, to be clear, this is a framework. Using this method will work in many instances but the earth is a complex thing and the specificities of developing a permaculture garden will differ with soil quality, soil makeup, light exposure, climate, land history, geographical context and innumerable other variables. Of course, as with anything, you can go as deep into understanding these practices as you’d like. All that said, starting your own permaculture garden is actually a simple, inexpensive, and rather pleasant experience.
The resources you’ll need you can usually acquire for little to nothing—after all, low impact is very much one of the main points of this project. You’ll need soil to cover the area you intend to be working with, cardboard to do the same, mulch for a top layer, seeds, and maybe some “fertilizer” (i.e. coffee grounds, banana peels, egg shells, trimmed weeds) depending on your soil quality and the time you have available.

Step by step, this is the process:

Beyond this outline, the complexity of the ecology we are relearning how to participate in is infinitely complex. There are a quickly growing bank of resources available for the curious or passionate gardener or ecologically conscious global citizen to help you on your way to a flourishing permaculture garden. If you’re curious about permaculture on a larger scale, look into Dan Barber’s explanation of the Spanish Deseah in The Third Plate or check out the aquaculture work of the Veta la Palma. Learning to apply this on a large scale is looking more and more like it will be our way out of the ecological bind we’ve put ourselves in.

Though for the time being we don't yet have the ability to feed a population approaching 8 billion with these methods, were half the research budget put towards industrial farming shifted instead to the development of practices that could be used to feed our world in a sustainable way, I suspect we might come up with something in short order. We have a long road ahead of us before we arrive at a place that will allow us, and the world around us, to flourish in tandem. If we continue to educate ourselves and those around us about the importance of thinking on a larger scale, we can start a new conversation, a new line of thinking. As we habitually see parts of humanity in the world around us, perhaps it’s time to begin looking for the natural world in ourselves. It is all of our responsibility to relearn how to live with our planet, to retrace our steps to our anthropomorphic habits, and allow that to become the new vernacular.

For the moment, however, eat well, drink well, live well.